Please ensure Javascript is enabled for purposes of website accessibility
Log In Help Join The Motley Fool
Free Article Join Over 1 Million Premium Members And Get More In-Depth Stock Guidance and Research
By James Brumley - May 8, 2020 at 7:05AM

The parent company to Victoria's Secret is going to get rid of the lingerie brand, one way or another. It's just a question of how and when.

In February, it looked like the deal was all but done -- then it wasn't. Last month, Sycamore Partners asked Victoria's Secret's parent company L Brands (BBWI 3.45%) to let it out of the agreement that would have sold 55% of the lingerie retailer to the private-equity outfit. L Brands, which also owns Bath & Body Works, initially pushed back with a threat of litigation. On Monday, however, the retailer amicably agreed to cancel the contract.

This effectively drags L Brands back to square one: holding a deteriorating Victoria's Secret brand it doesn't really want to own, with even less hope of rebuilding it now than before the coronavirus contagion took hold. It also -- perhaps more alarmingly -- puts the $2.5 billion worth of lease obligations Sycamore was going to absorb back on L Brands' books.

In that light, the oddly low valuation of $1.1 billion Sycamore's offer implied for the Victoria's Secret brand actually makes sense. The lingerie retailer may have produced $6.8 billion in sales last year, but with operating income of only $115 million and saddled with $2.5 billion of future rent obligations, it's a risky project to take on. Now, it's L Brands' project to tackle again. 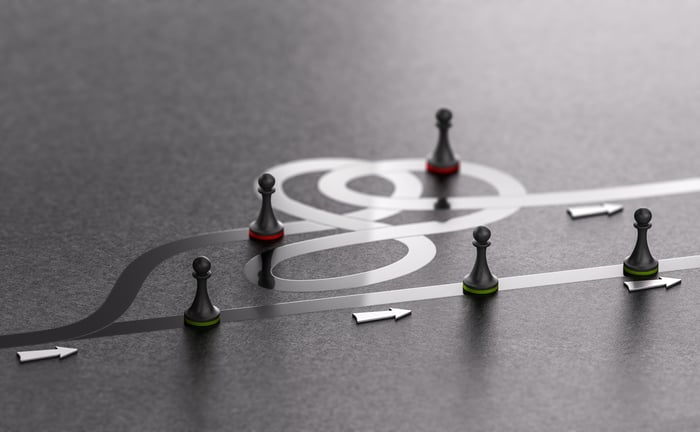 This isn't necessarily the end of the world for L Brands or its shareholders, though. A second, more scrutinizing read of the official L Brands statement on the matter actually creates more questions than it answers, to be sure. But it also sets the stage for what could ultimately be an even more advantageous exit from the lingerie business.

Back to the beginning

Fair enough. If it was a good idea to shed the Victoria's Secret brand before the COVID-19 pandemic rattled the globe, then it's a great idea to focus only on a more proven Bath & Body Works afterwards.

Except positioning Victoria's Secret to "operate as a separate, stand-alone company" can mean a lot of things. It may mean a spinoff into a publicly-traded company. It could mean the lingerie brand remains under the L Brands umbrella but is only tracked as equity ownership on L Brands' books. Or it might mean the parent company is once again shopping Victoria's Secret around to other prospective suitors. The retailer didn't say.

That may be because L Brands doesn't know itself, exactly.

Investors should know more by May 21, though. That's when the company will be hosting its next quarterly earnings call and when it will "provide further details on go-forward plans." There's much to think about between now and then, however.

Victoria's Secret may have been worth $1.1 billion three months ago, but it's been a long, devastating three months. Victoria's Secret -- when it's barely profitable and comes saddled with $2.5 billion in lease obligations -- is certainly worth even less now. Its stores have been closed since mid-March, and the chain has furloughed most of its store employees. It's also generating little in sales, limited to an e-commerce operation that's struggling as well. The company's even tapped nearly $1 billion worth of additional credit that could be divvied up between L Brands and any potential buyer of Victoria's Secret.

In short, its future looks grim.

There's a silver lining to this not-entirely shocking development, though. That is, another chance to shed the lingerie brand might allow it to be sold in its entirety instead of leaving L Brands holding 45% of a struggling entity ... an entity that's majority-owned by a private-equity firm with something of a reputation for dismantling companies rather than rebuilding them. The price Victoria's Secret commands in the current market environment may be lackluster, but at least the parent will be rid of it once and for all. From that point on, L Brands will essentially be Bath & Body Works, which is a growing entity. 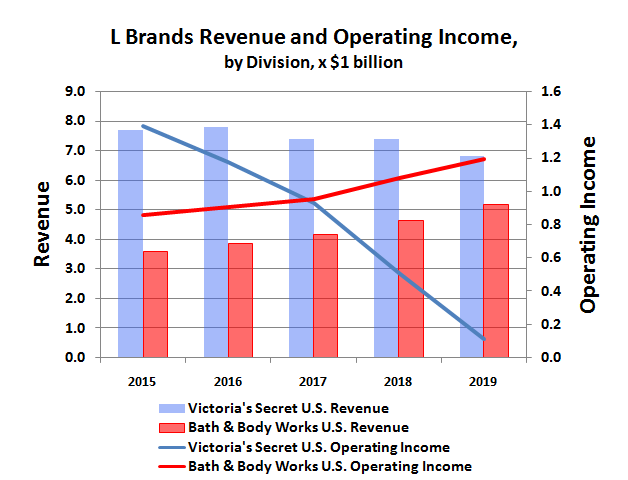 But what about the inevitable writedown that will be linked to a tepid sale price for (or disposal of) Victoria's Secret? As a reminder, the company already bit part of that bullet, booking a $725 million charge linked to the sale during the fiscal 2019 fourth quarter, which ended Feb. 1. More charges may be looming, but at least some are out of the way.

At this point, any approach will do

Even if there are no buyers at a lowered price though, at this point, there's still an advantage in wrapping up a distressed Victoria's Secret along with all of its liabilities and selling it for a song, or spinning it off as a publicly-traded company to existing L Brands shareholders. That is, it still rids the parent of an asset that's now subtracting more value than it's adding. Even if said entity is destined for bankruptcy, such a separation could serve as something of a legal and financial firewall between Victoria's Secret's woes and Bath & Body Works' promise.

The more than 50% tumble L Brands shares have suffered since their mid-February peak suggests investors have already priced in such a prospect, too. The entire company's current market cap stands at a mere $3.2 billion as of this writing, compared to the profitable Bath & Body Works' 2019 top line of $5.2 billion in the United States alone.

In other words, the repricing already appears to be done. L Brands just needs a legitimate way to make a clean and complete break from the Victoria's Secret operation, without simply closing shop. Now, it's on to plan B.