Please ensure Javascript is enabled for purposes of website accessibility
Log In Help Join The Motley Fool
Free Article Join Over 1 Million Premium Members And Get More In-Depth Stock Guidance and Research
By Billy Duberstein – May 9, 2020 at 10:15AM

Hope sprung eternal for a recovery in cruising and a treatment for COVID-19.

Shares of Norwegian Cruise Line Holdings (NCLH 0.53%) rose 49.6% in April, according to data from S&P Global Market Intelligence. The cruise line operator had been absolutely battered in the month of March, plummeting 70.6% as the COVID-19 pandemic swept across the world.

The outbreak led to cruises being halted for an unknown amount of time. And since cruise companies have certain fixed costs and high debt, they may be candidates for bankruptcy. And yet, Norwegian, along with its peers, bounced back in April off their lows. How'd that happen? 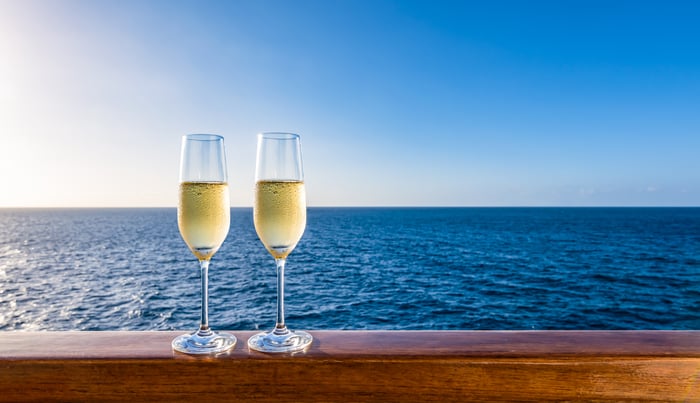 Norwegian didn't actually report much new information during the month of April, but several events in its peer group and regarding the fight against COVID-19 boosted optimism around its shares.

First, rival Carnival (CCL -6.06%) successfully raised about $6.5 billion in the form of both high-yielding debt as well as equity in early April. While that financing was expensive, apparently the fact that any investor was willing to extend lifelines to cruises and bet on an eventual recovery boosted sentiment that other cruise companies like Norwegian would be able to secure financing, too.

Second, declines in new COVID-19 cases in New York, along with some positive data on antiviral drug remdesivir in a Chicago trial, boosted hopes that the worst of coronavirus may be behind the economy. That, in turn, boosted sentiment for all consumer discretionary stocks that would depend on the economy opening back up, such as certain retailers, movie theaters, and, of course, cruises.

Norwegian did go ahead and raise more capital in early May, as Carnival had a month earlier, though at even higher interest rates. Still, the company claims it has now bought itself another 18 months of liquidity at zero revenue, which is a pretty remarkable statistic, and could bridge the company all the way until a vaccine is available. However, those 18 months have been highly dilutive to shareholders.

Still, if COVID-19 cases decline to a manageable level and more effective treatments can be developed that can help mitigate the worst outcomes, cruise stocks could have a lot of upside if they set sail earlier than expected. After all, cruises remain popular, with bookings for 2021 solid or even higher than 2019 -- assuming cruises are even allowed to set sail by then.

Yet while upside could be significant, these stocks are only appropriate for investors with extremely high risk tolerance, as bankruptcy is still a possibility, despite April's near-50% surge. Still, the picture for cruise stocks looks much better today than it did at the end of March.