Please ensure Javascript is enabled for purposes of website accessibility
Log In Help Join The Motley Fool
Free Article Join Over 1 Million Premium Members And Get More In-Depth Stock Guidance and Research
By Zhiyuan Sun - May 10, 2020 at 6:12AM

An Indian manufacturer of generic prescription drugs can accomplish what American counterparts cannot. Here's why.

Generic drugs are crucial to our healthcare system, as they keep the costs of branded drugs down once their patents expire. Although there are many manufacturers of generic drugs globally, competition in this $340 billion global market can be quite intense. Fortunately, there is one company in this sector that has a unique advantage worthy of a look for potential investors in pharmaceutical stocks.

Compared to most U.S.-based manufacturers of generic drugs, the biggest advantage Dr. Reddy's Laboratories (RDY 0.37%) has is its geographical location. The company manufacturers its copycat medicines in India and exports them to all corners of the world, including the U.S. By doing this, it's able to save ample amounts of money in both labor and raw materials, as the cost of goods and services in India is far lower than in developed nations. 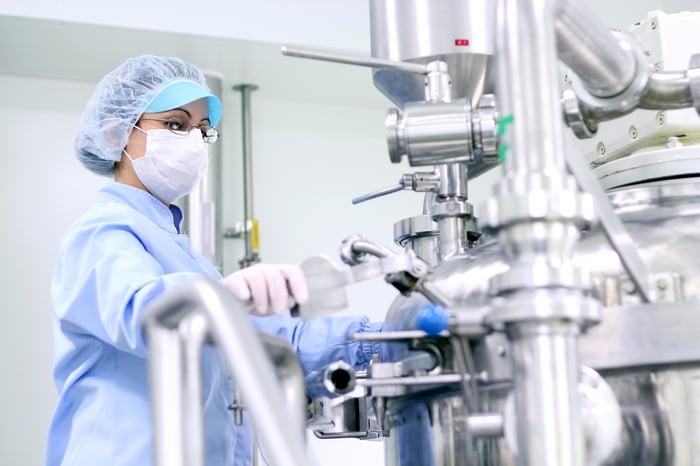 Why Dr. Reddy's has the upper hand

Another striking element about Dr. Reddy's is how little debt it has. As of now, the company's borrowings are more than covered by its cash and investments and it has a $47 million surplus of net cash. Meanwhile, both Teva and Mylan are heavily leveraged, possessing upwards of tens of billions of dollars in long-term borrowings even when cash and investments are accounted for.

In terms of research and development, the company is excelling on this front, with nearly 100 Abbreviated New Drug Applications pending with the U.S. Food and Drug Administration. For the sake of comparison, the agency only approved 1,044 copycat drugs last year. The company devotes 10% of its revenues to research and development, which is highly competitive among its peers.

What are some of the risks involved?

The greatest risk facing Dr. Reddy's is one all sector players face -- the issue of drug pricing. Currently, the U.S. is the only country in the world where the government does not have the ability to set drug prices, leading to soaring profits for drug manufacturers, and in some cases, price gouging. However, this could change as House Democrats passed a bill in December giving Medicare the ability to negotiate prices on 50 to 250 drugs, though the legislation has not made progress in the Senate.

The bill is projected to wipe out nearly $1 trillion in profits in the industry over the next decade. However, the U.S. segment of Dr. Reddy's revenues accounted for only 43% of all sales last year. In the rest of the world, the phenomenon of governments controlling drug prices is already the norm. Hence, the remaining 57% of Dr. Reddy's operations should witness no effect from political woes in the U.S.

Is the stock a buy now?

All of its positives do not come cheap, as Dr. Reddy's is currently trading at a premium with 3.6 times price-to-sales and 20 times earnings. In context, this isn't a bad price to pay, as I think the company will be part of a growing trend among pharmaceutical companies to move manufacturing facilities out of China. The ongoing COVID-19 pandemic, which originated in China, has no doubt raised the question of when the next one will occur.

Furthermore, the rising cost of labor in China has also led to pharmaceutical companies looking elsewhere for facilities, such as in India. In addition, the company has fully adjusted to the effects of the COVID-19 lockdown with little to no interruption in its manufacturing supply chain. In conclusion, I think Dr. Reddy's business model ranks above that of its closest competitors and should be a good stock to buy for healthcare investors looking for international exposure.

Why Is No One Talking About Dr. Reddy's Stock?