Please ensure Javascript is enabled for purposes of website accessibility
Log In Help Join The Motley Fool
Free Article Join Over 1 Million Premium Members And Get More In-Depth Stock Guidance and Research
By Scott Levine – Updated May 12, 2020 at 2:48PM

Like the market writ large, fuel cell stocks, Ballard Power Systems (BLDP 3.27%), Bloom Energy (BE 3.75%), FuelCell Energy (FCEL 2.64%), and Plug Power (PLUG 3.85%) climbed higher in April after experiencing declines in March. For some energy-minded investors who were focused on the oil market crash, the uptick in these niche renewable energy players may have gone unnoticed. Let's take a closer look to see what was behind the stocks' movements.

When analysts talk, investors often listen. So when Stephen Byrd, an analyst at Morgan Stanley, revealed his optimism about fuel cell stocks, shareholders took notice. According to Thefly.com, Byrd told investors in a research note that "Federal legislative support for renewables may not be coming in the near term, but could be included in the summer as part of a broader stimulus package that might also include the oil and gas sector." For investors in fuel-cell stocks, the expiration of the investment tax credit in 2021 is a significant concern as is the consistent failure of Congress to renew the incentive.

Specifically, Byrd identified Bloom Energy and Plug Power as two companies which could benefit from the legislation, should it provide support for carbon capture. Although the analyst didn't mention FuelCell Energy by name, it's unsurprising that investors were motivated to pick up shares in the company which has gained notoriety thanks to its partnership with ExxonMobil to develop carbonate fuel-cell technology for large-scale carbon capture projects. 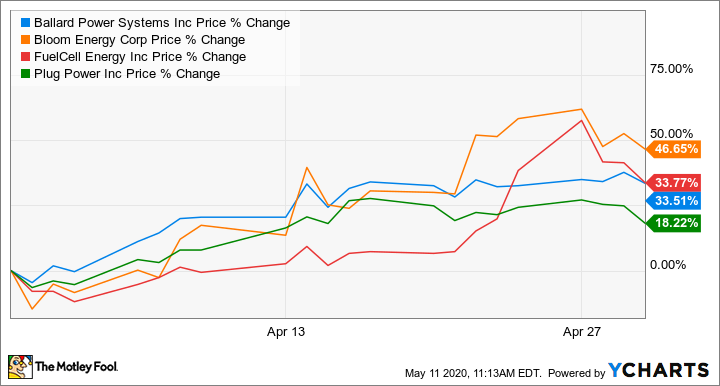 Reporting progress on the development of projects in its pipeline, FuelCell Energy announced the start of commercial operation of the Triangle Street project in Danbury, Connecticut. With a rated capacity of 3.7 megawatts, the Triangle Street project is the first deployment of the company's SureSource 4000 plant. Presumably, the project won't be the company's only deployment of this plant for long; two SureSource 4000 plants are currently in development for the U.S. Navy and are expected to be completed in the third quarter of 2020.

What's a fuel-cell focused investor to do?

While an analyst's hopeful outlook for the industry moved some investors to act, others were inspired by Ballard and FuelCell Energy's progress in bringing their fuel cell solutions to market. Of course, these weren't the only catalysts sending shares of fuel cell stocks higher. Other investors were likely motivated by the alarming volatility and uncertainty in the oil sector as the price of oil turning negative, deciding to retain exposure to the energy industry by eschewing oil companies and turning toward renewable energy names, specifically those dealing in fuel cells. For investors whose interests are piqued by the recent rise in these stocks, though, it's best to remember that these businesses still face plenty of headwinds; consequently, they should only remain the targets of investors with ample tolerance for risk.