Please ensure Javascript is enabled for purposes of website accessibility
Log In Help Join The Motley Fool
Free Article Join Over 1 Million Premium Members And Get More In-Depth Stock Guidance and Research
By Billy Duberstein – May 14, 2020 at 8:15AM

Think a recovery is in the cards? These three stocks have huge upside if it happens.

In his recent investor memo, famous value investor Howard Marks said, "All great investments begin in discomfort, since the things everyone likes and feels good about are unlikely to be in the bargain counter."

While the overall stock market has bounced back surprisingly strongly from the outbreak of COVID-19 around the world, many stocks in hard-hit sectors remain far, far below their prior highs. Actually, many such stocks are down by 50% or more, whereas many technology companies that benefit from the stay-at-home economy have nearly fully recovered, or have even gone higher, shockingly, than before the outbreak hit.

Certainly, there's a high degree of risk surrounding anything related to travel, or to any sector in economically sensitive parts of the market, such as automobiles and other big-ticket items. But at such discounted prices, investors could reap massive gains if the economy opens up more and more through the end of the year.

While none of the following three stocks are appropriate for the risk-off investor, each is very well-managed, and each has also recently gotten a boost of confidence from the capital markets, raising debt and equity to bridge them through 2020 at least. That could make them huge contrarian winners on a quicker-than-expected reopening or vaccine.

Feeling bold? Here are three high-risk but high-upside picks to add to your watchlist. 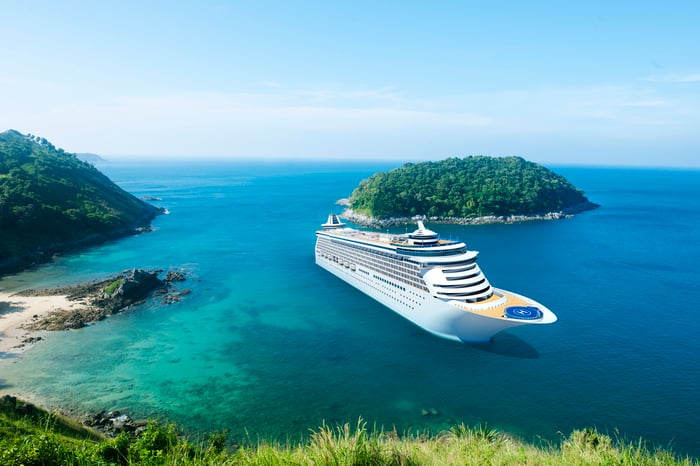 Online travel agency Expedia (EXPE -0.80%) has been hard-hit amid the coronavirus outbreak, though it's perhaps better-positioned than some other travel-related stocks. Expedia is essentially a portfolio of websites, so there aren't huge overhead expenses for the company, such as real estate, airplanes, or cruise ships.

Still, the sudden stop of travel from the end of March is causing Expedia to burn cash. At the end of March, Expedia revealed its gross bookings volumes were down a shocking 85%-90% from the prior year. Yet after cutting lots of costs out of its business -- the largest component of which is advertising -- management believes Expedia's monthly cash burn is now "below $275 million."

Fortunately, Expedia got a big vote of confidence recently, raising some $4 billion in the form of senior debt and preferred convertible stock, which was bought by big private equity firms Apollo Global Management and Silver Lake, who also took seats on the company's board of directors. That new raise should be more than enough to get Expedia through the next year, even at extremely low revenues.

Not only did Expedia get a vote of confidence from big-time PE firms, but the company was already cleaning house to make it a leaner and meaner company. In December, even before COVID-19, large shareholder and director Barry Diller effectively ousted the former CEO and implemented a slew of cost-cutting measures to restructure the business. In conjunction with the recent capital raise, Expedia appointed longtime Diller confidante Peter Kern as the permanent CEO to continue Diller's strategy.

Expedia shares have bounced somewhat since the news of the capital raise, but its $62.50 share price is still less than half of the company's 52-week high of $144. Should travel increase back to prior levels over the next one or two years, the "new" Expedia under Kern could go much higher as revenues increase with a more efficient cost structure in place.

Want a stock that's similar to Expedia, but with even more upside (though also more risk)? That may require diving headlong into one of the worst parts of the COVID-19 economy: cruise lines.

Since all the major cruise lines are incorporated outside the U.S., they were excluded from the initial $2.3 trillion CARES Act stimulus. Still, Carnival (CCL -7.16%), the largest cruise line in the world, was able to raise $6.5 billion from private investors in early April – albeit expensively. The raise included $4 billion in 11.5% senior notes, $1.95 billion in 5.75% convertible notes, and $500 million in equity. Carnival CEO Arnold Donald has said that's enough to get the company through the year, even without any revenues. Having investors -- as well as one director -- buy a large amount of stock at $8 was a big vote of confidence in the operator, and was even enough to get me to buy a little Carnival stock myself.

Though Carnival is pausing most of its cruises through Aug. 31, the company has actually announced it plans to restart some cruises Aug. 1 out of Texas and Florida. After the announcement, one cruise travel agent reported a 600% increase in bookings over the prior three days and a 200% increase over the year-ago time period.

Of course, that doesn't really mean much -- after all, it's only a few ships scheduled to sail, and rooms were heavily discounted. However, any sort of activity within the next year would be a plus, given that shares are down some 77% from their 52-week highs.

There is a lot of risk in Carnival's stock -- if therapeutics or a vaccine proves elusive, cruises may be prohibited from sailing for a longer period. And if cruising does begin and another outbreak occurs, that would set things back even further for Carnival.

Still, we're talking upside here! Clearly, people still love to cruise. The industry has been a steady grower for more than a decade, with the amount of cruise passengers increasing even through the financial crisis of 2008-2009. If cruising resumes, Carnival stock could move significantly higher, provided ships can begin sailing within a year.

Finally, iron ore miner and now, high-end steel manufacturer Cleveland-Cliffs (CLF -5.89%) may be worth a look for the aggressive investor. Clearly, there's a lot wrong with Cleveland-Cliffs' business right now. Cliffs just recently closed on its acquisition of AK Steel in late March, giving it high exposure to the automobile industry, which is all but shut down right now. And global construction projections are likely paused too, putting further pressure on Cliffs' traditional iron ore business.

Still, Cliffs' stock price has also been hammered, down some 65% from its 52-week highs. In addition, the company has also, like the above-mentioned stocks, been able to raise a lot of capital in the form of high-yield debt. However, during the market freefall, Cleveland-Cliffs also bought back some of its other outstanding debt at a 25% discount to par, actually lowering its overall debt load by $181 million.

On April 15, management also released a liquidity test in an adverse scenario, in which auto production stayed at zero through June, then only slowly ramped up to produce 6 million new autos from April through December. That's compared with 16.8 million in 2019. Management also assumed lower iron, steel, and pellet premium prices. Even in that adverse scenario, management forecast liquidity troughing at $370 million in September and then improving, thanks to severe cost-cutting measures and idling certain mines and plants. In addition, CEO Laurenco Goncalves said on the recent conference call with analysts that the company has already seen some auto customers restart production since that forecast was made.

Despite having a higher debt load than it would like, Cleveland-Cliffs seems poised to at least survive the COVID-19 crisis. In addition, Goncalves thinks there could actually be renewed interest in auto ownership in the second half of the year, if people become more hesitant to take public transportation and instead opt to buy or lease more cars. And if the U.S. passes an infrastructure bill coming out of the crisis, that would be another plus for steel stocks as well.

Of course, Cleveland-Cliffs remains risky. The company took on a lot of AK Steel's debt when it acquired the company and is now burning cash in the near-term as the country digs its way out of the pandemic slowdown. Still, Cleveland-Cliffs is a well-managed company that makes environmentally friendly iron ore pellets and now, with AK Steel, value-added ultra-high strength steels as well. In a normal environment, that should be a more profitable business than a straightforward commodity producer, and it's what investors should expect if and when things turn more normal.

Expedia, Carnival, and Cleveland-Cliffs all have debt, and thus significant risk as business remains muted during the pandemic. However, these very well-run businesses will rocket higher if better coronavirus treatments are found or a vaccine is made in the next year. If that occurs, these stocks have more upside than the stay-at-home tech stocks that have already done so well so far.