Please ensure Javascript is enabled for purposes of website accessibility
Log In Help Join The Motley Fool
Free Article Join Over 1 Million Premium Members And Get More In-Depth Stock Guidance and Research
By Rich Smith – May 14, 2020 at 8:32AM

H&R Block, Capital One Financial, and United Airlines sell 30%, 40%, and even 70% below what they cost at the start of the year.

From late February to late March, it took the COVID-19 coronavirus pandemic one short month to subtract 35% from the value of the American stock market, throw the country into recession, and put the entire S&P 500 on sale. Then it took just a little over a month to erase 20 percentage points' worth of those losses.

But is this the end of the story? Is the "sale" over, and is it now too late to buy stocks and cash in on the rebound?

True, the stock market as a whole may no longer sell for bargain basement prices, but hundreds of individual stocks are still marked down 30% (or more) off the prices they fetched at the beginning of this year. The "sale," in fact, is far from over.

And here are three top stocks you can still buy on sale today. 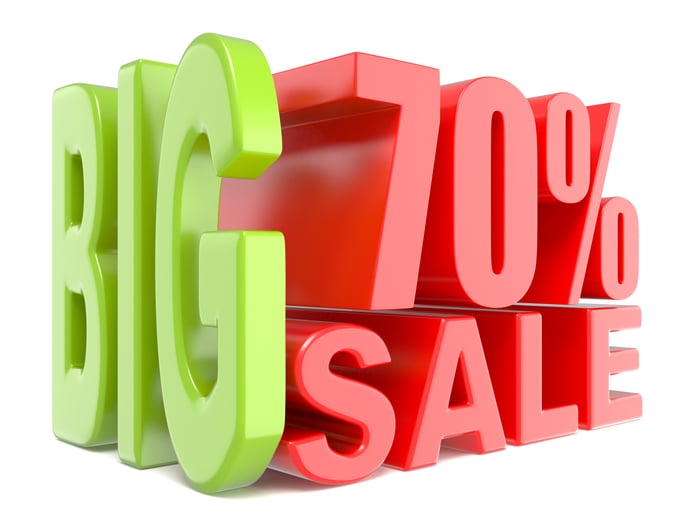 The Internal Revenue Service has announced the traditional April 15 deadline for filing individual income taxes is delayed to July 15, 2020. But does that change reduce penalties for underpayment? How does it affect estimated tax payments for this year? And what about the $1,200 stimulus payments that some of us are still waiting to receive -- how do those figure into the mix?

Burning questions like these are a big reason investors might want to take a look at H&R Block (HRB 2.26%) stock right now. Arguably the biggest name in income tax preparation, H&R Block got hit right along with the rest of the stock market in February's sell-off and hasn't recovered since. In fact, its shares remain down roughly 32% since the start of the year. That might not be such a bad thing, however, if you are shopping for stocks on sale.

Priced at just 7.5 times trailing earnings today, H&R Block stock looks bargain-priced for the 10% annualized long-term growth that Wall Street analysts expect from it. The stock could be even cheaper if -- as I suspect might happen -- confused taxpayers flock to H&R Block for advice this year, making the company's forecast decline in earnings not so steep as feared.

To top it all off, H&R Block stock still pays a whopping 6.6% dividend yield, and unlike so many stocks these days, it shows no signs of planning to cut that dividend.

40% off sale -- Capital One Financial

Low interest rates and a brewing recession have a lot of investors feeling nervous about investing in banks these days. When rates are low, it's harder for banks to charge high interest on their loans. Even if they try to, that won't do much good if customers can't pay and default on those loans.

Result: When Capital One reported its first-quarter earnings last month, the headline number was pretty bad -- a 2% decline in net revenue and a $1.3 billion net loss.

But the news wasn't all bad. Capital One actually would have made money if it hadn't taken a $5.4 billion "charge" for loans the company expects will not be paid back, and added to the company's "reserve" against future losses. In other words, Capital One spent much of the quarter battening hatches and making sure it was ready to ride out the tough times ahead. (Which is why, by the way, Capital One3stock went up, not down in response to reporting its big "loss.")

Meanwhile, Capital One stock sells for roughly 10 times trailing earnings. With a projected growth rate of better than 9% (according to data from S&P Global Market Intelligence), and a roughly 2.6% dividend yield, this stock has an attractive total return ratio of just 0.8. With most Americans still sheltering in place and doing their shopping from home, I think this credit card company-cum-online banking operation has a good chance of coming out of the corona crisis even stronger than it went into it.

Of course, the absolute biggest discounts are still found at companies perceived to carry the biggest risk of getting ruined by coronavirus. That means cruise lines and airlines like United Airlines (UAL 7.45%).

Since 2020 began, United Airlines stock has shed more than 75% of its market capitalization. No surprise there. United reported a $1.7 billion net loss in Q1 as revenues declined 17%, and things look to get worse before they get better. For the month of May, United has already announced it has cut its flight schedule by 90%, and it expects a similar reduction in June.

Still, 90% is better than the 97% reduction United reported in the first half of April, so things may be getting slightly better. And to bridge the gap from "slightly" to "significantly," the company has claimed $5 billion in government cash under the Payroll Support Program, applied for $4.5 billion more under the CARES Act, and announced both the sale of 39.25 million  shares of stock and a $2.25 billion bond offering to raise additional cash.

Whether this will see United Airlines through the tough times depends largely on how long this crisis lasts. For now, United seems to be doing everything in its power to ensure it emerges into the light at the end of the tunnel.

Ultimately, a bet on United Airlines stock is a bet that Americans will eventually want to fly places again at some time in the future. At a stock price around 5 times earnings, I think that's a good bet to make.

Why Plug Power, Capital One Financial, and athenahealth Jumped Today