Please ensure Javascript is enabled for purposes of website accessibility
Log In Help Join The Motley Fool
Free Article
Join Nearly 1 Million Premium Members And Get More In-Depth Stock Guidance and Research
By Neha Chamaria – Updated May 17, 2020 at 9:02AM

The U.S. industrial sector hasn't been hit this hard in recent memory, but utilities continue to be a silver lining.

The significance of that number becomes clear only when you read the Federal Reserve's statement: "Total industrial production fell 11.2 percent in April for its largest monthly drop in the 101-year history of the index." That's jaw-dropping.

This industry felt the maximum impact of COVID-19

The IPI uses 2012 as the base year to measure the real output from manufacturing, mining, and utilities sectors for a given period. The Federal Reserve publishes such industrial production data every month. It calculates individual indexes for various industries and aggregates them using a preset formula to derive monthly data. Key numbers for April include:

Within manufacturing, motor vehicles and parts posted the sharpest decline in output -- production of light vehicles slumped a whopping 70% to an annual rate of only 70,000 units compared to assembly rate of 11 million units in February 2020.

That's not surprising given how every major automaker has had to shut down plants for weeks in line with coronavirus lockdown protocols. Ford (F -0.86%), for example, only recently started to reopen some of its factories in North America, after suspending production in March. Rivals like General Motors (GM -2.06%) and Fiat Chrysler Automobiles have a similar story to tell. 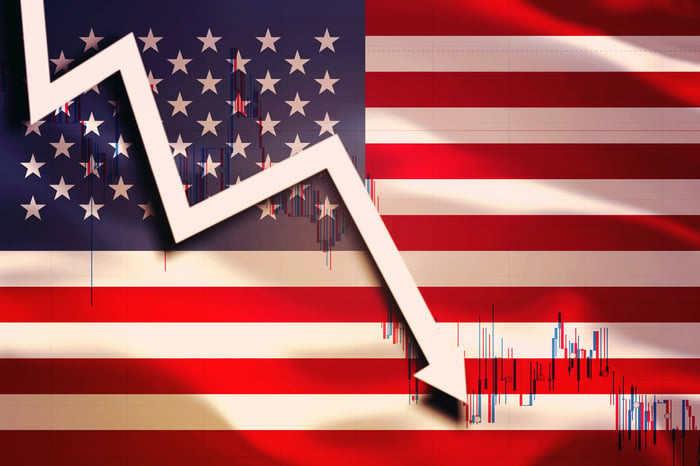 In between, the likes of Ford and General Motors joined hands with several companies to assist the government and the healthcare sector, in particular, battle the COVID-19 pandemic. Ford, for example, committed to convert an idled factory to manufacture 50,000 ventilators in collaboration with General Electric (GE 0.64%). General Motors formed a joint venture with Ventec Life Systems and delivered its first ventilators to hospitals in Chicago in mid-April.

Interestingly, the Federal reserve adjusted the April IPI to accommodate these unusual production changes: it counted any ventilators produced at idled motor vehicle parts factories under the index for electromedical and electrotherapeutic apparatus.

How oil and gas and other markets fared

Digging deeper into the IPI reveals how every major market group and industry suffered a blow in April. Some individual index declines worth noting are:

The mining sector painted an interesting picture of its own, with crude oil extraction and oil and gas well drilling posting the biggest declines in production. Blame demand and prices of oil, both of which fell off the cliff in April.  The International Energy Agency forecast oil demand to plummet a record 29 million barrel per day in the month of April!

Energy companies have been left with no option but to stop production, slash capital spending, and even announce steep dividend cuts to preserve cash.

Undeniably, utilities stood out in April, with output declining a meager 0.9%. Higher electricity sales to homes offset much of the decline in consumption from shut offices and factories even as cold weather kept demand for natural gas up and running.

In fact, major utilities are barely feeling the pinch of COVID-19. Dominion Energy (D -1.80%), for instance, not only reported first-quarter operating earnings growth of 6.6% but expects to earn $0.75-$0.85 in operating earnings per share in the second quarter versus $0.77 in Q2 2019. Dominion even reaffirmed its full-year guidance at a time when nearly every manufacturing company has withdrawn its own!

Auto makers are restarting factories, construction has resumed in parts of the country, and even truck freight demand is showing signs of life. Yet, it'll be an uphill task as every industry will have to adapt to a new normal as they work through sporadic shifts production schedules as long as coronavirus stays.

The energy sector will have to fight a tougher battle given the volatility in oil prices and oversupply concerns. ConocoPhillips (COP -3.57%) recently gave investors a glimpse of what to expect when it announced additional production cuts beginning May on top of drilling curtailments announced earlier. It also suspended its share repurchase program and slashed capital expenditure budget sharply for 2020. As the largest oil and gas exploration and production company in the U.S., ConocoPhillips' views and actions merit attention.

If there's one sector that could continue to outperform, its utilities. April IPI numbers, in fact, proved yet again why utility stocks are considered to be no-brainer defensive, low-risk stocks.