Please ensure Javascript is enabled for purposes of website accessibility
Log In Help Join The Motley Fool
Free Article Join Over 1 Million Premium Members And Get More In-Depth Stock Guidance and Research
By Harsh Chauhan – May 17, 2020 at 12:33PM

Product development moves from its smaller rival could give Intel more problems.

Intel's (INTC -2.31%) fiscal 2020 first-quarter results were a tad disappointing as the chip giant withdrew its full-year guidance on account of the uncertainty caused by the novel coronavirus pandemic.

Though the company managed to turn in impressive numbers for the quarter, delivering 23% annual revenue growth and a 63% increase in adjusted earnings per share (EPS), the second-quarter earnings guidance fell short of expectations. Intel's guidance points toward a 12% increase in revenue and a 4% improvement in EPS, which pales in comparison to the prior quarter.

This sharp drop-off means Intel may not be able to sustain its coronavirus-driven momentum. One of the reasons why that may be the case is the fact the company continues to lag rival Advanced Micro Devices (AMD -1.22%) on the technology curve. 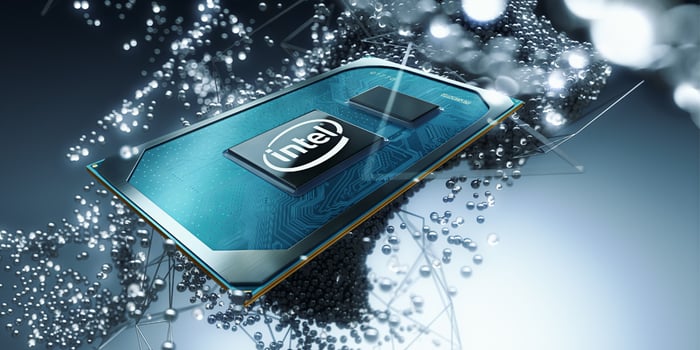 Intel gets a shot in the arm, but AMD is prepared

A closer look at Intel's performance and the second-quarter guidance indicates that it is doing well in these uncertain times thanks to a jump in demand for telecommuting and online education. As social distancing measures have kept people confined to their homes, demand for computers and data center products has risen.

Market research firm NPD Group pointed out in March that laptop and notebook sales were surging as people took to working from home. This gave Intel's client computing group (CCG) a shot in the arm with revenue up 14% annually to $9.8 billion. The company attributes this jump to an increase in model sales and strength in the notebook market. Intel CFO George Davis added on the earnings call:

PC unit volumes were up 13% year-over-year on higher notebook demand and increased supply. Notebook demand strength is expected to continue into Q2 with more people working and learning from home due to COVID-19 related shelter-in-place orders.

At first, Intel seems well-positioned to take advantage of the tailwinds in the PC space, as it is all set to launch its Tiger Lake laptop processor by the middle of the year. The company points out that laptop OEMs (original equipment manufacturers) have 50 Tiger Lake-based notebook designs ready for launch during the holiday season.

Tiger Lake is Intel's second-generation 10-nanometer chip after Ice Lake. It was originally announced in January this year, but rival AMD stole Intel's thunder by announcing its Ryzen 4000 laptop chips -- based on a 7-nanometer manufacturing process -- at the same time. AMD said in January that more than 100 devices based on the Ryzen 4000 are set to hit the market in 2020.

Ryzen 4000-based notebooks and laptops are already on the market, and AMD promises that more devices are on the way. This gives AMD a leg up over its larger rival, as the former will already have a range of devices on offer before Intel's Tiger Lake products arrive.

This means that if Intel is able to stick to its roadmap, it will have 7-nanometer chips for sale in 2022. But AMD would have moved up another level to a 5-nanometer manufacturing process. Intel's 5-nanometer transition will reportedly happen only in 2023, assuming everything goes according to plan.

This isn't good news for Intel, which has been losing CPU (central processing unit) market share to its smaller rival thanks to AMD's gains on the technology curve. AMD's foundry partner TSMC is reportedly working on an advanced 5-nanometer process node that could go into production next year.

AMD recently claimed that it has gained CPU market share for 10 consecutive quarters now, and it could eat further into Intel's share thanks to the advancements it is making on the technology front.