Please ensure Javascript is enabled for purposes of website accessibility
Log In Help Join The Motley Fool
Free Article Join Over 1 Million Premium Members And Get More In-Depth Stock Guidance and Research
By Maurie Backman – May 19, 2020 at 9:18AM

Those who were earning the least before the COVID-19 outbreak have been more susceptible to layoffs than higher earners.

In April, U.S. unemployment levels reached an ugly milestone. The rate of unemployed workers hit 14.7%, which is the highest level on record since the Great Depression. But initial data from March and early April shows that lower-income households are the ones who have been hurt the most in the course of the recent downturn. 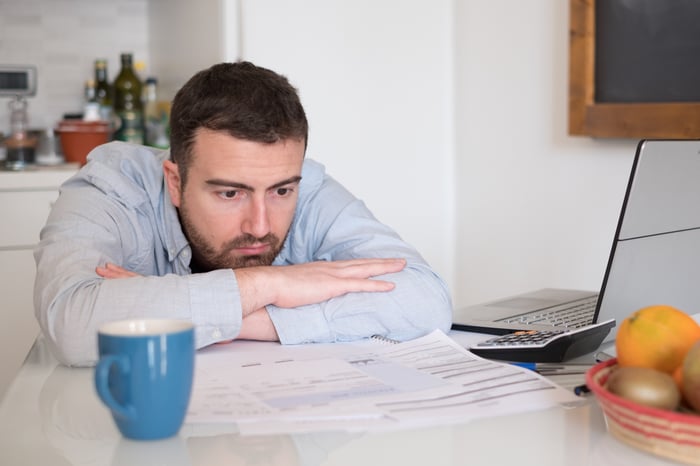 Meanwhile, workers in the leisure and hospitality industry saw the highest number of layoffs. That's an industry that tends to not pay well to begin with, which explains the aforementioned numbers.

How are workers faring on unemployment?

Those who have lost their jobs in the past number of weeks through no fault of their own can generally apply for unemployment benefits (there are also minimum income requirements to fulfill that vary by state). Those benefits often amount to less than half of workers' former income. But thanks to the COVID-19 relief package passed in late March, workers on unemployment are now entitled to an additional $600 a week on top of the benefit they'd otherwise qualify for. As such, it stands to reason that some lower-income households with a member out of work may actually be faring reasonably well right about now. In fact, 64% of those who lost jobs or saw their hours reduced expected to be able to pay their bills in full during April.

Still, that means that 36% of laid-off workers are still struggling. And oddly enough, it may be higher earners that are having the hardest time. Lower earners may actually be earning more money right now than usual thanks to the aforementioned $600 weekly boost in unemployment. But unemployment benefits max out at a certain level that may put higher earners at a disadvantage from an income replacement standpoint. Take New York, for example, where weekly benefits max out at $504. Even if we add in $600 a week, that's a total of $1,104. For someone earning over $100,000, that's not going to cut it.

Of course, laid-off Americans also have the option of tapping their savings to get by until they're employed again. But many workers don't have access to an emergency fund. In fact, as of last year, an estimated 39% of U.S. adults didn't have enough cash reserves to cover an unplanned $400 expense.

Clearly, laid-off workers at all income levels may be struggling right now. Those who can't cover the bills between unemployment benefits and savings should reach out and ask for assistance, as there's lots to be had. Many mortgage lenders are making it easy to put home loans into forbearance, while other loan servicers are being increasingly flexible with payment terms. And a large number of utility companies and internet providers have announced that they won't be shutting off service due to a lack of payment. Rather, they'll work with customers to get through this difficult period, which is good news for anyone who's having a hard time right now.