Please ensure Javascript is enabled for purposes of website accessibility
Log In Help Join The Motley Fool
Free Article Join Over 1 Million Premium Members And Get More In-Depth Stock Guidance and Research
By Adam Levy – May 20, 2020 at 10:24AM

Comcast will lose hundreds of thousands of subscribers this year.

The head of Comcast's (CMCSA -3.62%) cable segment, Dave Watson, faces a tough challenge this year. The company was already forecasting an increase in video subscriber losses for 2020, then the novel coronavirus came to town. The impact of COVID-19 is likely to accelerate cord-cutting this year as content starts to dry up without sports or new productions and many consumers face economic hardships.

Roku (ROKU -0.67%) -- the U.S. leader in connected TV devices -- has previously compared itself to Comcast and other pay-TV distributors. But its average revenue per user and gross profits are far lower than even Comcast's lowest-priced skinny bundles. And Comcast still has a long way to go before it's even close to monetizing Flex on the same level as Roku, let alone the low end of its live TV packages. 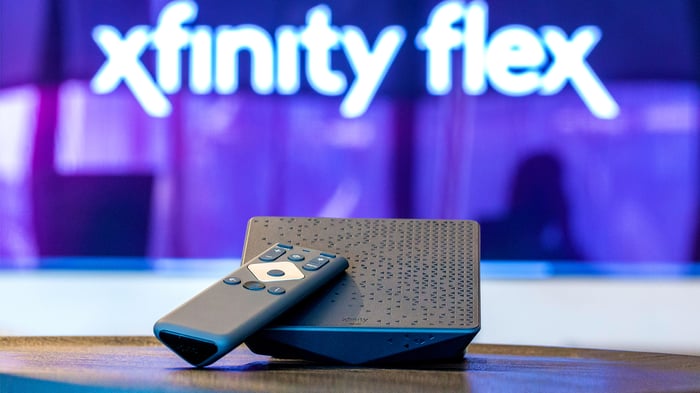 Unlike Roku's players, Comcast's Flex isn't really a stand-alone product. At least, it's not yet. It's only available to Comcast's broadband-only subscribers. Customers that subscribe to video aren't eligible.

"The main strategy I mentioned earlier is around broadband," Watson said. "It's broadband churn improvement. It's consideration in the first place."

Flex is a relatively low-cost way to acquire and retain broadband customers. The recent addition of Peacock at no extra charge per month is an added selling point for choosing Comcast's broadband service over competitors' like AT&T (T -1.22%), which has aggressively built out a fiber network.

Watson sees potential in Roku's business model. Roku generates its revenue through advertisements and taking commissions on subscription sign-ups through its devices. With its 40 million-plus accounts, it's set to generate around $1 billion in high-margin revenue from its platform this year.

Comcast generated over $22 billion from its video subscribers last year. It averaged about 21.5 million video subscribers throughout the year, so its average revenue per subscriber was over $1,000 per year. That's just a bit higher than Roku's $24 per user over the trailing 12 months.

But Flex is less about replacing lost revenue than it is about the potential to replace lost profit. And it may be that many of the Comcast customers cutting the cord aren't very profitable to begin with.

Comcast is adopting a similar philosophy to AT&T. It's going to let unprofitable and low-profit customers go, and focus on premium subscribers. "We're going to not necessarily be as focused on skinny video packaging," Watson said. "We're going to go after great customers that take X1." X1 is Comcast's premium video service, and it comes with a premium price.

The improving ARPU and margins suggest the customers leaving Comcast aren't particularly profitable. For now, most of that revenue and profit are lost, but if Comcast is able to monetize Flex users on the same level as Roku, it might be able to recoup the lost marginal profit.

That said, Comcast won't have a captive customer like it does with its premium video subscribers. It's a lot easier to switch to a competing connected-TV platform than it is to switch video service providers. And with significant competing interests with many streaming services and media companies, Comcast may have a hard time negotiating distribution and ad inventory shares due to conflicts of interest. That could hold it back from monetizing its user base at the level of Roku and fully offsetting the subscriber losses from its video business.