Please ensure Javascript is enabled for purposes of website accessibility
Log In Help Join The Motley Fool
Free Article Join Over 1 Million Premium Members And Get More In-Depth Stock Guidance and Research
By Jim Halley – May 20, 2020 at 7:29AM

With climbing revenue and lowered losses, this company may be a cannabis survivor.

Green Thumb Industries (GTBIF -0.48%) is making a strong bid to become one of the survivors in the fast-growing but unstable marijuana industry.

On Thursday, the 6-year-old company announced first-quarter numbers, and they were good enough to boost the stock's price Thursday and Friday. As of Friday, the company's stock was up 66% over the past month. 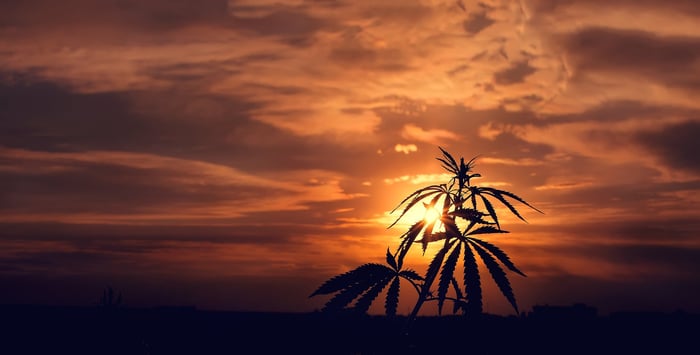 Are those net profits we see on the horizon?

Like most budding marijuana companies, Green Thumb is still losing money -- $4.2 million for the quarter -- but its growth is what made everyone notice.

Green Thumb's first-quarter revenue was $102.6 million, compared with $27.9 million in the same quarter last year, and it trimmed net losses by $9.9 million compared with the fourth quarter.

"We believe that our operational strength and resilience, supported by a strong balance sheet, continue to differentiate and position us for long-term success, especially during these challenging times," Green Thumb CEO Ben Kovler said in a company release.

The Illinois-based cannabis company has 44 retail outlets spread across 12 states with licenses for 96 stores, and it appears to be growing, while others in the industry have faltered in recent months. On Wednesday, it opened its fourth store in Nevada.

A lot of Green Thumb's revenue came from its branded products, which are sold at 700 stores nationwide -- not just the Rise and Essence retail locations owned by Green Thumb. Gross sales of those branded products grew by roughly 21% over the previous quarter, helped by expanded distribution. Green Thumb even added its first e-commerce site, where it sells clothing and accessories under its Dogwalkers brand.

"If you can brand water, you can certainly brand cannabis," the company's chief strategy officer, Jennifer Dooley, said on a recent podcast. "How do we want to do that? We think about a family of brands."

Green Thumb's home state of Illinois just completed its first full quarter of recreational sales. Through the first four months of the year, the state had $147.5 million in industrywide sales. Adult-use cannabis sales in April alone were $37.2 million, according to the state. Green Thumb, with seven stores in Illinois, stands to benefit by taking a big slice of what is looking to be a $450-million-a-year market, at minimum. The company's biggest market to date is Pennsylvania, where it has 10 stores. A lot of the company's growth is new. In the 2019 fiscal year, it entered five new markets: California, Colorado, Connecticut, New Jersey, and New York.

The company has adjusted well to the impact of COVID-19 on various state regulations. In late March, Nevada began to require adult marijuana dispensaries to operate as delivery-only; Green Thumb quickly adapted, and now that the state has allowed curbside service, Green Thumb is doing that as well.

"We have expanded our service model to include curbside pickup, and we have bolstered our delivery infrastructure in Nevada so that we can continue to serve the community with much-needed access to quality cannabis," Kovler said. "Our team has continued to show incredible resolve and commitment through the ongoing COVID-19 crisis."

Can Green Thumb hold its ground?

Since last year, shares of many marijuana companies have fallen off a cliff. The companies that are likely to survive the pandemic are the ones that have enough cash to get through any short-term headwinds. Count Green Thumb in that category. It's the fourth-largest marijuana company in terms of market cap. It has roughly $71 million in cash compared with $93 million in long-term debt. At the rate it is building revenue, that's a decent position to be in.