Please ensure Javascript is enabled for purposes of website accessibility
Log In Help Join The Motley Fool
Free Article Join Over 1 Million Premium Members And Get More In-Depth Stock Guidance and Research
By John Ballard - Updated May 21, 2020 at 4:10PM

Countless numbers of people use these brands every day, but which stock should you buy?

Apple (AAPL 0.88%) and Netflix (NFLX -1.85%) impact the daily routine of millions of people worldwide. Apple has more than 1.5 billion active users across its iDevices, while Netflix boasts a fast-growing member base of 182.86 million.

While both companies face some headwinds in the near term due to the coronavirus economy, both are in a good position to get through 2020 and continue growing over the long term. Let's see which stock is the better buy today. 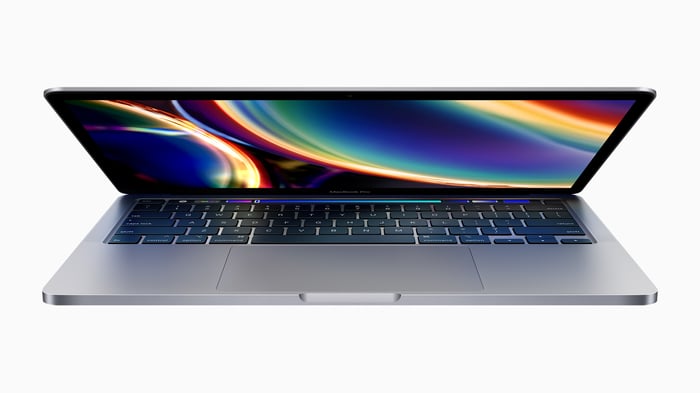 The near-term economic picture is looking very bleak. More than 20 million people lost their jobs in April alone, which will lead to lower consumer spending. But Apple and Neflix will be fine due to strong underlying business operations.

Apple has more than $83 billion in net cash. That is plenty of cash to invest for growth and maintain its dividend to shareholders, which recently increased by 6% to a quarterly payout of $0.82 per share.

Netflix doesn't have the cash-rich balance sheet like Apple. As of the most recent quarter, Netflix carried $14.7 billion of debt with only $5.15 billion in cash on its balance sheet. But Netflix can get away with this because it makes money from monthly subscriptions that provide a recurring revenue stream to pay expenses and invest in new content.

Apple is seeing strong demand in some areas but weakness in others. The main headwind in the near term is weak demand for iPhones. The iPhone comprises half of Apple's revenue. During its fiscal second-quarter conference call, management warned that sales of iPhones and wearables (e.g., Apple Watch) would worsen through June, but management didn't provide specific guidance for sales or earnings.

However, Apple is seeing strong demand for services, specifically Apple TV+, Apple Arcade, Apple News+, and Apple Card. While these services continue to add users, Apple reported during its conference call that its Apple Care warranty program and advertising business in the App Store has been negatively impacted by the coronavirus.

Overall, the services business, which is Apple's fastest-growing revenue stream and represented 23% of total revenue last quarter, should continue to perform well.

Apple also expects sales of iPads and Macs to improve through June. CEO Tim Cook attributed this to more people working at home and needing some extra tools to remain productive.

For what it's worth, Wall Street analysts currently expect Apple to grow sales by 1% in fiscal 2020 (which ends in September). Analysts expect earnings per share to increase 3.6% year over year. But in fiscal 2021, revenue growth is expected to accelerate to 12.5%, likely reflecting a strong upgrade cycle for the next iPhone, which is expected to feature 5G wireless connection capability.

Netflix is experiencing some disruption from the novel coronavirus. Filming has stopped globally, and Netflix hasn't been able to get voice dubbing completed for some foreign releases. The good news is that Netflix has already completed filming for several projects scheduled for release this year and through 2021.

Although this isn't the ideal situation, Netflix is thriving in this environment. The company added 15.77 million new subscribers in the first quarter, which blew away expectations. However, management cautioned that this growth is probably coming from those who were likely going to subscribe in the next quarter anyway, which may limit growth in the next few quarters.

Although revenue jumped 27.6% year over year in the last quarter, management expects viewing to decline and membership growth to decelerate once people return to their normal social life.

The biggest takeaway from the first quarter is the tremendous value consumers are finding in the vast content library, which points to growing brand value.

Analysts currently expect Netflix to grow revenue by 22.9% year over year in 2020, while earnings are expected to increase by 56% to reach $6.46. 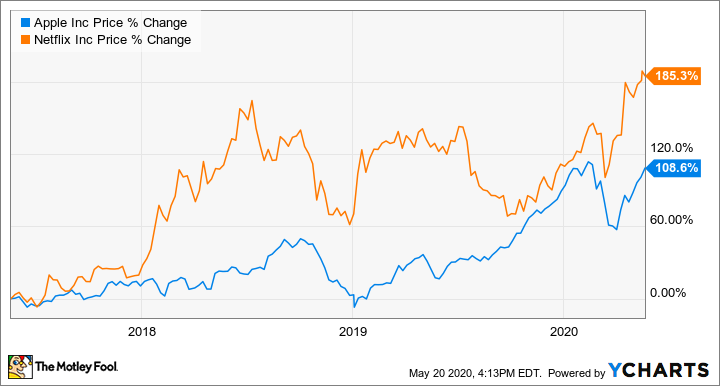 I wouldn't be afraid of holding either of these FAANG stocks right now. But if I were choosing only one to buy today, I would invest in the company that is growing faster, and that is Netflix.

Sales of the iPhone have hit a saturation point, which is why Apple has only grown its revenue by a total of 20% over the last three years. But Netflix is still growing its revenue at more than 20%, which reflects the advantage the streaming provider has growing off a smaller revenue base compared to Apple. Apple generated $268 billion in revenue over the last four quarters, compared to $21.4 billion at Netflix.

Dividend investors will like Apple for its $60 billion of annual free cash flow and regular quarterly dividend. But Netflix offers more growth. The streaming giant is beginning to work toward sustained profitability, which is why analysts expect Netflix to increase its earnings by 56% this year.

Netflix stock sports a high forward P/E of 70, so it will have to continue posting high growth rates in revenue and earnings to justify this valuation level, but it should be up to the task. Netflix has a long growth runway, particularly across international markets. Its brand awareness overseas is still relatively low for what Americans consider a must-have subscription for home entertainment. Growth overseas will be important for Netflix in the near term, given that there could be limited pricing power to pad revenue growth in the U.S. with so many competitors emerging.

Investors who like dividends and have lower risk tolerance for high P/E stocks may favor Apple. But if I were making the choice today, I would invest in the stock with the higher headroom to increase in value. Netflix is continuing to post substantial growth rates on the top line, while its potential to expand overseas still leaves tremendous gains for the stock over the long term. Therefore, I would rather buy Netflix at today's price levels.