Please ensure Javascript is enabled for purposes of website accessibility
Log In Help Join The Motley Fool
Free Article Join Over 1 Million Premium Members And Get More In-Depth Stock Guidance and Research
By Billy Duberstein – May 24, 2020 at 9:27AM

All in the span of less than 10 years!

However, you don't have to be a well-connected venture investor in private markets to make these types of stunning returns. In fact, some well-placed bets on certain technology growth companies can also lead to mouthwatering returns, right there in the public markets.

The following three companies have each demonstrated that "secret sauce," allowing each to generate tenfold returns in less than 10 years, turning a potential $10,000 investment at their respective IPOs into $100,000 or more. Here's how they did it, and how you can use their examples to find the next blockbuster investment. 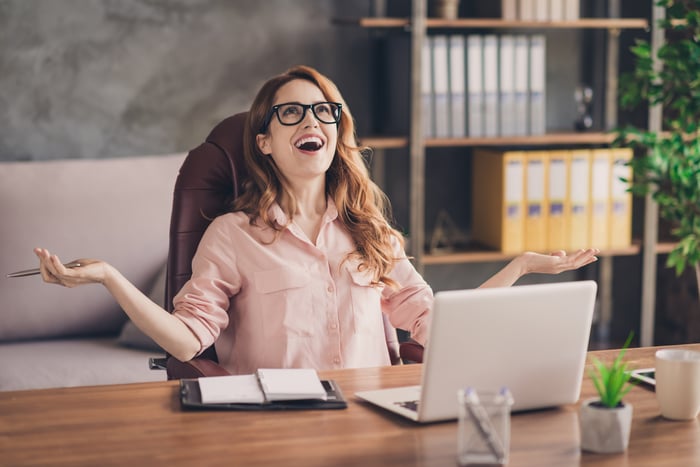 These stocks have gone up 10 times their IPO price. Image source: Getty Images.

Networking equipment manufacturer Ubiquiti (UI -4.53%) first went public back in 2011 at $15 per share. Today? The stock trade near a whopping $180 per share, and holding up just fine against the backdrop of the coronavirus, thank you very much.

What did Ubiquiti do to earn such high-powered gains? Under CEO Robert Pera, Ubiquiti identified an undeserved market that was extremely large -- rural areas in the developed world and developing world that didn't have access to speedy broadband. Typically requiring digging trenches and laying coaxial or fiber-optic cable, high-speed broadband just wasn't available to a large swatch of the globe.

Ubiquiti then solved the problem by developing high-powered radios that could beam internet at quick speeds over unlicensed spectrum. But in order to make the radios affordable, Ubiquiti had to make its business model fit the product so that it could make these radios and still remain profitable. Pera & Co. did just that, spending almost nothing on marketing and advertising, or high touch after-sales service -- a move almost no other hardware business makes. Instead, Ubiquiti bet on independent internet providers all over the globe discovering its affordable yet powerful radios, then offered these customers a centralized forum where they could help each other out with service and support, building a cult-like following.

That decentralized, low-touch solution worked, with providers all over the world buying in to the Ubiquiti hardware ecosystem. Ubiquiti then took the same business model and set its sites on enterprise hardware, including access points, switches, and routers. That territory had traditionally been dominated by high-end enterprise solutions such as Cisco (CSCO -3.13%). However, Ubiquiti took a new approach, stripping out all the extra bells and whistles that most small and medium businesses don't really need, and once again selling without any marketing on high-touch service that other vendors have traditionally required.

That unique business model worked like a charm in enterprise as well, leading Ubiquiti to dominate the price-sensitive tiers of the business hardware market. Today, the newer enterprise segment is even larger than the traditional service provider radio business, making up 68.5% of last quarter's revenues.

By identifying underserved markets that couldn't afford expensive solutions, then tailoring its business model to serve and dominate those niches before others could get started, Ubiquiti went on to deliver more than 10x returns for IPO investors in just nine years.

If enterprise networking equipment was disrupted by Ubiquiti, then the enterprise database market -- which has very similar dynamics -- is now potentially being disrupted by MongoDB (MDB -5.34%). MongoDB's founders, who had also founded Doubleclick, the ad-tech firm later acquired by Alphabet (GOOG -2.59%) (GOOGL -2.68%), had become frustrated by traditional enterprise databases. Leading enterprise relational databases adhered to a somewhat rigid row-and-column format that, while very efficient for traditional transactions, was ill-suited for today's vast and diverse unstructured data sources.

MongoDB's founders solved the problem by inventing the document database, which structured data in a totally different way, allowing one data source to reference several others at once, not just one. Obviously, it's difficult to change entrenched enterprise practices right from the start, so MongoDB began offering a "freemium" model, allowing developers to begin working with MongoDB's database before actually purchasing it for more intensive use cases. That worked in getting developers on board, who might have otherwise had to buy expensive high-end offerings from incumbents like Oracle (ORCL -3.69%).

After experiencing the benefits of MongoDB's flexibility and functionality, the new offering caught on, and MongoDB management plowed revenue back into R&D, making the database more and more secure. Newer features included Atlas, which is MongoDB-as-a-service delivered via the cloud, and is currently seeing extreme uptake, and adding enterprise-grade features such as ACID compliance and other features that eventually warmed larger enterprises to trust and use MongoDB's new format more and more. Oh, and inking a partnership with leading enterprise IT consultant IBM (IBM -3.04%) didn't hurt either.

MongoDB's leadership position in this new type of disruptive solution has allowed it to become the vendor of choice for document databases, so much so that even a copycat version from Amazon (AMZN -4.92%) hasn't managed to stifle MongoDB's growth.

Since going public at just $24 per share in 2017, MongoDB's share price has skyrocketed to a whopping $220 per share. Okay, so it's not quite a 10x return -- It's only 9.2. But hey, since MongoDB has only been public for two and a half years, I think we can round up!

Canadian e-commerce software vendor Shopify (SHOP -9.63%) has been a huge winner ever since going public in May of 2015. Exactly five years later, and Shopify's stock has gone up an astounding 48.5 times its IPO price to a lofty $825 per share.

Shopify's insane rise can also be attributed to solving a big problem in a very big, under-served market -- e-commerce. It's not secret that e-commerce has been growing as a percentage of overall retail sales for small, medium, and large-sized companies alike. However, managing unified e-commerce operations across the web, mobile, social media, and other formats is a daunting, complex task. And sure, you could just list on Amazon.com (AMZN -4.92%). However, listing with the e-commerce behemoth has its drawbacks. First, you can't necessarily control how your brand looks, or differentiate it among Amazon's vast inventory of other brands. Second, if you're successful, Amazon could begin selling its own private-label version of your product at some point.

Shopify's platform takes out all of that complexity and makes it easy for any brand to create its own online store, across any format. Shopify's easy-to-use interface allows for the creation of stores, but Shopify has also expanded its suite of products to make an all-encompassing solution including payment processing, shipping and fulfillment, working capital financing, and web marketing. Shopify's product is fully scalable, all without the customer having to manage any hardware or software internally.

Importantly, Shopify's tiered offering means that it has been able to attract a wide swath of companies ranging from young start-ups to international giants such as Nestle (NSRGY -0.61%).  The diverse lineup has allowed Shopify to collect vast troves of data from its customers, which helps improve its product, lending operations, and marketing.

Like the other companies mentioned above, Shopify identified a problem -- how to enable and simplify e-commerce for companies and brands, while allowing customers to retain brand ownership and control  -- then built its product to suit that market. Shopify has also been relentless on improving its products and developing new ones, staying ahead of any would-be competitors. That strategy has clearly caught on with both customers and investors alike.

What do all three have in common?

Ubiquiti, MongoDB, and Shopify all have done a few common things right in order to generate these massive shareholder returns. Their management teams identified an under-served market or need that wasn't being met by current solutions. All three companies then built quality products to solve these problems -- Ubiquiti in connectivity, MongoDB in databases, and Shopify in e-commerce -- which opened up these entire massive end markets to each company's disruptive solution.

When looking for the next 10-bagger in the market, ask yourself, does the company solve a problem for customers, is it a leader in delivering that solution, and does the solution serve a massive end-market? If the answer to all three questions is "yes," then you may have a very, very profitable investment opportunity on your hands.