Please ensure Javascript is enabled for purposes of website accessibility
Log In Help Join The Motley Fool
Free Article Join Over 1 Million Premium Members And Get More In-Depth Stock Guidance and Research
By Jason Hall – May 24, 2020 at 6:05AM

The work-from-home movement and growth of ridesharing have implications for the Blue Oval's future.

The coronavirus pandemic has crashed the global economy, with companies involved in transportation hit the hardest. Ford (F -3.60%) has certainly not proved immune, having shut down much of its production during the early days of the spread of the disease, under both government-required closures, and the reality that auto sales were set to plummet as more people lost their jobs.

Fast-forward to today, and 27.5 million Americans are unemployed, millions more are dealing with reduced hours, and even more "gig economy" workers classified as contractors and not employees are also out of work. That's a lot of people not likely to buy a new car anytime soon.

Ford responded quickly to bolster its balance sheet at the outset of the pandemic, borrowing an extra $15 billion and suspending the dividend in late March. With signs that some parts of the economy are opening up (including some of Ford's plants) and strong demand for its most-profitable vehicles, it's looking likely that the company will indeed come through the worst of the crisis and emerge, if not stronger, than strong enough to profit from the eventual economic recovery once we beat COVID-19.

So let's take a look a little further into the future? What might Ford look like in five years? More importantly, what would that mean for investors who own -- or buy -- Ford shares today?

Built to withstand the bad times

Needless to say, when Ford management made the decision a number of years back to maintain a massive amount of cash on the balance sheet, they weren't foreseeing anything like the coronavirus pandemic. In 2016, Ford's then-CFO said the company wanted its balance sheet to be strong enough to support the dividend through anything but the worst recession.

Ford lost $2 billion in the first quarter, and could lose more than $5 billion in the second quarter, but it ended Q1 with $46 billion in cash and equivalents, while the dividend suspension will cut cash spending by $2.4 billion annualized. As a result, the company will have more than sufficient cash to get to the end of 2020 under current conditions. 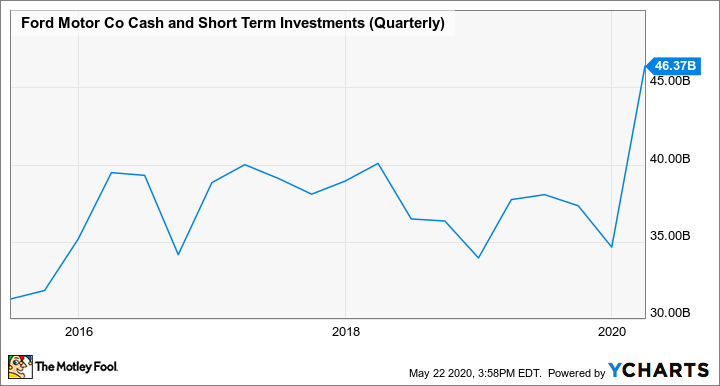 Even as demand for other passenger vehicles has remained weak, surging demand for pickups and SUVs is great news for the company. Ford has already restarted some North American factories, hiring additional workers to account for increased absenteeism resulting from enhanced safety practices.

The company's plants in China have been reopened for weeks now. Now is the time for Ford to transition from almost zero revenue to generating cash flows from these operations. It won't come close to being enough to offset all of its cash burn from fixed expenses like paying interest on its debt, but it's a start toward what will hopefully be a steady increase in sales as things return to some semblance of normal.

The coronavirus lockdown has allowed plenty of companies to realize the potential benefits of remote work, and several big tech companies have already said they plan to allow more employees to work remotely in the future. Not only could this cut expenses for employers, but it could also increase the pool of potential employees to include people who have the skills, but are not interested in relocating.

It could also prove a boon for workers who could save money by eliminating the daily commute, allowing them the freedom to live virtually anywhere. It could also further juice the prospects for ridesharing and autonomous vehicles; less need for a daily commuter vehicle could mean more people forego car ownership entirely. That's created uncertainty for Ford and other automakers. 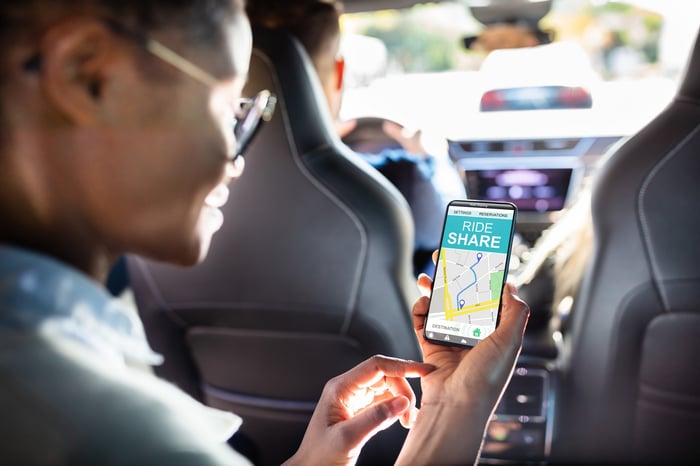 This is where I think a healthy dose of reality is important. The fact is, remote work isn't a new concept; other companies, notably Yahoo! a number of years ago, have given remote work a shot in the past, with mixed results. Sure, the proliferation of new tools will make working from home -- or a neighborhood coffee shop -- easier and more productive. But count me among those who don't expect we will look back at the coronavirus pandemic as being the birthplace of some mass remote work movement. Most people simply aren't wired to work in essentially isolation, and long-term, human nature trumps technology. Not to mention that far fewer jobs are conducive to this kind of work than I expect most people realize.

My expectation is that where Ford and other automakers will be impacted from technology is via the growth of autonomous driving and more wide-scale car sharing. The implications for individual car ownership are far larger than work-from-home.

Five years ahead, Ford will be a leader

Expectations aside, global transportation is going only grow in the future, and Ford is investing where the demand will be. Between developing rideshare and autonomous platforms, Ford is taking steps to make sure it participates in this part of the future of automobiles. The company is also likely to be a leader in auto electrification and other alternative energy drivetrains as more car buyers look to move away from fossil fuels.

I also expect that management will continue to prioritize a fortress-like balance sheet. It may not have planned for the first global pandemic in over a century, but it will prove the difference in the company emerging on the other side with the financial flexibility to continue investing in the future of automobiles. I also expect that enough time will have passed for the company to have once again started paying a solid dividend that's sustainable through all but the worst economic downturns.