Please ensure Javascript is enabled for purposes of website accessibility
Log In Help Join The Motley Fool
Free Article Join Over 1 Million Premium Members And Get More In-Depth Stock Guidance and Research
By Lou Whiteman – May 26, 2020 at 11:01AM

Airlines are getting a lift from the broader market optimism that life is getting back to normal.

Airline stocks are rocketing higher on Tuesday morning, joining in a broader market rally as investors celebrate signs economic activity is returning to normal and promising developments in the race for the COVID-19 vaccine.

Airlines have been hit hard by the COVID-19 pandemic, with global travel demand reduced to nearly zero. The carriers have responded by slashing schedules, grounding planes, and cutting costs, with many major airlines flying only about 5% of their original schedules in May.

The cost cuts, coupled with government assistance as part of the CARES Act stimulus plan and private fundraising efforts, have bought the airlines time. But no airline can survive indefinitely with little revenue coming in, and the sector is going to need to see travel start to normalize in the months to come to avoid liquidity issues. 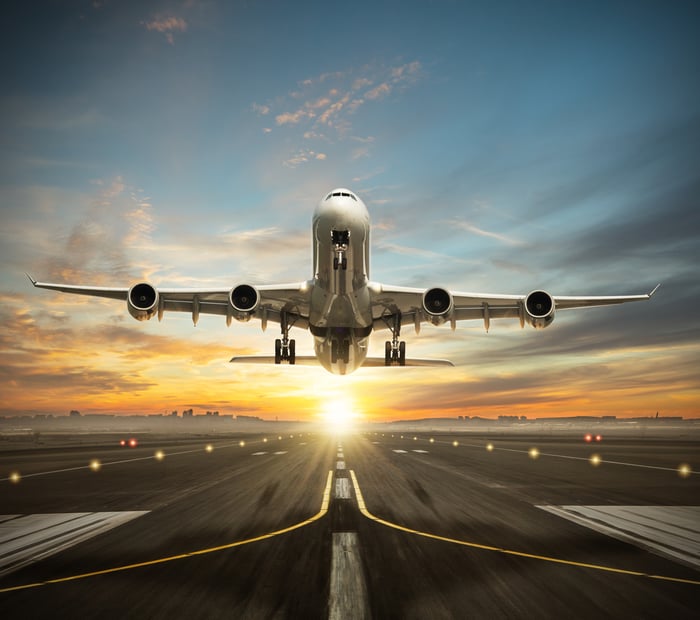 Investors saw signs of normalization over the Memorial Day weekend in the U.S., with crowds flocking to beaches and other traditional vacation sites. The pandemic is far from over, and in fact it is possible all that travel could lead to a spike in future cases, but there was also good news regarding the development of COVID treatments and vaccines from Merck and Novavax.

Airline investors have other green shoots to encourage them. German carrier Lufthansa is nearing an assistance package that should help it fly through the crisis, which is an incremental positive for its U.S. partner, United. And Southwest was upgraded at UBS from neutral to buy, with analyst Myles Walton saying the path for a domestic recovery is becoming more clear.

Most of these airline stocks lost more than half of their value in the early days of the pandemic, with investors fearful the sector was facing a wave of bankruptcies. Globally we have seen airlines go bankrupt, including two of the largest airlines in South America, but the U.S. industry entered the downturn in better financial shape than most and so far has managed through the crisis well.

For investors, it is pretty straightforward from here: If demand does return to even more normal recessionary levels, the stocks are undervalued and have a lot of potential to shoot higher. If demand does not return, bankruptcy remains a possibility and equity holders could end up wiped out completely.

On Tuesday, the optimists are in charge, but investors should be warned there is still plenty of risk and uncertainty with the airlines right now. I'm more hopeful than most that the entire U.S. sector can fly through this crisis without failures, but given the uncertainty, I'd recommend sticking to top names if you're thinking about buying in right now.