In case you haven't noticed, biotech is a pretty hot area for investors right now. While the broader market indexes are still down year to date despite strong rebounds in recent weeks, the major biotech exchange-traded funds (ETFs) are in solid positive territory for the year.

Granted, not all biotech stocks are doing well. But even some of the current laggards could be tremendous winners over the next five years. If you've got $3,000 to invest, here are three great biotech stocks to buy right now that have what it takes for long-term success. 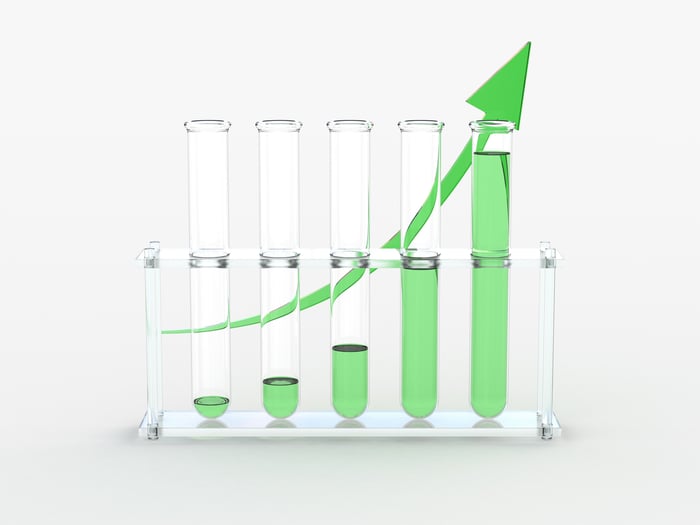 Am I exaggerating? I don't think so. The company's drugs don't have any competition in treating the underlying cause of cystic fibrosis (CF). Over the last 12 months, Vertex has secured multiple reimbursement deals that expand the market for its CF drugs. More importantly, it launched Trikafta in the U.S. with a staggeringly successful first full quarter on the market and awaits approval in Europe.

Wall Street analysts project that Vertex's CF franchise will enable the company to grow earnings by nearly 24% annually over the next five years. After that, I fully expect Vertex to rack up successes in other therapeutic categories. For example, the biotech has a candidate in phase 2 testing that targets alpha-1 antitrypsin deficiency (AATD). It's a rare genetic disease that, like CF, is caused by a protein misfolding issue, and it has a similar market size to CF.

Vertex also has other early-stage programs targeting rare genetic diseases. However, it's the company's pipeline candidates that target not-so-rare indications that could be absolutely huge. Vertex has a phase 2 program that targets the signaling of pain. It also hopes to begin phase 1 testing by early 2021 of a potential cure for type 1 diabetes.

Ionis Pharmaceuticals (NASDAQ:IONS) has been content with staying out of the limelight. It has three approved drugs, but it doesn't directly market any of them. Biogen licensed the rights to spinal muscular atrophy (SMA) drug Spinraza, while Ionis' affiliate company Akcea Therapeutics markets hereditary transthyretin-mediated amyloidosis (hATTR) drug Tegsedi and familial chylomicronemia syndrome (FCS) drug Waylivra in Europe.

These three drugs combined to drive Ionis' revenue in the first quarter of 2020 nearly 24% higher compared to the prior-year period. However, Spinraza faces the prospect of stiff competition from Roche's risdiplam, assuming the new SMA drug wins regulatory approvals. Tegsedi is up against its own strong rivals with Pfizer's Vyndaqel and Alnylam's Onpattro.

So, why is Ionis a smart pick? The company's pipeline is loaded with potential winners. Ionis has five late-stage programs and a whopping 22 programs in phase 2 testing. The most promising candidates include Huntington's disease drug tominersen (which Ionis licensed to Roche) and AKCEA-TTR-LRx, which Ionis and Akcea are evaluating in late-stage studies targeting hATTR polyneuropathy and ATTR.

Analysts think Ionis could deliver sizzling annual earnings growth of 49% over the next five years thanks in large part to its promising pipeline. The biotech's antisense technology, which focuses on destroying messenger RNA to prevent disease-causing proteins from being produced, holds the potential to address a wide range of diseases, giving Ionis a tremendous growth runway over the long term.

Axsome Therapeutics (NASDAQ:AXSM) is without question the riskiest of these three biotech stocks. It doesn't have any approved products on the market yet. Yet its market cap is still close to $3 billion, which means high expectations are already baked into the share price.

However, I think those expectations will be met and exceeded. Axsome's pipeline includes four promising drugs. Three of them are already in late-stage testing. The company plans to file for FDA approval of AXS-05 in treating major depressive disorder (MDD) and for AXS-07 in treating migraines in late 2020.

AXS-05 could potentially generate peak annual sales of around $900 million in the MDD indication. Approval for TRD would likely bump the drug into blockbuster sales territory. AXS-07 could add another $300 million annually at peak if approved for treating migraine. The potential for these two drugs alone make Axsome an intriguing proposition at its current valuation. The possibility of success for AXS-14 and AXS-12 (which is set to begin late-stage testing in treating narcolepsy later this year) makes Axsome even more attractive.