Please ensure Javascript is enabled for purposes of website accessibility
Log In Help Join The Motley Fool
Free Article Join Over 1 Million Premium Members And Get More In-Depth Stock Guidance and Research
By John Ballard – May 30, 2020 at 11:21AM

Gaming is the bread and butter of both companies, but which stock should you buy?

Activision Blizzard (ATVI 0.71%) and NVIDIA (NVDA 2.60%) are pillars of the video game industry. The former has over 400 million monthly active users across its portfolio of top gaming franchises, including Call of Duty, World of Warcraft, Overwatch, and the mobile game Candy Crush. Meanwhile, many of the millions of PC gamers are using NVIDIA's graphics cards, and the company claims to serve more than 200 million gamers with its GeForce family of graphics processing units (GPUs) and is the market share leader in the discrete GPU market.

Both stocks have been home runs for investors over the last decade, but let's compare both companies to determine which of these gaming leaders is the better buy today. 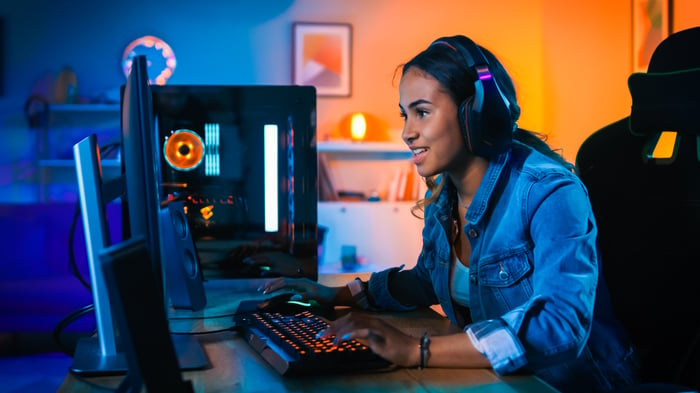 With more people at home since March, Activision Blizzard reported high engagement levels across most of its games. One of the standouts was Call of Duty. The Activision segment saw its monthly active users more than double to 102 million, driven by three releases in the franchise within the last two quarters: Call of Duty: Mobile, Call of Duty: Modern Warfare, and the free-to-play battle royale title, Call of Duty: Warzone. That last entry debuted at the perfect time with more than 60 million people downloading the game after its March 10 release just as shelter-in-place orders were going into effect.

Based on the better-than-expected start to the year, management currently expects full-year revenue to be $6.8 billion, up 5% over 2019. Non-GAAP (adjusted) earnings per share is expected to increase 16% to $2.62.

Investors have much to look forward to beyond 2020. Blizzard has its strongest content pipeline in history, including highly anticipated releases with Overwatch 2 and Diablo 4, as well as mobile versions of existing franchises.

Over the next five years, analysts expect adjusted earnings to grow at a compound rate of 11.8%. The stock trades at a forward price-to-earnings (P/E) ratio of 27 times management's 2020 earnings guidance. 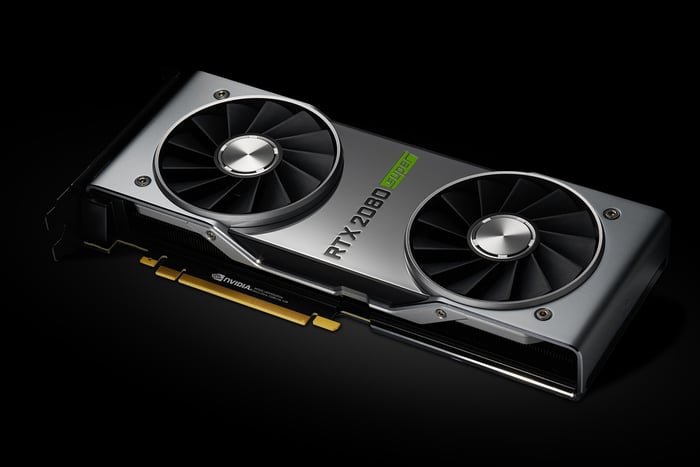 NVIDIA is enjoying strong momentum too, and it's growing a lot faster. Revenue increased by 39% year over year in the most recent quarter, driven by strong demand for products in gaming (51% of fiscal 2020 revenue) and data center (27% of fiscal 2020 revenue). Adjusted EPS increased 105% year over year as higher data center sales and GeForce GPU product mix drove margins higher.

The stay-at-home dynamic drove a more than 50% increase in hours played on the GeForce platform. NVIDIA experienced soft demand for gaming GPUs from retailers and iCafes in China due to COVID-19 but made up for that with strong demand coming from e-commerce channels. NVIDIA also supplies custom chips for the Nintendo Switch, which is seeing elevated demand due to the recent release of Animal Crossing: New Horizons.

Data center demand was off the charts with revenue soaring 80% year over year. The performance was driven by the ramp of the new A100 GPUs. The data center segment should get a boost next quarter, since NVIDIA completed the acquisition of Mellanox on April 27. Mellanox is a provider of switch systems and cable solutions for data centers, and it's growing fast with revenue up 40% year over year to $429 million. This new addition to NVIDIA's business will be immediately accretive to operating results.

NVIDIA only offers guidance one quarter out, but analysts currently expect revenue and earnings to increase 33% and 40%, respectively, in fiscal 2021 (which ends next January). Over the next five years, analysts expect EPS to climb at an annual compound rate of 13.7%.

NVIDIA is the more exciting stock -- it has been very successful expanding its core gaming technology to non-gaming applications. NVIDIA GPUs are used by every major cloud provider in the world. Companies are turning to NVIDIA technology to power recommendation engines, chatbots, and image recognition, among many other uses. Given the rising demand for high-performance chips, the data center segment is on pace to soon become NVIDIA's largest business.

Activision stock is cheaper, although it's not growing as quickly. But at a forward P/E ratio of about 27, it has a PEG ratio of 2.3 times analysts' five-year growth estimate. Investors are getting a company that has a recurring revenue stream from Blizzard's World of Warcraft, which is a subscription-based title. Slightly more than half of Activision's revenue in 2019 was derived from in-game spending, which is recurring in nature, as many players tend to stick with the same games every month. The high percentage of revenue that comes from in-game spending is beneficial in a recessionary year.

Both companies offer investors moonshot growth opportunities. For NVIDIA, that's supplying chips for autonomous vehicles (6% of total revenue), and for Activision, it could develop a sizable revenue stream from advertising and esports over the long term. But if I had to choose one to buy now, I would favor the lower valuation of Activision Blizzard over NVIDIA.