Please ensure Javascript is enabled for purposes of website accessibility
Log In Help Join The Motley Fool
Free Article Join Over 1 Million Premium Members And Get More In-Depth Stock Guidance and Research
By Daniel Miller – Jun 2, 2020 at 11:13AM

The U.S. automotive industry has been hard hit from the top down during the pandemic as manufacturers temporarily idled plants, suppliers were left with an uncertain schedule, and retailers suffered from social distancing restrictions and plunging foot traffic. But Hyundai's May U.S. sales results, released Tuesday, gave a brief glimpse into the auto industry's recovery.

Another interesting point for investors to note was that Hyundai's retail volume increased 5%, while its fleet deliveries dropped 79%. Import brands such as Hyundai rely on fleet sales for less total volume than Detroit automakers (Hyundai said fleet sales were 5% of total volume), but this category is going to be bleak for all automakers as rental companies such as Hertz, which recently filed for bankruptcy protection, and Avis  have announced they won't be buying vehicles for their fleet in 2020 due to COVID-19 and a devastating decline in airport traffic. 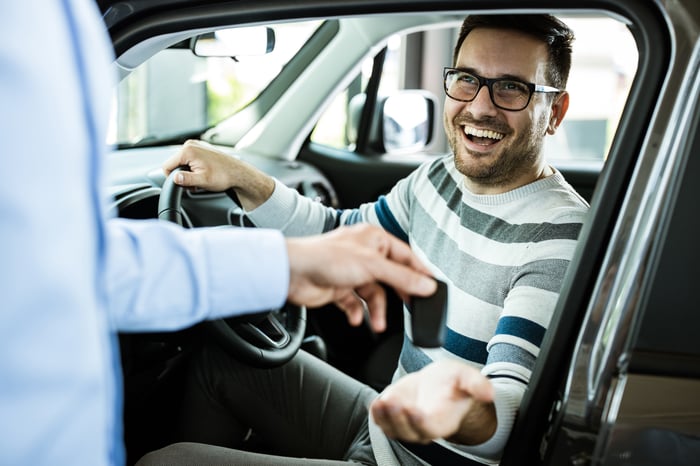 Part of the sales improvement in the broader auto industry was driven by rising incentives and deals. Analysts at ALG estimate average incentives rose to $4,526 during May, a 21% increase from the prior year's level. Hyundai's sales gains are a glimpse into the steady automotive recovery through May, but the question will be if this sales recovery continues or stagnates during summer months. We'll have much more information next month as Detroit automakers only share quarterly sales data, rather than monthly.

Report: Apple Could Work With Hyundai on Electric Vehicle

Is This New Fuel Cell Catalyst a Game Changer for Hydrogen Vehicles?