Korean auto giant Hyundai Motor (OTC:HYMTF) is about to take the wraps off of what could be a world-beating new product: an all-electric small SUV with nearly 300 miles of range.

Hyundai will provide all the details of its new Kona Electric crossover SUV at next week's Geneva Motor Show. But it has shared quite a bit in advance -- enough to see that the new Kona Electric could be tough competition for General Motors' (NYSE:GM) Chevrolet Bolt EV -- and a more practical alternative to Tesla's (NASDAQ:TSLA) swoopy Model 3 sedan.

There are still some big things we don't know yet, including this: Will Hyundai sell the Kona Electric in the United States? The Hyundai Kona Electric could be the new affordable range champ

The big point of interest is the Kona Electric's available range: up to 291 miles. That's quite a bit more than GM offers in the Bolt, and it comes close to the long-range version of the Model 3 -- for (probably) less money.

Not all Kona Electrics will have that much range, though. Hyundai said that in Europe, it will offer the Kona Electric with two different battery packs:

Note that those ranges are estimated using the new Worldwide Harmonized Light Vehicle Test Procedures (WLTP), which are more conservative than the old European Union standards and appear to be generating results very close to U.S. standards.

For instance, the Bolt is rated as having 238 miles of range under the U.S. testing standard; its European sibling, the Opel Ampera-e, which uses the same battery pack and is essentially identical, is expected to be rated with 380 kilometers of range (236 miles) under WLTP.

Why offer two different battery packs? My guess is that the smaller battery pack is intended to compete with Nissan's (OTC:NSANY) all-new 2018 Leaf. The Leaf is rated at either 168 or 177 miles of range on the WLTP test, depending on options.

The takeaway: Depending on how Hyundai prices it, the longer-range Kona Electric could be the new under-$40,000 range champion.

What else do we know about the Hyundai Kona Electric?

The Kona Electric is a sibling of the new (internal-combustion-powered) Hyundai Kona, a small crossover SUV that Hyundai is in the process of launching around the world. (It'll begin arriving at U.S. dealers this month.) It's aimed squarely at rivals like Honda's HR-V, Toyota's new C-HR, and GM's Buick Encore, among others. 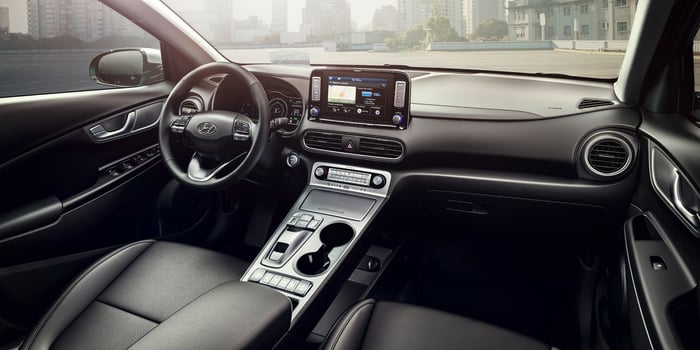 The Kona Electric's interior is exactly what you'd expect in a loaded 2018 Hyundai. That familiarity could help sales. Image source: Hyundai.

It's hard to tell without seeing it up close, but at least on paper, the Kona's interior dimensions don't suffer too much from the transition to electric. Head, leg, and shoulder dimensions in the front and rear seats appear to be nearly identical with the regular Kona's, though the cargo area looks to be somewhat reduced in size.

Long story short, the Kona Electric is exactly what it looks like: an all-electric version of the regular mass-market internal-combustion Kona that doesn't require big compromises to own. 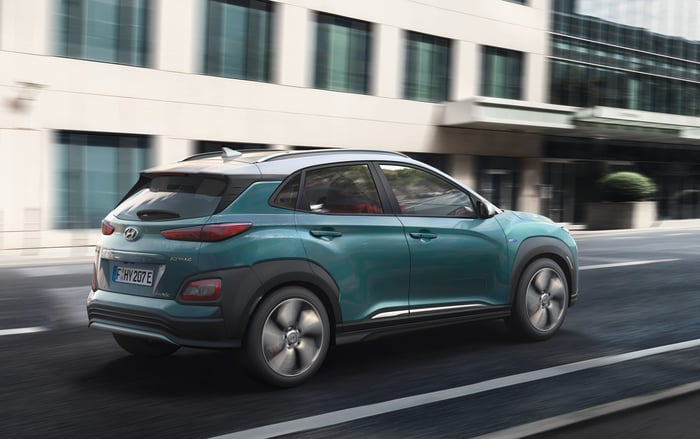 The other big question: How much will it cost?

Hyundai hasn't said -- and note that even when it does tell us, European prices could differ from what it'll charge in the U.S., if and when the Kona Electric arrives on our shores.

But I think the range options give us a clue as to how Hyundai will price its new battery-powered ride, if we assume that the shorter-range Kona Electric is aimed at the Leaf and the longer-range version at the Ampera-e/Bolt.