Please ensure Javascript is enabled for purposes of website accessibility
Log In Help Join The Motley Fool
Free Article Join Over 1 Million Premium Members And Get More In-Depth Stock Guidance and Research
By Bram Berkowitz – Updated Jun 3, 2020 at 11:34AM

In a look at regional banks between $40 billion and half a trillion dollars in assets, these had some of the lowest price-to-tangible-book values in the group.

Merger and acquisition (M&A) activity has been put on pause in most industries, and banking is certainly no exception. However, Tom Michaud, president and CEO of Keefe, Bruyette & Woods (KBW), a bank research firm and investment bank, recently said on CNBC's The Exchange that he expects M&A activity -- which was occurring at a high rate in the banking industry prior to the coronavirus -- to resume once economic conditions calm down. Notably, Michaud said to look at price-to-tangible-book (P/TBV) valuations to get an idea of the buyers and sellers, with those banks that have high P/TBVs being positioned to buy and those with lower P/TBVs being potential acquisition candidates.

Tangible book value shows the value of a company if it were going out of business and had to liquidate all of its assets. It excludes goodwill and other intangible assets because they can't be converted into assets of value during a liquidation event. While the market is volatile and valuations seem to constantly be changing, I examined the P/TBVs of most of the large regional banks ranging from $40 billion in assets all the way to nearly half a trillion in assets to better understand the M&A landscape right now. 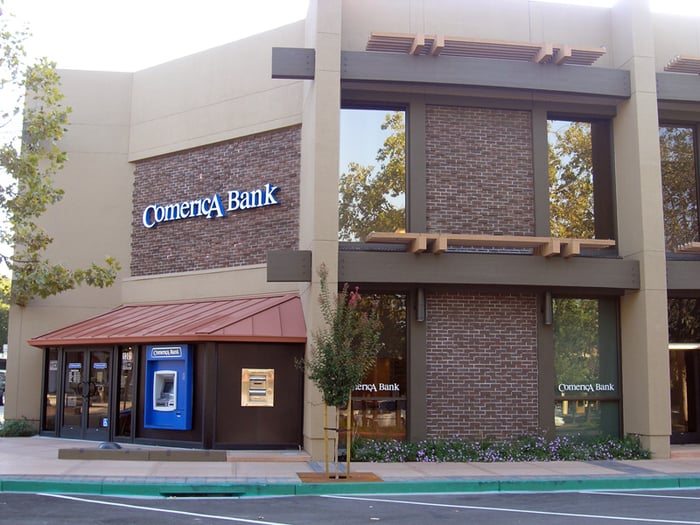 Synovus Financial (SNV 0.67%) is a $50-billion-asset institution based in Georgia that also operates in Alabama, Florida, South Carolina, and Tennessee. With a P/TBV of 0.77 as of Wednesday morning, it's at the lower end of large regional banks. Synovus only reported a profit of $38.5 million in the first quarter, down 68% year over year. Before that, however, the bank had delivered some attractive returns. In the last quarter of 2019, Synovus delivered a 1.27% return on assets (ROA) and a 13% return on equity (ROE) -- both strong results. Additionally, non-interest revenue made up nearly 22% of total revenue at the company in the first quarter.

Synovus offers a range of asset management, brokerage, capital markets, and other services that bring in fee income, which is going to be very attractive in today's low-interest rate environment, when it's hard to make significant yield on loans.

Trading at a P/TBV of 0.84 early Wednesday, Citizens Financial Group (CFG 1.51%) would be an attractive purchase, especially if the acquirer is looking to build a presence in the wealthy -- and competitive -- northeast market. A bank that acquires Citizens would instantly hold the No. 1 deposit market share in Rhode Island and New Hampshire, and the No. 3 deposit market share in Massachusetts. It would also see some nice deposit gains in a handful of other states.

Profits at Citizens in the first quarter of the year dropped 92% year over year, but the bank was a solid performer on ROA and ROE before the coronavirus, and non-interest income made up nearly 30% of total revenue in Q1. The thing with Citizens is at roughly $177 billion in assets, the only likely banks that are large enough acquire the bank outright would be PNC Financial Services, U.S. Bancorp, or one of the larger international players, although a merger of equals is not out of the question.

The roughly $73-billion-asset Comerica (CMA -1.62%) operates largely in Texas, California, and Michigan, but also in Arizona and Florida, with some select business in several other states, as well as Canada and Mexico. The bank struggled in the first quarter with a $65 million loss, but Comerica brings a large fee business and an extremely cheap source of funding. Non-interest income made up more than 31% of total revenue, and comes from a diverse stream of fees that matriculate from asset management, brokerage services, foreign exchange services, and other traditional bank fees. Comerica also has an incredibly cheap source of funding, with 47% of its deposits from non-interest bearing sources. The bank's total cost of funds is just 0.60%. Cheap funding sources will be sought out in a low-rate environment, because while low rates near zero bring deposit costs down across the board, once bank deposit and funding rates catch up with interest rates (there is always a lag), then there will be very few moves banks can make to keep getting those funding costs down. The bank recently traded at 0.83 P/TBV.

The Ohio-based Fifth Third Bancorp (FITB -0.28%) is an $185 billion asset institution with an additional presence in Kentucky, Indiana, Michigan, Illinois, Florida, Tennessee, West Virginia, Georgia, and North Carolina. In addition to traditional banking products, Fifth Third is one of the largest money managers in the Midwest, with $374 billion in assets under management. This large asset management business, along with other sources of non-interest income, makes the bank an attractive acquisition candidate. Non-interest income fell significantly in the first quarter of the year, but normally makes up close to half of total revenue. The bank recently traded at a 0.97 P/TBV. Like Citizens, this is another bank that likely has limited suitors because of its size.

The $156-billion-asset Ohio-based KeyCorp (KEY -0.06%) would be another large bank for an acquirer to land. Recently trading at 0.97 P/TBV, the bank operates in 15 states, offering enormous geographic diversity. In addition to the Midwest, the bank could offer an acquiring company a nice batch of deposits on the West Coast in states like Oregon and Washington, a presence on the East Coast in states like Vermont and Maine, and even a large deposit base in Alaska.