Please ensure Javascript is enabled for purposes of website accessibility
Log In Help Join The Motley Fool
Free Article Join Over 1 Million Premium Members And Get More In-Depth Stock Guidance and Research
By Adam Levy – Jun 3, 2020 at 9:21AM

Pinterest's new shopping features keep it one step ahead of the competition.

Pinterest (PINS 5.30%) has released several updates to its shopping features over the last couple of months. Pinners -- what Pinterest calls its users -- can now find products based on pins they've saved to boards, new searches, and even by taking a new photo in its Lens camera. It's creating style guides based on common search terms, artificial intelligence, and its deep catalog of images to recommend trending styles. It also partnered with Shopify to enable merchants to easily import their catalogs to Pinterest and create shoppable pins. And it partnered with publishers and personalities to curate products.

Pinterest wants to make shopping in its app "like flipping through the pages of your favorite catalog that feels handpicked for you."

With e-commerce sales accelerating amid stay-at-home orders during the coronavirus pandemic, Pinterest isn't the only company vying for business from both shoppers and merchants. Facebook (META 5.37%) launched Shops last month, and Alphabet (GOOG 2.70%) (GOOGL 2.62%) subsidiary Google reworked its Shopping tab to primarily feature free listings instead of paid ads in April with the goal of providing more engaging search results. 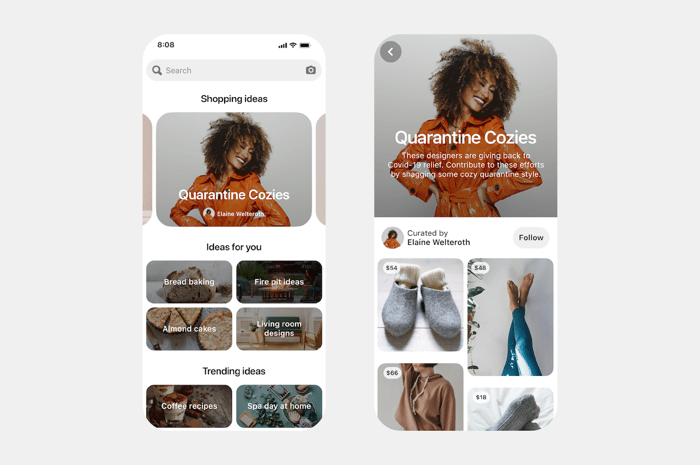 The other product search engine

Pinterest doesn't see its main competition as other social media platforms like Facebook or Instagram. It sees a bigger overlap between its business and search engines. In fact, it named Amazon (AMZN 3.15%) first on its list of competitors in its IPO filing with the SEC. Amazon isn't just the biggest online retailer, it's the primary destination for online product searches.

Amazon has leveraged its position as a product search engine into a sizable advertising business. In fact, Amazon's ad business brought in more than 10 times the revenue of Pinterest's last year.

Beyond its search volume, one of the reasons for the success of Amazon's advertising business is the reduced friction and direct attribution enabled by checking out through Amazon. That's the same feature Facebook is trying to copy with Shops. Google has tried to emulate Amazon's success with several iterations of shopping features and checkout options, but none have built significant traction.

Pinterest's efforts to improve organic product discovery through new search features and curation -- along with bringing more products onto the platform -- ought to drive more checkouts. The trend is already growing. Pinterest says engagement with Product Pins increased 44% over the past year, and traffic to retailers more than doubled. As pinners habituate shopping via Pinterest, the value of shoppable ads on the platform increases.

While shopping on Instagram has become increasingly popular -- especially with the product team leaning into the behavior and making it easier for users -- it's still not on the same level as Pinterest. About half of Pinners used the app for shopping in early 2019, according to a Cowen survey. That number has only gotten bigger over the last year based on the data Pinterest has recently reported around increases in shopping on its platform.

Still, Pinterest doesn't quite have the same reach as Instagram or Facebook. Its user base leans heavily toward women. Their interests may be more homogenous than Facebook users' interests. And the total user base -- 367 million -- pales in comparison to both Instagram and Facebook. Half of Pinterest users shopping is equal on an absolute basis to less than 10% of Facebook users shopping on the platform. That is to say, not every merchant will be able to get value from Pinterest.

However, merchants that can get value from Pinterest could get a lot of value. A highly concentrated group of shoppers providing explicit product interests through searches and saved images provides a goldmine of data for Pinterest to help advertisers market their products. And the ability to checkout on Pinterest provides excellent information about what's working and what isn't. As Pinterest pushes forward with new shopping features, Facebook and Google are merely playing catch-up with less focused products.