Airlines are beginning to rebuild their schedules, and that means more demand for airplanes and spare parts.

Airline stocks left for dead just a month ago are now soaring higher on the early signs of a post-pandemic recovery, and the elation sweeping through the sector is affecting shares of Boeing (BA -3.09%) as well as companies that make up the aerospace giant's supply chain.

It has been a rough year for airlines and the companies that sell to them. The COVID-19 pandemic has brought global travel to a screeching halt and caused carriers that came into 2020 focused on expansion to instead scramble for survival. Flights have been cut, and planes have been grounded, causing demand for new Boeing planes and spare parts to fall as well. 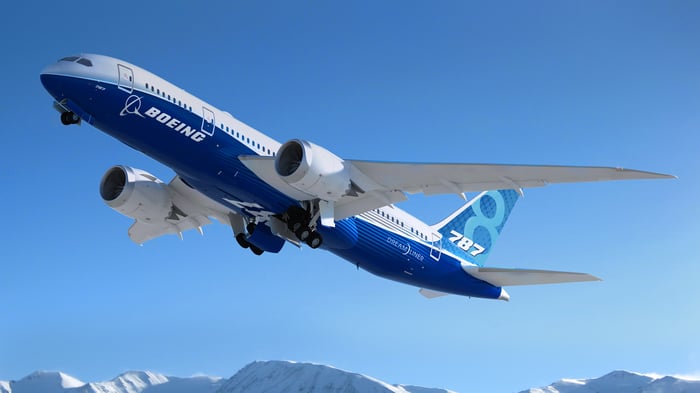 The stocks have fallen as a result, but investors are beginning to warm to travel again thanks to some indications that demand is bouncing off its April lows. American Airlines Group on Thursday said it was restoring a significant number of flights as travel interest has returned. The airline said it averaged 110,330 passengers per day in the last week of May, more than triple the 32,154 daily passenger average for April.

The Transportation Security Administration said Thursday was the busiest day for airline security screeners since March 22. A better-than-expected jobs report is also giving stocks a lift, as it's viewed as a sign the economy is beginning to recover.

If airlines continue to rebuild their schedules, that means some of those grounded planes will have to come back into service. That's good news for engine makers GE and Raytheon Technologies, as well as component makers like TransDigm, Triumph, and Heico. It could also mean airlines will not need three years or more to fully recover and resume buying new planes, as Boeing fears, which would be a plus for Boeing and its former subsidiary Spirit AeroSystems.

There are a lot of "ifs" fueling this rally, and investors should remain cautious. Travel does seem to be recovering, but TSA screening volumes are still down substantially year over year. American is restoring flights but will still fly just 55% of its July 2019 capacity this summer.

This is still the early stages of what figures to be a multiyear turnaround, and until we know for sure there won't be a second wave of the pandemic, the recovery still feels fragile. Boeing has a number of other issues on its plate, including getting the grounded 737 Max back into service, and it's uncertain the company's larger planes will be of interest to airlines if and when they start buying again.

It does appear Boeing shares have bottomed out, but if there's an airline recovery, I believe it's going to initially favor parts suppliers like Heico and TransDigm over Boeing and new planes. Even assuming the 737 Max is certified to fly again later this year, Boeing is going to need time, and money, to get the planes that have been made but not yet delivered off its books.

We're headed in the right direction, but I doubt the commercial aerospace sector turbulence is over. So, keep your seatbelt fastened if you do choose to buy in.