A good outcome at a key weekend meeting had investors excited all over again, and very big stock price gains were the end result.

The thing is, this isn't a single day of gains. These three stocks also witnessed massive price increases on Friday June 5. The numbers are astounding. Over the past five trading days, Chesapeake is up nearly 250%, Callon roughly 175%, and Centennial 90% or so. There's one very big reason for the incredibly upbeat mood on Wall Street. But first, some important backstory. 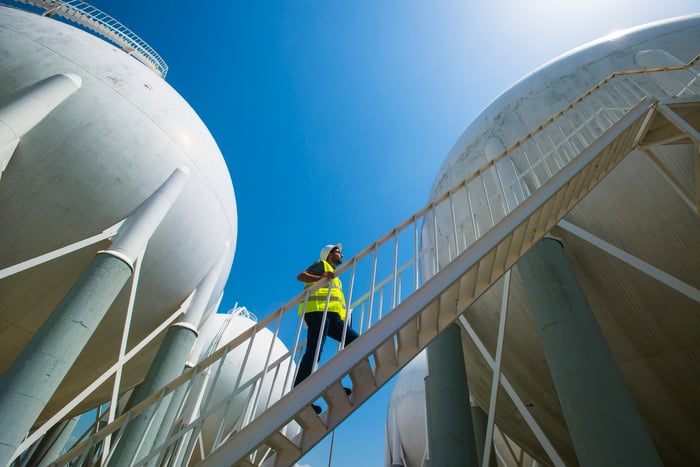 The big issue for energy companies this year has been a terrible mismatch between supply and demand. There's just way more oil than has been needed, thanks to long-term growth in U.S. onshore production, infighting within OPEC, and the dramatic fall in demand because of the worldwide effort to contain the spread of COVID-19. Adding to the problem is that the extra oil and gas being produced was put into storage, and will need to be worked off before the supply/demand mismatch is fully resolved. It got so bad that companies even started to hire the tanker ships that help ferry oil around the world to act as seaborne storage vessels (a terribly expensive way to store oil). In the heat of the coronavirus scare, oil prices temporarily dipped below zero, meaning that oil producers were, theoretically, paying people to take their production.

Smaller energy companies, those with heavily leveraged balance sheets, and names with relatively high break-even points were punished by investors. Chesapeake, Callon, and Centennial all fall into at least one of those categories, if not more than one. In fact, there have been very real concerns about solvency, and some companies have already had to file for Chapter 11 protections because of the steep fall in oil prices. For reference, Centennial's debt-to-equity ratio was 45% at the end of the first quarter, and Callon's was 114%. Industry giant Chevron's debt-to-equity ratio was 15%. Chesapeake took one-time impairment charges in the first quarter that pushed shareholder equity into negative territory, meaning that its debt-to-equity ratio was also negative -- a troubling sign for shareholders.

To highlight just how bad things got, each of the stocks here were down by more than 90% at one point this year. In fact, even after the huge gains over the last five days, Callon and Centennial are still off by around 50% in 2020, with Chesapeake down by a huge 75% or so. In other words, take the big gains over the last week or so with a grain of salt, there's still a lot of ground to make up. And, importantly, it appears that investors still think there's a lot of risk. 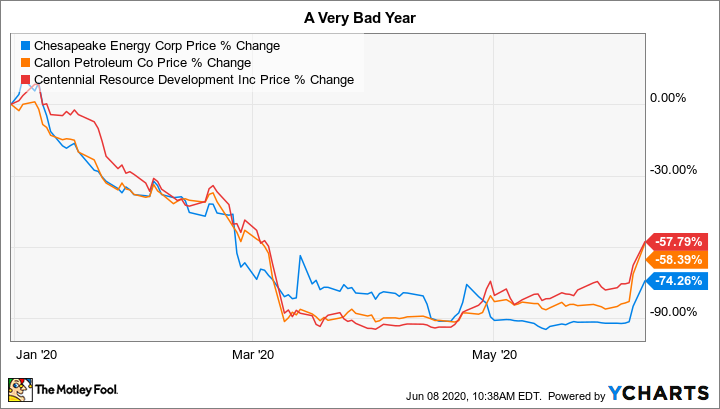 Which brings up the good news. On Friday it was rumored that OPEC had agreed to production cuts and was set to meet over the weekend to finalize a deal. That was why investors were so cheery on June 5. Sometimes, though, OPEC disagreements result in last-minute plan changes. That wasn't the case this time around, with OPEC actually meeting over the weekend and hammering out an agreement. That's why investors were so excited, again, in early trading on June 8. Production cuts should help resolve the supply/demand imbalance, aided by the restarting of economies around the world that had shut down because of COVID-19. All in, it's really good news. If the cuts help get oil prices moving sustainably higher, investors will have been correct to be so enthusiastic.

Another problem OPEC has with these agreements is actually living up to what it says. And, despite the positives here, energy prices weren't actually up in early trading on June 8. A lot of the excitement in the energy patch is based on the hope that the supply/demand environment will keep improving. Indeed, it has been, but the changes aren't happening overnight (or in two days of trading). Moreover, higher oil prices will help companies financially, but they won't resolve all issues. For example, a heavy debt load will remain a heavy debt load no matter what price oil trades at. Fixing that situation is easier with higher oil prices, but higher oil prices alone don't ensure the situation will get fixed.

Big stock price gains are exciting, but investors still need to tread carefully in the oil patch. The news is getting better, but there are still a lot of problems to overcome.