The arrangement complements a recently announced pilot project with fast food restaurants in the country.

Beyond Meat (BYND -5.84%) is in front of significant expansion in Asia. The alt-protein foods maker has signed a distribution deal with China's Sinodis, a company that specializes in distributing foreign comestibles in the country.

Sinodis, which revealed the news in a press release published on Monday, distributes goods to around 4,500 customers throughout China, including restaurants, wholesalers, and hotels. It says it is the nation's leading distributor of imported food products. 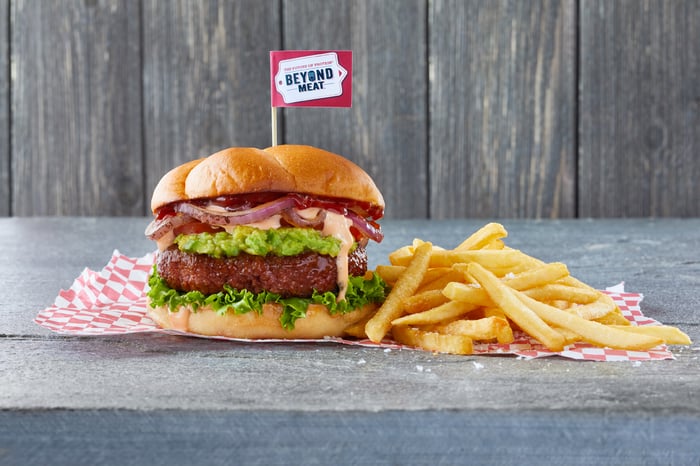 The Beyond Meat/Sinodis arrangement covers a pair of the former's more popular products, Beyond Beef and the Beyond Burger. Both have quickly made inroads on the American market in supermarket chains and, in the case of Beyond Burger, in restaurants as a menu item.

Sinodis quoted Beyond Meat's chief growth officer, Chuck Muth, as saying: "China has a large population and a strong interest in plant protein products. We are committed to strengthening infrastructure to support our long-term China Development strategy."

The Sinodis agreement comes shortly after Beyond Meat announced another China deal. Last week the company revealed that Yum China would introduce some the company's products in several of its signature restaurants in the country for a limited time. The Beyond Burger has been made available at five KFC locations, and in tacos sold at three Taco Bell outlets. Pizza Hut is also offering the Beyond Burger.

Investors might be adopting a wait-and-see attitude about Beyond Meat's latest development. On Tuesday, the company's shares closed down by almost 2.9%, a steeper fall than those suffered by many fellow consumer goods stocks, and the major equity indexes.