Please ensure Javascript is enabled for purposes of website accessibility
Log In Help Join The Motley Fool
Free Article Join Over 1 Million Premium Members And Get More In-Depth Stock Guidance and Research
By Billy Duberstein – Jun 11, 2020 at 7:45AM

While many "out-of-home" stocks have rallied strongly since the beginning of June, the "stay-at-home" technology space is still looking good going forward. After all, the COVID-19 pandemic has accelerated many technology trends, including e-commerce, work-from-home, remote education, and tele-medicine. And last I checked, COVID-19 is still out there and we don't yet have a vaccine.

All of these trends mean enterprises will have to digitize their organizations as quickly as possible, while also looking to reach consumers even if they're stuck at home. Two leading companies that can help businesses accomplish these feats are Alphabet (GOOG 0.02%) (GOOGL -0.01%) and Datadog (DDOG -1.52%).

Let's dive in and see which is the better buy today. 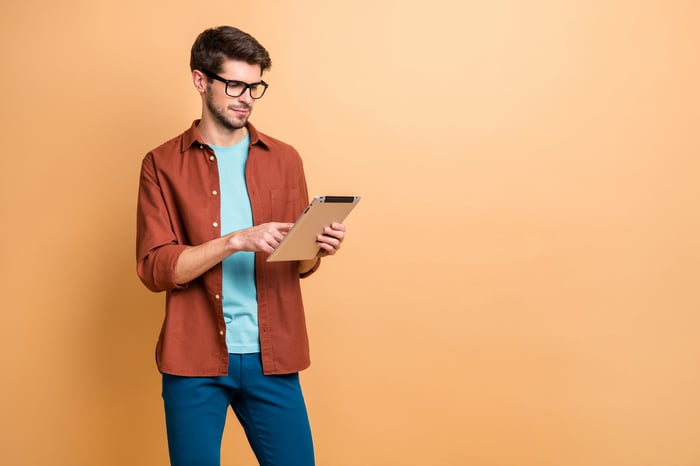 Most people are familiar with Alphabet's Google search engine, as well as its YouTube online video service. With many stuck at home, usage of Google search as well as YouTube surged in the first quarter, with COVID-19-related activity on Google search rivaling that of the Super Bowl. Even YouTube premium subscriptions increased during the quarter, according to management. That also makes sense in light of many people potentially cutting the cord on traditional cable, an existing trend that may have been accelerated by the lack of live sports.

Even with the COVID-19 pandemic hitting the U.S. hard during the final two weeks of the quarter, advertising on YouTube was a notable standout, as YouTube exited March with revenue up 9% year-over-year, thanks to an increase in demand response advertising. With search advertising down mid-teens exiting the quarter and Google's network partner advertising down low double digits, that's really impressive.

Even other non-core Alphabet products and services saw a pickup in demand in Q1, with Chromebook sales spiking 400% over the prior year in the week ending March 21. Obviously, it was also a strong quarter for Google's Meet video conferencing service, which saw a tremendous thirtyfold increase in usage.

The point is, as businesses start to reopen and look to attract or remind customers of their reopening, Google's properties look like prime real estate on which to advertise.

In addition to reaching customers, Alphabet is also helping enterprises digitize their operations. Alphabet has done a great job of growing its Google Cloud Platform into a formidable number three player in the cloud infrastructure sector, where it's only one of three major players that can compete. Realizing the importance of cloud, Google has invested heavily over the past few years to catch up to the cloud leaders, hiring ex-Oracle (ORCL -2.01%) executive Thomas Kurian in 2018 and spending big on data centers  to cater to enterprise clients since that time.

That move looks like it's paying off, with the company's cloud segment surging 52% in the first quarter, and that was in a quarter marred by the outbreak of COVID-19. Even better, management said that the underlying Google  infrastructure-as-a-service platform grew at an even higher rate. According to a recent report from research firm Canalys, Google Cloud grew its infrastructure service by 87.8% in 2019, increasing its market share from 4.2% to 5.8%.

Datadog keeps tabs on all your tech

Datadog's platform helps organizations track and manage the myriad clouds, data centers, databases, applications, and other corporate IT elements that have been expanding at a breakneck pace over the last 10 years. Datadog also now has over 400 different third-party integrations, making it a very important unifying platform for any organization.

While there are many other competitors that offer infrastructure monitoring, cloud monitoring, application monitoring, or log management, Datadog incorporates all of these in an easy-to-use interface -- a powerful combination.  Apparently, customers are thrilled, as Datadog has amassed 11,500 customers in just 10 years. And a decade into its existence, the company is still growing at a breakneck pace. Last quarter, revenue surged 87%, even in a COVID-19-affected quarter, while management also raised full-year guidance on the recent surprising strength.

While both Datadog and Alphabet help corporations digitize their infrastructures, in terms of financial characteristics, they're very different. Alphabet is huge, with a market cap of nearly $1 trillion, and is highly diversified among its core digital advertising, cloud computing, hardware and app store, and moonshot projects it's seeding under its "other bets" segment. Alphabet is also highly profitable, with operating margins of 22% over the past 12 months -- though that included one quarter affected by COVID-19 ad slowdown.

Meanwhile, Datadog is more of a one-product platform, making it less diversified, and much more risky to own than Alphabet. Still, Datadog actually showed a slight operating profit in its recent quarter, which is somewhat rare for such a high-growth software-as-a-service company, many of which are posting operating losses as they invest in growth. Impressively, Datadog expanded its gross margins from 73% to 80% over the past year, suggesting big profits could be down the road as the company continues to scale.

Of course, Datadog's breakneck growth is reflected in its valuation, which is, predictably, much higher than Alphabet's. Looking at each company's pre-COVID "normal" growth rates from last year, along with their current valuations, you can see that investors are paying up heavily for Datadog's outperforming growth.

You're paying a pretty penny for Datadog's growth

To my eyes, Alphabet is a much better value today, especially for the risk-off investor. Alphabet has an enormous cash pile over $110 billion, is highly profitable, and is growing fast enough that its 29.4 PE ratio seems like a solid value. Meanwhile, Datadog's 53.9 price-to-sales ratio is very expensive.

That being said, companies growing as fast as Datadog often trade at seemingly high valuations, yet can still be winning stocks over the long-term. Thus, for those willing to make a riskier bet in return for higher growth potential, Datadog would make a fine candidate. Just be prepared to weather some serious volatility in the meantime.

Make no mistake, Datadog is a very good company that I'd love to have in my portfolio -- just at a lower valuation. That makes the choice between the two a question of style, with older investors probably leaning toward Alphabet. Yet for younger twentysomethings, it's not crazy to bet on Datadog, even at these levels, though Alphabet also seems like a solid pick for investors of any age, thanks to its growth and value combination.