A second wave of the pandemic would be very bad news for airlines.

Airline shares headed south for the third consecutive trading session, weighed down by a rise of new COVID-19 cases in tourism hot spots that some fear could be the start of a second wave to the pandemic. There was also some company-specific news that helped remind investors that even if travel demand is slowly improving, we are in for an extended downturn.

Even the relative "winners" in the sector were having rough days, with Southwest Airlines (LUV -2.53%) and JetBlue Airways (JBLU -0.30%) each off by more than 8%.

Airline stocks have bounced off of March and April lows thanks to their efforts to raise cash and some encouraging signs that travel demand is slowly beginning to return. But the industry is still vulnerable, and if revenue does not continue to trend upward in the months to come, at least some of the airlines could face liquidity issues.

With that in mind, airline investors are closely tracking the spread of the pandemic, and Thursday brought ominous signs. New COVID-19 cases are soaring in states including Arizona, Florida, Texas, and California, raising fears of a potential second wave that could reverse state reopenings and send demand for travel back to March lows. 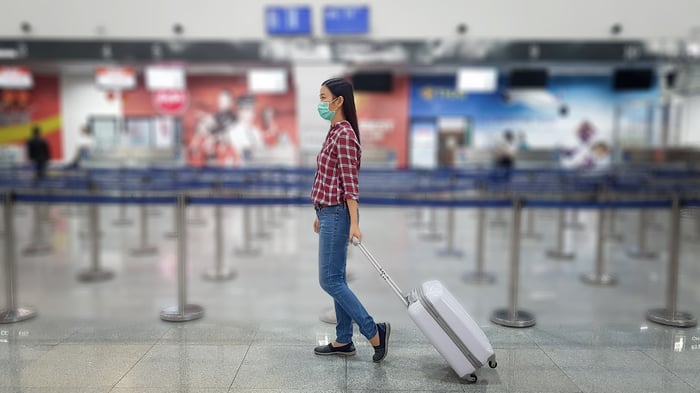 Investors got a fresh look at how dire the situation is for carriers from a Delta securities filing in which the airline said it is seeking concessions from lenders to avoid falling out of compliance with certain debt requirements. The issue is the airline's so-called "fixed-charge coverage ratio," a measure of its ability to pay fixed expenses like rents and aircraft payments based on cash flow.

"Based on the reduction in demand that we have experienced and are continuing to experience as a result of the COVID-19 pandemic, we expect that we will not be able to satisfy the current minimum fixed charge coverage ratio by early next year," Delta said in the filing. "We plan to seek and expect to obtain amendments to these credit facilities prior to a breach."

American Airlines also provided an update during the company's virtual annual meeting. CEO Doug Parker said American expects to bring its daily cash burn rate down to $40 million by the end of June, ahead of its $50 million per day target.

Issues like cash burn and even Delta needing to rework debt covenants, which should be a formality, are likely priced into airline shares. But the idea of a large second wave to the pandemic is terrifying on a lot of different levels.

The only reason the cash burn rates are not alarming is that we know the airlines have billions in the bank, and we hope that the current crisis does not continue indefinitely. Should a second wave hit as hard as what happened in March and April, the timetable for a recovery would also be pushed back, and some of the airlines have already pulled a lot of the easy levers they have to raise more cash and buy more time.

I still think in all but the worst of scenarios we can avoid a U.S. airline bankruptcy, but given the uncertainty with the pandemic, it is impossible to say for sure. And if travel demand remains weak into the fall, we are almost certain to see a dramatic shrinking of the industry.

For investors who want to buy into the industry, it is best to limit your exposure to a small part of your overall portfolio and to focus on the companies that stand the best chance of surviving whatever is ahead.