The kid-friendly content maker is flooding the market with ultra-cheap shares.

Shares of Genius Brands International (GNUS -7.02%) fell as much as 32.8% on Thursday morning as the company prepared a dilutive stock offering. The stock recovered some of the lost ground later in the day based on buyout rumors involving Walt Disney (DIS -2.60%) as a potential buyer, but the company behind kid-friendly shows such as Stan Lee's Superhero Kindergarten and Baby Genius still traded 20% lower at 3:20 p.m., EDT. 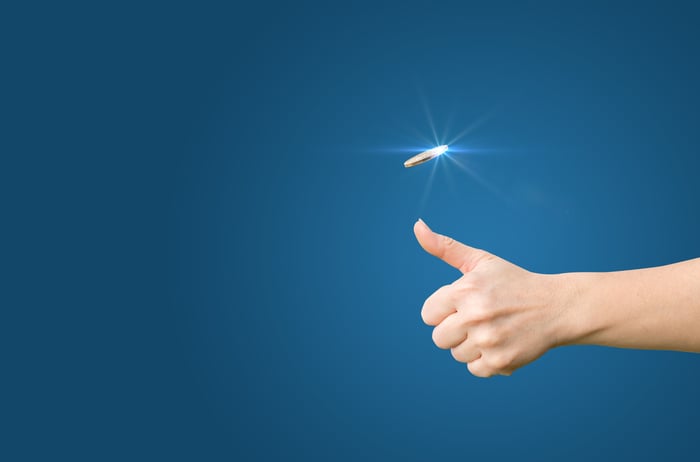 Where will the coin land? Nobody knows. Image source: Getty Images.

Genius Brands is planning to sell a total of 60.1 million shares to a predetermined group of investors. Technically, the investors are converting their stock warrants into ordinary shares at exercise prices as low as $0.21 per share. The company will receive a maximum of $6.1 million (minus warrant registration expenses) from this maneuver, based on the exercise prices of the warrants. The company currently has 96 million shares outstanding, of which 40.5 million shares are trading on the public stock market.

As for the Disney takeover rumor, the report came from fan blog DisneyGuide, which is expressly unaffiliated with the House of Mouse and cannot offer any insider information. The blog simply noted that there is "increased chatter" around the idea in quarters unknown, and Genius Brands CEO Andy Heyward has a history of selling companies to Disney.

Thursday's buyout whispers are extremely speculative, but the share dilution resulting from the warrant conversions is quite real. Genius Brands has been hyper-volatile in recent weeks, leading up to the June 15 launch of Kartoon Channel, its ad-supported, video-streaming service for kids. The stock is trading 71% below last week's 52-week highs and 6,500% above December's lows. Genius Brands desperately needs Kartoon Channel to be a huge hit, assuming that the Disney rumors are as flimsy as they sound.

I have no idea where this volatile stock will go next, but there are probably lots of sudden jumps and crashes to come for Genius Brands' shareholders.