Please ensure Javascript is enabled for purposes of website accessibility
Log In Help Join The Motley Fool
Free Article Join Over 1 Million Premium Members And Get More In-Depth Stock Guidance and Research
By Daniel Miller – Jun 11, 2020 at 10:28AM

After a wild run-up in stock price, Hertz shares are giving up gains after sobering notes from the OECD.

Shares of Hertz (HTZG.Q), a vehicle rental company currently dealing with bankruptcy, are finally heading back down to earth, declining as much as 32% Thursday morning after a wild run-up in share price. Investors may finally be coming to grips with the fact that current shares are likely headed to zero. Making things worse, sobering comments from the Organization for Economic Cooperation and Development (OECD) dragged down broader markets Thursday morning.

Starting first with the comments from the OECD -- and getting to how this affects Hertz, Avis Budget Group (CAR 3.40%), and other transportation stocks in a moment -- the organization released its economic outlook with an unusual two-scenario report. One scenario shows COVID-19 continuing to recede, and the other shows the impact of a second wave later in the year -- the OECD's chief economist, Laurence Boone, noted that both scenarios seem equally likely at this point. In the first scenario, U.S. gross domestic product (GDP) declines 7.3% for 2020 and rebounds 4.1% in 2021. In the second scenario, U.S. GDP slides 8.5% in 2020 and rebounds only 1.9% in 2021. Also depressing for investors were predictions that the unemployment rate would still be in the high single digits in 2021, even in the best of scenarios. 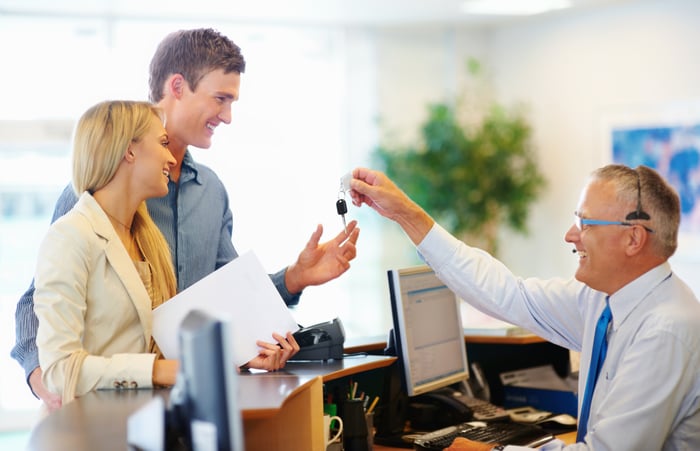 Here's the problem for Hertz and Avis: Both companies rely very heavily on transportation to and from airports. Air travel slowed to a near standstill over the past three months, and only now are we seeing a rebound in air travel -- but a second wave could bring back restrictions and set Hertz and Avis back to square one with little revenue generation. For Hertz the second scenario would also complicate the bankruptcy process, as it's trying to negotiate with lenders and remain in operation in some form. It's possible Hertz will restructure the company and issue new shares to give creditors and new investors equity in a new Hertz. But if a second wave appears likely, creditors and new investors are going to shy away from equity in the new Hertz, and could have more leverage in their negotiations.

Currently Hertz is going through the bankruptcy process and is appealing the New York Stock Exchange's notice of delisting. Hertz has a massive pile of debt that it will need to satisfy, and because the debt pile is so large, it's likely that current shareholders will be left with no value for their shares -- common shareholders are the lowest on the totem pole. The company's operations will continue using what cash the company has on hand until the bankruptcy process is completed.