Please ensure Javascript is enabled for purposes of website accessibility
Log In Help Join The Motley Fool
Free Article Join Over 1 Million Premium Members And Get More In-Depth Stock Guidance and Research
By Dan Caplinger – Jun 12, 2020 at 11:43AM

Friday morning brought some relief for hard-hit investors after Thursday's big plunge. Gains on Friday weren't nearly as large as the losses the markets suffered the day before, and even with the bounce, it still appears that investors remain highly uncertain about the future of the global economy. As of just before 11 a.m. EDT today, the Dow Jones Industrial Average (^DJI) was up 264 points to 25,392. The S&P 500 (^GSPC -1.02%) gained 26 points to 3,028, and the Nasdaq Composite (^IXIC) picked up 89 points to 9,581.

Underlying the action in major stock indexes, there's been a lot of turbulent trading in small and distressed companies. Day traders are touting their ability to profit from massive one-day moves in stocks, and the usual rules of investing are getting tossed aside in the speculative fervor. The best example of this is Hertz Global Holdings (HTZG.Q), which is seeing its stock respond favorably to one of the craziest situations ever seen with a company that's filed for bankruptcy protection.

Shares of Hertz were up 27% Friday morning as investors reacted to the latest news coming out of the rental car company's bankruptcy proceedings. With the stock having behaved extremely oddly, Hertz is now seeking to take advantage of investors' appetite for shares -- by offering them some more. 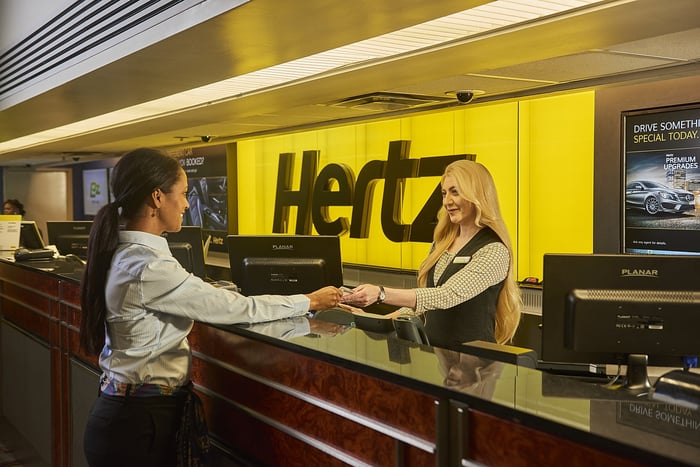 Hertz is looking to do a secondary stock offering with the hope of raising as much as $1 billion. Specifically, the move, for which Hertz has sought bankruptcy court approval, would involve selling almost 247 million unissued shares of Hertz stock to a financial institution, which would then presumably offer them to rank-and-file investors.

From Hertz's perspective, the move makes sense. On May 26, which was the first full trading day after it filed for bankruptcy protection, its stock closed at $0.555 per share. Since then, it has traded as high as $6.25 per share, and its current price is very close to where it was before Hertz made its bankruptcy filing.

Selling stock to reap potentially hundreds of millions of dollars of proceeds is a great way for Hertz to get financing to operate during its bankruptcy. It would also potentially allow the rental car company's creditors to recover more of their outstanding debt.

Why doesn't every bankrupt company do this?

Given Hertz's apparent success with this move, the obvious question is why other bankrupt companies haven't used this tactic. It's clearly better to sell stock and get cash that doesn't have to be repaid than it is to get traditional debtor-in-possession bank loans that receive top priority for repayment over other obligations of the company.

The simple answer is that in most cases, would-be stock investors aren't interested in buying shares that often fall to $0. Even Hertz acknowledged the risks involved for those interested in buying its stock right now, with a pledge to include in any prospectus the fact that "an investment in Hertz's common stock entails significant risks, including the risk that the common stock could ultimately be worthless."

Some bullish investors hope that the value of Hertz's rental car fleet will rebound enough to make the company solvent again. Yet many of those still trading Hertz's shares right now are likely just speculating that they can sell at higher prices before the music stops. That's a dangerous game, and it's burned most investors who've played it before with other companies.