Please ensure Javascript is enabled for purposes of website accessibility
Log In Help Join The Motley Fool
Free Article Join Over 1 Million Premium Members And Get More In-Depth Stock Guidance and Research
By Alex Carchidi – Jun 13, 2020 at 6:46AM

With the Allergan acquisition freshly closed and revenues from Humira falling, AbbVie needs to get its new products up and running rapidly.

American biopharma AbbVie (ABBV -1.05%) is renowned for its blockbuster drug, Humira, which was one of the best-selling drugs of the last 20 years. Since its 2013 separation from Abbott Laboratories (ABT -0.32%), AbbVie's stock has grown more than 160%. And with a dividend yield of 4.9%, AbbVie is quite attractive for investors yearning for returns.

But can AbbVie build momentum for growth, given that its best-selling products face a number of new competitors? What are AbbVie's goals for the next five years, and can it meet them? Will the company's mid-2019 acquisition of Allergan for $63 billion pay off? Do experienced investors think AbbVie's stock is worth buying? Let's find out. 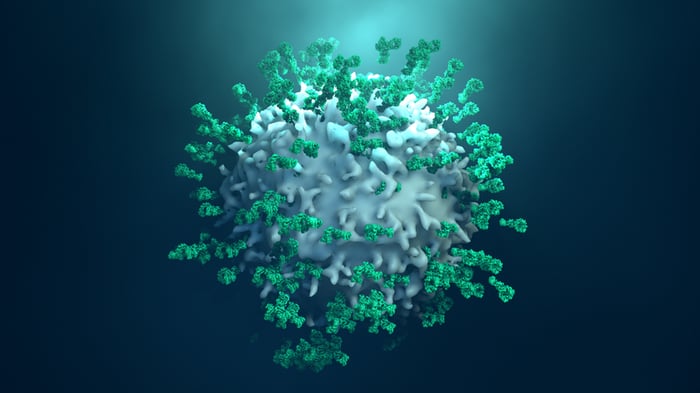 The remainder of this year and most of next year will probably not be an exciting time for AbbVie, as several of its established products face headwinds that will diminish sales. The company's curative combination drug for hepatitis C, Mavyret, is the poster child for falling revenue growth.

Since well before it got the green light for use in wider patient populations in 2019, Mavyret has been at risk of diminishing its target patient population to the point where the drug combination is not profitable to produce. In short, Mavyret is curing itself into obsolescence. This means that despite eating some of Gilead Sciences' (GILD -0.21%) market share for hepatitis C therapeutics in the lead-up to Solvaldi's revenues collapsing in 2017, AbbVie cannot assume that Mavyret will not meet the same unprofitable fate, especially as its sales started to fall in 2018 and then fell sharply by 15% in 2019. While most of the damage to AbbVie's earnings from declining Mavyret revenues is already done, don't be surprised if there is more pain reported in future earnings.

Elsewhere in its stable of approved drugs, Humira's revenues will continue to ebb as a result of competition from biosimilars created after AbbVie's patent expired in 2016. This is to be expected, as Humira has been on the market since 2002 and was one of the best-selling drugs in the U.S. during the 2010s. In total, AbbVie expects its worldwide revenues for Humira to decrease by as much as 30% in 2020, with markets like Europe experiencing 40% decreases. As of 2019, Humira accounted for around 58% of total net revenues, so earnings reports may be especially grisly for a time. Given that AbbVie has already repeatedly sought and received additional indications for Humira as recently as 2015, it's likely that the drug's earning growth potential will be largely exhausted soon. In summary, AbbVie will need to launch a credible replacement for its declining revenues from Humira in the next five years if it wants to stay stable, never mind continuing to grow.

In terms of the opportunities in the COVID-19 pandemic, it's possible that AbbVie's role in fighting COVID-19 is smaller than that of its competitors. While AbbVie announced last week that it was initiating a new program to develop a monoclonal antibody therapy for COVID-19, it's a relative latecomer to the scene compared to its peers like Pfizer (PFE 0.08%), which plans to have products hitting the market as early as October.

Furthermore, AbbVie's existing roster of antiviral drugs may not generate substantial revenues even if they are found to be effective for COVID-19. In the aftermath of the Israeli government mandating compulsory licensure of AbbVie's anti-HIV drug Kaletra, the company opted to drop its worldwide patent rights for the drug entirely. Later, researchers reported that Kaletra wasn't effective for COVID-19 anyway. If AbbVie does have a role in developing COVID-19 therapeutics or vaccines, it will likely be as a secondary collaborator rather than a leader. Will AbbVie's pipeline come to the rescue?

The only way for AbbVie to escape the doldrums will be to forge new collaborations and advance its pipeline programs to build new centers of growth.

Now that it has joined with Allergan, AbbVie has more than 120 pipeline programs, many of which are seeking approval for new indications for its existing drug stable. More than 60 of these programs are in mid- or late clinical trial stages, suggesting that AbbVie has no shortage of candidates to bring to the market in the long term. Of particular promise is the company's first-line treatment for multiple myeloma, Empliciti. If the drug successfully completes its ongoing phase 3 trials, it will be positioned to grab market share from long-entrenched competing products.

Some programs, like the treatment-resistant rheumatoid arthritis drug Rinvoq, are already approved for major indications, so it is reasonable to expect that revenues will continue to ramp up as new indications are added. AbbVie is also pursuing head-to-head comparison trials with competing products so as to take their market share, which may soon start to pay off for its newest drugs.

AbbVie's next five years will largely be characterized by the company working to transition smoothly from its former high-earning drugs to the revenue sources of tomorrow. To aid the process, it's possible that AbbVie will seek to acquire smaller companies to shore up its clinical-stage pipeline. Before it can make more acquisitions, however, AbbVie will prioritize integrating its resources procured from Allergan, which it purchased for cash and stock in 2019 for $63 billion.

Allergan is known for manufacturing the popular wrinkle-reducer Botox, but it also has a small roster of medical cosmetic products and eye care products both on the market and in active development. While Allergan's pipeline and products on the market do not overlap with AbbVie's current roster, the purchase does give AbbVie a much broader pipeline than it previously had and will also lead to an estimated $2 billion in synergies and cost savings by the third year after the closure of the deal.

AbbVie estimates that purchasing Allergan will lead to an immediate increase of its cashflows by as much as $19 billion. Nonetheless, the market did not initially recieve AbbVie's announcement of the purchase favorably. Once AbbVie's quarterly earnings reports reflect the earnings growth from Allergan's product roster, investors may change their tune.

As part of the Allergan acquisition, AbbVie sought transaction support from Morgan Stanley, which fully underwrote the deal for $38 billion. Subsequently, AbbVie also took on all $24 billion of Allergan's debts, leaving AbbVie with upwards of $67 billion in total debt. AbbVie's leadership claims that the additional revenues from Allergan's products will allow the company to reduce its debt by at least $15 billion by the end of 2021, with further payments throughout 2023 if everything goes as planned.

By 2025, AbbVie will have at least one wholly new drug on the market as well as a handful of newly approved indications for its older drugs. Given the state of the company's pipeline, it is highly likely that the new drug or drugs will compete in the oncology or immunology markets. While it remains unclear whether any of these new drugs have the same blockbuster potential as AbbVie's historical standbys, they will almost certainly allow the company to continue operating profitably and to grow at a slow rate. Nonetheless, AbbVie will also be experiencing tapering revenue growth for the indications it sought in the 2010s for its existing drugs. Likewise, long-standing products like Humira will be of declining importance, with fierce competition largely displacing it from the market.

In summary, AbbVie's next five years may be relatively low-growth, but its long-term growth prospects are still quite favorable, and the company's stable dividend is a good reason to invest. Look to AbbVie's yearly reports to see how effectively the company is handling its transitioning revenue sources, and don't be afraid to hold off on investing in this pharmaceutical stock if there are major delays with its most advanced pipeline projects.