Please ensure Javascript is enabled for purposes of website accessibility
Log In Help Join The Motley Fool
Free Article Join Over 1 Million Premium Members And Get More In-Depth Stock Guidance and Research
By Pearl Wang – Jun 14, 2020 at 11:00AM

The pet supply company is benefiting from secular trends, including a boom in spending on healthier, fresher pet foods.

Unlike many businesses struggling in the wake of global lockdowns and struggling economies, Freshpet (FRPT -0.22%) shares are up over 30% year to date.

While the company encountered some issues related to COVID-19, it has maintained its 2020 guidance. Additionally, Freshpet has some positive tailwinds helping its business, such as the fast-growing pet food industry, increased interest in healthier food for pets, and overall greater spending on various four-legged companions. Search data over the four weeks ending June 2 showed a 52% spike in search volume for the Freshpet brand. This pet food company, which offers refrigerated natural pet food made in the U.S., is seeing growing demand. 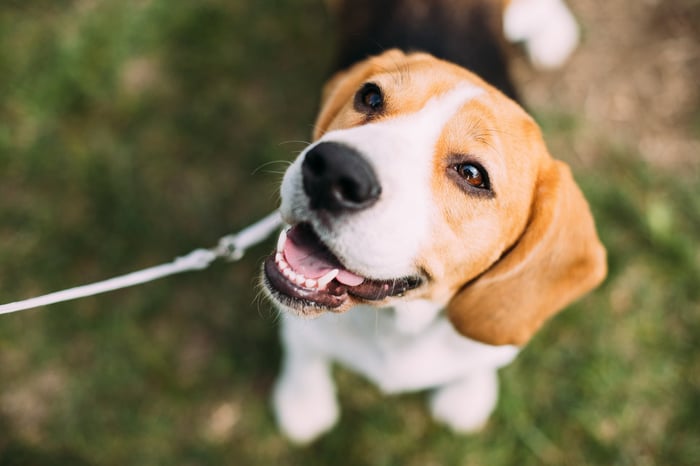 Demand for Freshpet products is consistent and growing

Freshpet revenue increased 28% year over year in the first quarter, and eight of its last nine quarters saw revenue increases of over 25%. The company also reiterated its full-year 2020 guidance in the latest earnings report.

There is a boom in pet ownership in the U.S. According to data from the American Pet Products Association, 68% of U.S. households -- 85 million all told -- have pets, up from 56% 30 years ago. This trend will likely continue, driven by millennials and Gen Z, which is now the largest generation globally. These younger groups are more likely to be pet owners than previous generations -- millennials and Gen Zers comprise 62% of pet owners, while baby boomers account for 32%.

Freshpet's business will benefit from both the growing popularity of having pets and the increased spending on them. According to the American Pet Products Association, Americans spent $72.56 billion on domestic animals in 2018, $3 billion more than they spent in 2017. Consumers spent the most on food for their pets, or $29.07 billion. Premium dog food was the most popular category. These trends bode well for Freshpet's revenue growth.

And pets eat roughly the same amount each day, providing some consistency in demand for Freshpet's products. The novel coronavirus has impacted the company's revenue to a lesser degree than those of other consumer discretionary companies. CEO Billy Cyr has touted the loyalty of customers: "Once you've adopted the Freshpet, you stick with it."

Recent nationwide store closures haven't hurt Freshpet's business, because the company's growth isn't contingent upon retailers promoting its products. Cyr elaborated on the latest earnings call, "We do not depend on retailers discounting or promotional activity to drive volume or trial. Advertising drives 80-plus percent of our growth." While retail store presence and promotions drive the remainder of Freshpet's growth, Cyr believes that incremental advertising can offset declines.

Kerry Health and Nutrition Institute's study of 2,000 consumers indicated that 99% of participants were willing to pay more for "fully transparent products." This means that consumers are very discerning about the quality and healthfulness of the foods they feed their pets. They don't want products with long, indecipherable lists of ingredients that are possibly full of additives or chemicals.

"I believe the human-animal bond is the number one ingredient in pet food, because feeding a furry family member is no different to connecting with human family members over food. It's all about love and wanting what is best for them," said pet lifestyle consultant Sandy Robins. As bonding with furry friends increases, owners will spend more on premium, fresh pet food.

Overall, Freshpet stock is appealing as it rides the strong tailwinds from growing consumer demand. In an economic slowdown, people will likely prioritize the health and well-being of their families, including their pets, over spending on other categories like clothing or entertainment. "If you look at premium pet food really over the last three recessionary periods, it's typically seen growth really through every one of those periods," noted President Scott Morris.