Please ensure Javascript is enabled for purposes of website accessibility
Log In Help Join The Motley Fool
Free Article Join Over 1 Million Premium Members And Get More In-Depth Stock Guidance and Research
By Will Healy – Jun 19, 2020 at 7:10AM

Beyond traditional toys, the company offers an "omnichannel" experience within its industry.

Investors have increasingly taken a second look at Hasbro (HAS -2.81%) in recent months. Due to popular brands such as Monopoly, Nerf, and Transformers, it has won the attention of millions of children and adults for decades.

Fortunately for the Pawtucket, Rhode Island-based company, board games are far from extinct. Moreover, with the alliances Hasbro has formed with media companies and an increased interest in video games, the company could turn its presence in these various arenas into a competitive advantage.

Why Hasbro could come back

At first glance, Hasbro might seem like a strange choice. Its position as the leading toy company may make little sense when kids have shown increasing interest in digital entertainment. Moreover, as the birth rate continues to fall, the overall demand for toys could decrease long term.

Now, the company can revive itself by borrowing a strategy from a related industry. In recent years, traditional retailers have often embraced the "omnichannel" to have a foot in both physical retail and e-commerce. Like its store counterparts, Hasbro has also built up synergies from its presence in both the physical and electronic game markets. Just as some customers still prefer to walk into a Walmart to buy a product, some consumers prefer board games or toys that they can hold in their hands. 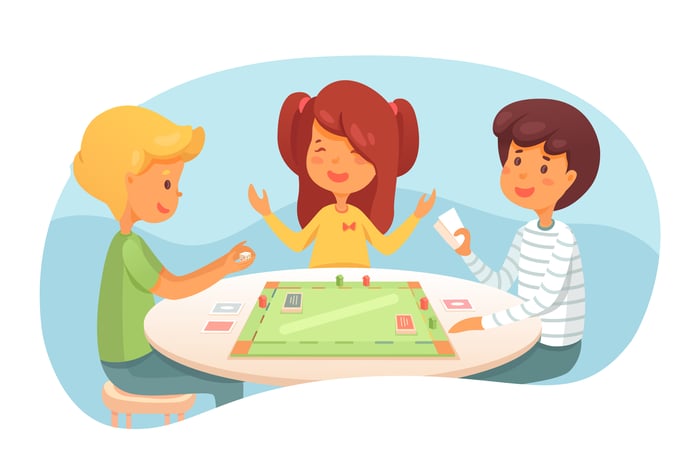 Still, while Hasbro continues to produce physical toys, it has also increasingly invested in digital options. Now that its subsidiary Wizards of the Coast has acquired Tuque Games, it competes with the likes of Activision, Take-Two Interactive, and Electronic Arts. This stands in contrast to archrival Mattel, which does not currently produce any notable video games.

More importantly, Hasbro has the opportunity to produce digital titles with licensed partners such as Walt Disney. It can then supplement that release with action figures or other toys.

Despite the promising tailwinds, I have long disliked this stock. Hasbro last hit the current price of approximately $76 per share almost five years ago. The liquidation of Toys 'R Us in 2018 contributed to significantly slower sales growth, almost wiping out three years of revenue gains. During that five-year period, earnings increased by an average of around 1.4% per year as digital entertainment, namely video games, succeeded at its expense. 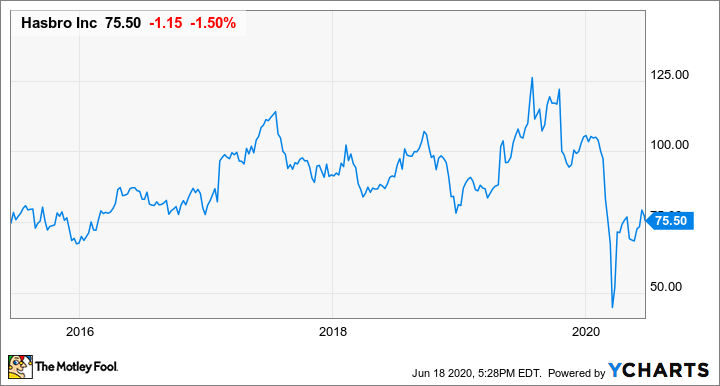 However, both an improved business outlook and a reasonable valuation have helped to change my view of the company. The forward price-to-earnings (P/E) ratio stands at about 20.3. Moreover, beginning in fiscal 2021, earnings should start rising by double digits as analysts forecast a 26.6% increase in profits. Over the next five years, they predict earnings will increase by an average of just under 10.6% per year.

Additionally, investors benefit from a dividend of $2.72 per share, good for a yield of 3.6%, well above the 1.9% average for the S&P 500. However, the payout ratio, or the percentage of earnings going to the dividend, now stands at over 80%. That could explain why the company may not hike the payout this year.

Nonetheless, the dividend has consistently trended higher since 2001. And with $1.24 billion in cash on hand, the company should have no trouble managing the $93 million quarterly dividend expense.

Hasbro has long remained stagnant as consumer trends and less favorable demographics hurt the company. However, like other retailers, Hasbro has developed a unique version of "omnichannel" by leveraging the benefits of its presence in both physical and digital games and toys. With a reasonable valuation, surging earnings growth, and a generous dividend, investors may want to roll the dice on this consumer discretionary stock.