Please ensure Javascript is enabled for purposes of website accessibility
Log In Help Join The Motley Fool
Free Article Join Over 1 Million Premium Members And Get More In-Depth Stock Guidance and Research
By Dan Caplinger – Jun 22, 2020 at 11:42AM

The stock market was mixed on Monday morning, opening generally lower but bouncing back from the worst of those losses after a few hours of trading. Nervousness about the rising numbers of COVID-19 cases in several countries and U.S. states has some fearing that the bull market from the March lows has gotten ahead of itself. Yet others still believe that the reopening of the economy will bring dividends. Just after 11 a.m. EDT, the Dow Jones Industrial Average (^DJI 0.00%) was down 57 points to 25,815. The S&P 500 (^GSPC -1.72%) fell 3 points to 3,095, but the Nasdaq Composite (^IXIC 0.00%) picked up 25 points to 9,972.

One of the biggest movers early Monday was Virgin Galactic Holdings (SPCE -2.01%). The space tourism portion of Sir Richard Branson's corporate empire has gotten a lot of press lately, and a key agreement announced this morning could open up a coveted destination for would-be space travelers. Virgin Galactic isn't big enough to move the whole market, but its stock saw a nice gain as a result.

A place to go in space

Virgin Galactic's stock rose 9% after having opened higher by double that. The move followed news from the company that it had entered into a key agreement with the National Aeronautics and Space Administration that could dramatically enhance the attractiveness of its space plane trips. 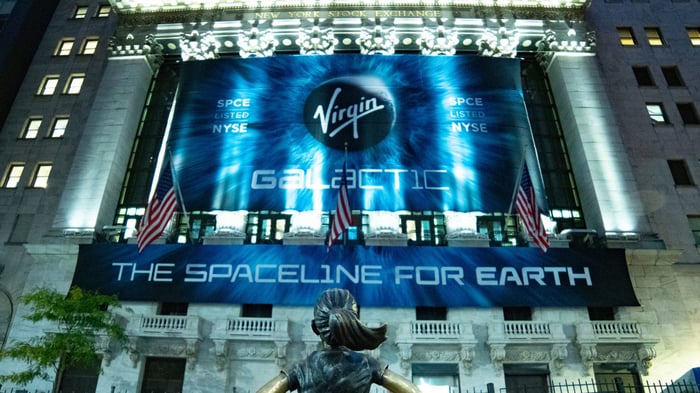 NASA's Johnson Space Center will work with Virgin Galactic under the terms of the agreement to make it possible for commercial enterprises and private passengers to "enable the development of a robust economy in low earth orbit." Virgin Galactic will come up with what the two parties called a "new private orbital astronaut readiness program," which will include the company finding prospective astronauts with funding to make missions to the International Space Station possible. NASA sees great potential for the space station for scientific and technological research and development, and getting Virgin Galactic on board could dramatically enhance the ability of private enterprise to take advantage of the resources the station has to offer.

Virgin Galactic CEO George Whitesides commented on the implications of the deal. Going beyond the space tourism angle will be a useful diversification strategy for the company, and, as Whitesides pointed out, the deal will "not only allow us to use our spaceflight program but also offer our space training infrastructure to NASA and other agencies."

The big question most investors have is whether the new NASA deal puts Virgin Galactic in the lead in the new space tourism industry. Some investors have also looked at Elon Musk's privately held SpaceX as a potential competitor, and SpaceX is already working with NASA in ways that are similar to what the new agreement with Virgin Galactic proposes.

Yet that might not actually be the most important consideration. Space tourism is the hook for Virgin Galactic right now, but as it develops the technology necessary to make regularly scheduled spaceflight possible, the company will inevitably find other applications for its discoveries. It might well turn out that the revenue that Virgin Galactic gets from its paying passengers is just a small part of its overall sales, especially if companies in the aerospace and transportation sectors end up licensing intellectual property that Virgin Galactic develops along the way.

For now, Virgin Galactic investors are pleased to see NASA signing up for a more extensive collaboration with the company. Where it goes will play a huge role in defining Virgin Galactic's long-term future -- and how successful it will be in transforming the travel industry both in space tourism and beyond.