Please ensure Javascript is enabled for purposes of website accessibility
Log In Help Join The Motley Fool
Free Article Join Over 1 Million Premium Members And Get More In-Depth Stock Guidance and Research
By John Bromels – Jun 23, 2020 at 7:24AM

The "mad genius" was one of history's great underdogs, like the electric car.

Two of the hottest names in electric vehicle stocks are truckmaker Nikola (NKLA -4.32%), shares of which are up more than 200% over the past month, and carmaker Tesla (TSLA -1.11%), whose stock recently crossed the $1,000/share threshold. These companies share something besides a sector, though: They also share a namesake.

Both are named after turn-of-the-century Serbian-American inventor and physicist Nikola Tesla (1856-1943). But... why?

Here's the real reason these two companies have chosen the same obscure scientist as their namesake, and what Tesla's life story can tell investors about these companies. 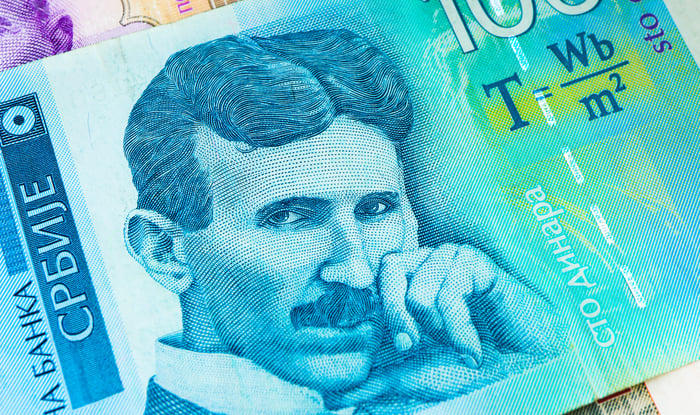 Tesla briefly worked for the legendary Thomas Edison, who was a proponent of DC current, but the two had a falling out. So Tesla partnered with Edison's rival George Westinghouse to develop AC current, sparking (no pun intended) the "current wars." Eventually, the superior AC current won out, and is now the standard form of electricity that powers U.S. homes and businesses (and electric vehicles).

Tesla was eccentric, to put it mildly. He made bizarre claims, including that he had built a "death ray" that could destroy airplanes from 250 miles away, and that he could communicate with New York City pigeons.

Although Tesla had made plenty of money through his partnership with Westinghouse, he got into financial trouble when funding ran out for some of his major projects, like a giant wireless communications tower on Long Island. Although famous, he died penniless in 1943.

What's in a name

Fast forward 60 years and engineer Martin Eberhard is trying to come up with a name for his electric car company. Up until that point, electric cars had almost all been glorified golf carts, but Eberhard envisioned a true performance automobile that would change how people viewed electric cars. So he didn't want the name to sound too "green."

He'd been pitching ideas to his then-girlfriend (now wife) Carolyn for months, but she hadn't liked any of them until he proposed the name "Tesla Motors" in honor of Nikola Tesla. She reportedly replied, "Perfect! Now get to work making your car."

Eberhard's co-founder Marc Tarpenning liked the name (current CEO Elon Musk hadn't yet joined the company) and secured the domain teslamotors.com in 2003. An early version of that website explained the name choice thusly: "Without Tesla's vision and brilliance, our car wouldn't be possible." In a 2018 interview, Musk recalled that he and the founders discovered that the name "Tesla Motors" had already been trademarked in the U.S.; they bought the rights in 2004 for $75,000.

Nikola's founder Trevor Milton named his company after Nikola Tesla too, but the choice seems less to honor the electricity pioneer and more to piggyback on the name of the already-successful Tesla Motors. Interestingly, Milton's previous ventures ended similarly to some of Nikola Tesla's.

Milton founded Nikola in 2014 after departing natural gas storage technology company dHybrid Systems. He says that an investor was stealing dHybrid's intellectual property, much as some of Tesla's patents were infringed upon by Guglielmo Marconi and others. Milton's previous venture, an e-commerce company called Upillar, saw early success but shut down when funding dried up, much like Tesla's unfinished communications tower.

And, of course, both Milton and Musk have raised eyebrows with some of their more provocative statements. Luckily, neither is claiming they can talk to pigeons... at least, not yet.

The life of Nikola Tesla is a cautionary tale for investors considering buying into the two companies that bear his name. The inventor ended up ruined when his big promises couldn't be fulfilled with the funding he'd secured.

Tesla Motors has also struggled to meet its lofty promises, particularly in terms of deadlines and profitability. Despite that, investors were more than willing to throw ever-increasing amounts of cash at Musk & Co. If Nikola Tesla had only been so lucky, his story might have ended very differently.

Right now, Nikola is also making lofty plans for fuel cell-powered semi trucks and pickups, plus a national filling station network for its vehicles. But the company hasn't built a single truck, nor made a dime of revenue. Whether investors are willing to stick with Nikola over the long term will determine whether it ends up like Tesla the man, or Tesla the company. If you buy in, you'll want to monitor Nikola closely.