Please ensure Javascript is enabled for purposes of website accessibility
Log In Help Join The Motley Fool
Free Article Join Over 1 Million Premium Members And Get More In-Depth Stock Guidance and Research
By James Brumley – Jun 27, 2020 at 5:00AM

Retailers are increasingly taking clearance and closeouts into their own hands, with the old ways not working as well.

At a quick glance, the news seems dismissible ... a courtesy notification. Lots of retailers are now thinking creatively to get rid of unsold merchandise that no longer deserves floor space at mainstream stores.

There's much more to the development than the creation of a place to funnel tough-to-sell items, though. These stores are an ideal channel to quickly get rid of aging goods without simply passing them off to an off-price chain for pennies on the dollar. Through this approach, Dick's enjoys far more control of its clearance and close-out goods.

The question is: How many more stores like this are needed? 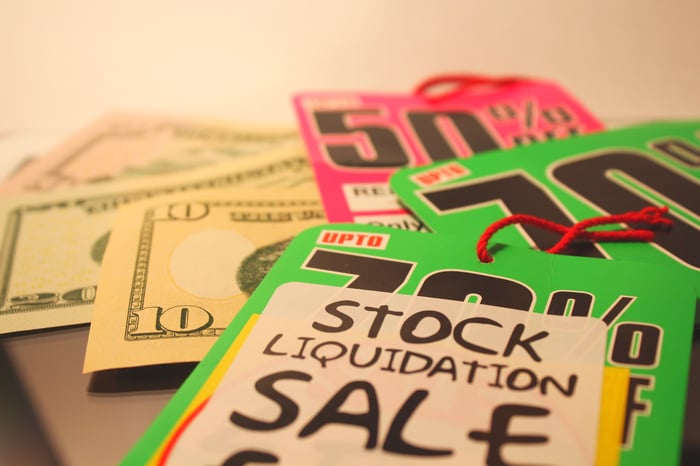 There was a time not too long ago when retailers had plenty of options for getting rid of less-than-prime merchandise. Off-price names like TJX or Burlington Stores would gladly accept goods a conventional store couldn't sell itself -- for a fraction of their original wholesale cost -- while wholesalers were a little more willing to accept and then redistribute returns of unsold goods. Liquidation specialists can still tackle the toughest jobs retailers just want to wash their hands of.

As is so often the case, though, overly optimistic assumptions led to oversaturation. Most U.S. consumers now have easy access to an off-price store like Burlington or T.J. Maxx. The advent of the internet has made it easy to buy and sell pallets of merchandise unsold by mainstream stores, which is usually then sold at smaller, more independent venues.

In short, it's not as easy as it used to be to get rid of old stock. It's a backdrop now forcing companies like Nordstrom and Macy's to take such matters into their own hands. Some are doing it better than others, while some are miles ahead of their peers.

It's probably right, given its burgeoning inventory levels. Just bear in mind that no approach is perfect.

The global COVID-19 outbreak and the subsequent shutdown of stores has wreaked havoc on retailers. Most had their new spring merchandise on hand, and were starting to receive summer goods. Some orders could be canceled, and others couldn't. The end result is a stockpile of inventory that stores don't actually want. 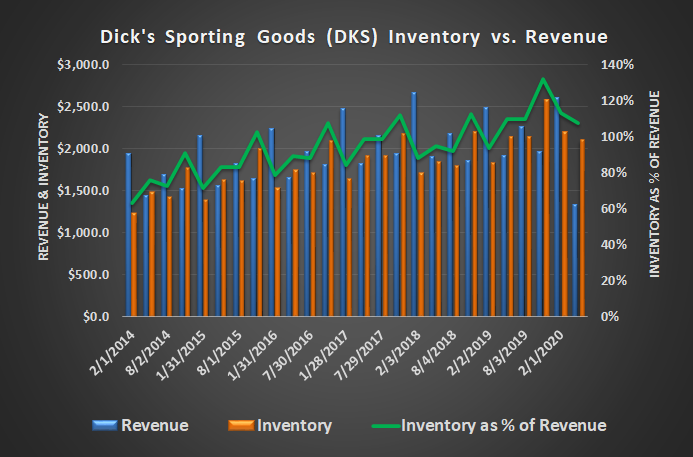 In the same vein, the sheer number of days it takes to sell the average item out of a Dick's Sporting Goods store has grown to concerning levels since 2017. Conversely, turnover -- or the speed at which inventory is being sold -- is slowing. 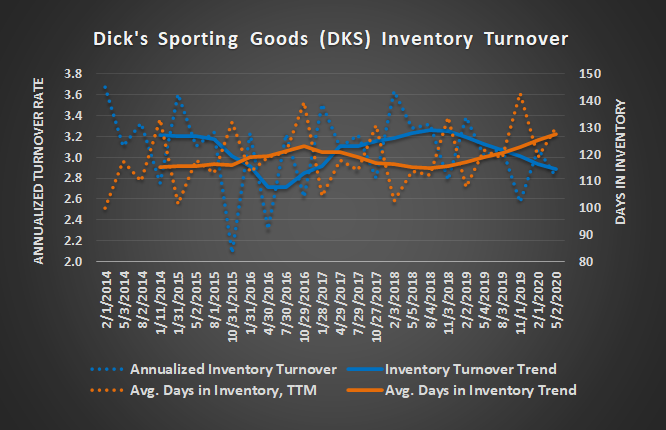 It's all a subtle indication of just how competitive retailing has become, and it's not just Dick's. Most retailers must keep a growing selection available for immediate purchase by consumers who have more and more options.

It matters for a couple of key reasons. The lesser of the two is that unsellable inventory takes up floor space that could otherwise be occupied by more marketable goods. The more pressing impasse is that unsold inventory represents money that could otherwise be used to procure fresher goods. Investors don't often hear the term, but a retailer's buyers keep close tabs on a metric called "open to buy," which simply indicates the amount of cash available to spend on newer merchandise. Dick's open-to-buy allocations are slowly shrinking, ultimately crimping higher-margin revenue.

It remains to be seen if the in-house solution will work for Dick's, although it's difficult to imagine it wouldn't help just a little. 11 outlet stores isn't the end, but it's a respectable beginning. Other retailers should follow suit, and many have. The aforementioned Macy's now operates several Backstage stores or shops attached to its conventional stores -- and six freestanding ones -- as a means of extracting more value from merchandise that didn't sell at full price its first go-around. Though it ultimately failed, Kohl's gave a home-grown off-price venue a shot as well.

As an indication of just how far a retailer might need to go to ensure it never has to crowd its full-price, first run stores with distracting, aging merchandise, one should look at Nordstrom. Most investors know its flagship and namesake stores, as well as its off-price Rack arm. What most investors may not realize is that, of Nordstrom's 354 stores, only about 100 of them are conventional Nordstroms. There are 247 Racks, plus two additional clearance centers.

That's not to suggest that Dick's or any other retailer has to operate more than twice as many off-price venues as mainstream, full-price stores to adequately keep older inventory out of the way. It's worth noting, though, that Nordstrom has been able to sidestep most of the inventory and open-to-buy headaches that have plagued other retailers of late.