News of a fresh round of 737 MAX cancellations hits the stocks and fuels a selloff.

Shares of Boeing (BA 4.34%) traded down 6% on Tuesday morning after the company reportedly lost a couple of large orders for its 737 MAX plane. Some of Boeing's major suppliers were doing even worse, with shares of Triumph Group (TGI 6.19%) and Spirit AeroSystems (SPR 4.37%) down 8% apiece as of 11:30 a.m. EDT.

Commercial aerospace has been hit hard by the COVID-19 pandemic, with airlines responding to falling demand by grounding planes and slowing new deliveries. But for Boeing and its suppliers, the issues started well before the pandemic. Boeing's 737 MAX has been grounded since March 2019 after a pair of fatal accidents. 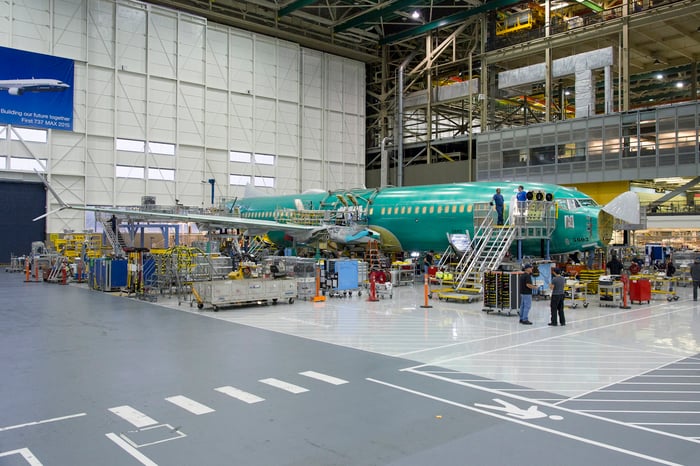 The 737 MAX remains problematic and is providing an excuse for some of Boeing's customers to pull out of future plane purchasing commitments. On Tuesday, Norwegian Air reportedly canceled an order for 92 Boeing 737 MAX planes and said it would sue Boeing, demanding compensation for issues surrounding the jets.

The cancellations are just a small part of Boeing's 4,000-plus frame order book, but they continue a negative trend that has caused Boeing to report negative net orders in recent months.

Boeing is making progress getting the 737 MAX recertified, but even when the plane is allowed to fly again, the cancellations are a reminder there is likely to be tepid demand for the foreseeable future.

Boeing manufactured about 400 737 MAX planes during the grounding and will likely struggle to clear that inventory off of its lots even when the plane is cleared for commercial use. Boeing has already warned Spirit to bring down 2020 production goals, and further actions could be necessary.

Boeing bled through $4.7 billion in the first quarter, in part due to the 737 MAX, and the company desperately needs to make deliveries on the plane to boost cash flow. Given its glut of inventory and the continued steady stream of cancellations, Boeing is likely to remain conservative on production rates through 2021 and perhaps beyond.

That's bad news for the 737 MAX, a plane that at launch was expected to be one of the best-selling commercial jets of all time. Boeing will likely make and sell the plane for years to come, but the payoff for the aerospace giant and its supply chain might never reach levels once anticipated.