Please ensure Javascript is enabled for purposes of website accessibility
Log In Help Join The Motley Fool
Free Article Join Over 1 Million Premium Members And Get More In-Depth Stock Guidance and Research
By Andrew Tseng - Jul 2, 2020 at 6:49AM

You haven't missed these three stocks yet.

Shares of Zillow Group tanked during the early COVID-19 panic. The market feared the real estate industry would grind to a halt due to social distancing and the possibility of tighter lending standards. The stock fell from a pre-pandemic price of about $66 per share on Feb. 21 all the way to below $24 per share on March 18 -- an incredible 64% drop in only about one month.

Investors were fearful that revenue in the company's core Premier Agent business could plummet if agents stopped paying for the company's homebuyer leads. Further, Zillow might have been stuck with the 2,707 homes worth $837 million that it owned at year-end as part of its Zillow Offers iBuying business. 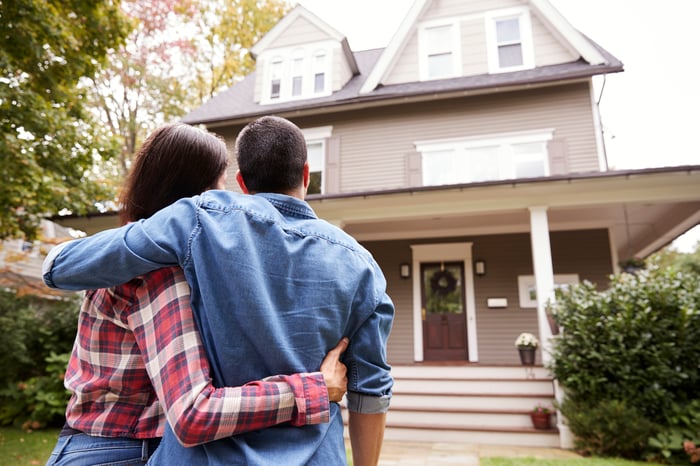 Fear began to give way to hope after the company's management team reassured investors during a March 23 conference call that the company had more than enough liquidity to handle even an incredibly stressed downside scenario. The company's better-than-expected first-quarter earnings report on May 7 further relieved the market, causing the stock price to grind higher. The stock now trades near $57 per share, well over double its March low price.

But there's substantial further upside over the long term if Zillow's management team can execute its vision for what it calls "real estate 2.0." This includes providing liquidity to homeowners who feel stuck by offering to buy their homes through Zillow Offers. The program entails selling homes by running virtual tours and seamlessly providing mortgages, title insurance, moving, renovation, and other services to buyers as part of the transaction.

Zillow is addressing an absolutely massive market. Last year, the U.S. residential real estate market was worth $1.9 trillion of transaction value. If Zillow can even remotely deliver on its long-term vision, the shares should fare extremely well over time.

But the stock has now come roaring back to $120 per share as of this writing. The rally is due to the company's issuance of $600 million of new equity, including $25 million each to both the founder/CEO and the largest shareholder. It's also due to the quick turnaround in the company's retail car sales, which fell about 30% year over year at their worst point in early April but later rebounded to 20% to 30% year-over-year growth rates. Carvana appears to be gaining market share as a result of its entirely online car shopping experience and contactless delivery.

Despite the stock's massive rebound -- appreciating over fourfold in just over two months -- it still appears to have plenty of room to run over the long term. The company's unique online selling model and nationwide delivery capabilities provide customers with an experience, convenience, and price that traditional used car dealers can't match. The convenience of delivering the car straight to customers' doors without ever having to physically interact with anyone, while also seeing far greater selection and lower prices, is hard to beat.

Carvana has grown rapidly since it launched in 2013 and is now the country's third-largest seller of used cars. Given the superior business model at scale, the company should become the used car leader in due course. If so, the stock has plenty of additional upside in the years ahead.

In early March, shares of Spotify traded as high as $148 per share before tanking 21% in 11 days to bottom at $118 per share. There were concerns that largely housebound users would cause declining engagement and therefore headwinds on Premium subscriber growth.

But these fears proved short-lived when Spotify reported its first-quarter results on April 29. The company reported 31% growth in both monthly active users (MAUs) and Premium subscribers, which was actually a slight acceleration from recent growth rates. Premium subscriber churn, or cancellations, saw essentially no impact from COVID-19, ticking up slightly from the fourth quarter but improving by a meaningful 0.7% year over year. An incredible 70% of those who do churn are back with Spotify within 45 days. These results sent the shares up to $156 per share.

Since then, Spotify has announced a string of original podcasting deals. On May 19, Spotify announced it had signed Joe Rogan's Joe Rogan Experience podcast to a multiyear exclusive deal reported to be worth more than $100 million. On June 17 and 18, news broke that the company had signed Kim Kardashian and the AT&T-owned DC Comics universe, respectively, to exclusive podcast deals. The market's realization of what these sorts of deals could mean for the ecosystem and future profits have pushed the stock to $265 per share as of this writing. That's well over a double in just over three months.

There should be plenty of further share price appreciation in the years ahead as the company continues to grow its user and subscriber bases. The scale and market power that should come with hundreds of millions, if not one billion or more, future users should make the company far more profitable than it is today.

These three stocks are just getting started and investors should take note.