Cable TV customers all over the world are cutting the cord. That's nothing new. But one of the biggest names prompting cable cancellations isn't the one you might expect. It's YouTube, which operates under Google, Alphabet's (NASDAQ:GOOGL) (NASDAQ:GOOG) breadwinner.

Surprised? One might've thought a more dedicated name like Dish Network's (NASDAQ:DISH) skinny bundle Sling TV or Walt Disney's (NYSE:DIS) Hulu + Live TV would drive most of the defections. To be fair, both brands are doing OK.

But it's YouTube's not-so-secret weapon that's nagging at conventional cable the most. 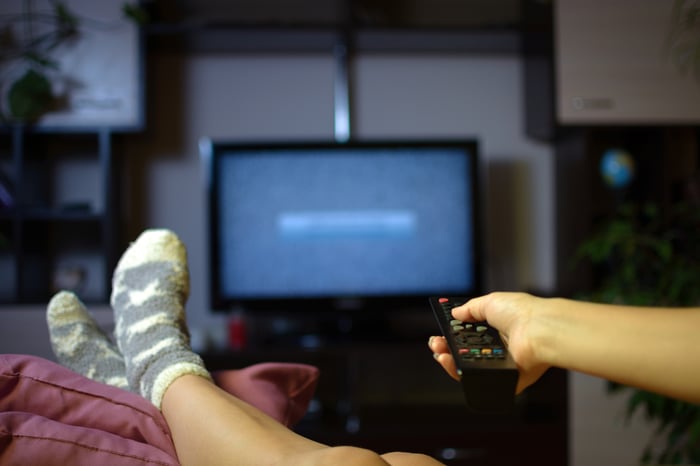 Winning the battle for your living room

YouTube is one of the web's top destinations. Web traffic ranking site Alexa.com says the video-sharing service is the world's second-most engaging site. Visitors spend an average of about 14 minutes per day getting their digital video fix.

Here's the interesting part: They're not necessarily watching all those videos on a tablet, smartphone, or computer. Google wrote in a blog post last week that over 100 million people in the U.S. alone regularly watch YouTube videos on their televisions. Citing Comscore data, Google further said that YouTube's content comprises a little more than 40% of the country's total time spent watching any ad-supported video entertainment.

Let that sink in. YouTube, which wasn't really meant to be an alternative to cable TV, is proving to be just that.

The data fits with another recent nugget from set-top receiver company TiVo, owned by Xperi (NASDAQ:XPER). In its newest Video Trends report, TiVo determined that YouTube and Netflix (NASDAQ:NFLX) -- and only YouTube and Netflix -- were the most popular ways that traditional cable customers augmented their existing cable service. The survey also noted that among consumers who didn't subscribe to conventional cable but did have broadband, YouTube, Netflix, and Amazon.com's (NASDAQ:AMZN) Prime were the most popular piecemeal alternatives to conventional cable media.

YouTube featured prominently in most of the potential combinations of television services.

Neither TiVo nor Google answered the big question: How many fans of the ad-supported version of YouTube are paying for YouTube TV, Google's live-streaming television product? Nobody outside of Google knows the exact number. CEO Sundar Pichai only indicated that there were more than 2 million paying live TV customers as of the end of last year.

Research outfit MoffettNathanson was willing to venture a guess after the first quarter ended, estimating that the figure grew to 2.3 million as of March. Google and Hulu were the only two (of the big four) live-streaming options MoffettNathanson's analysts believe made customer gains. Sling TV and AT&T's (NYSE:T) TV Now lost subscribers.

Some of YouTube TV's paying customers might have found YouTube's live-streaming option while searching for cable alternatives. But it's also possible that some customers found YouTube TV because they were already watching YouTube videos on their television regularly. We may not know exactly how many of those 2.3 million subscribers came from each of those two funnels. But we do know that no other video venue is drawing over 100 million people to any particular TV-based platform in any given month. The handoff from free, ad-supported entertainment to a paid subscription seems to be a fairly fluid one for YouTube.

We're still in the early stages of the shift from linear cable to streaming cable. There's still time for newcomers or the old guard -- Comcast (NASDAQ:CMCSA), Charter (NASDAQ:CHTR), or, more plausibly, Amazon -- to find a profitable way to stop ceding customers to YouTube TV and other live television services.

Still, YouTube TV appears to be pulling ahead of the pack. The only noteworthy distinction between it and its rivals is its ownership of the world's most popular, free-to-use, ad-supported video repository. But that seems to make all the difference, and it appears unlikely that another player is going to be able to catch up with YouTube now.