Alphabet's (NASDAQ:GOOG) (NASDAQ:GOOGL) Google recently agreed to buy North, a Canadian start-up that produces smart glasses. Google didn't disclose the size of the deal, but The Globe and Mail pegs the value at around $180 million.

North's Focal smart glasses look more like regular glasses than the original Google Glass, which had a protruding camera. However, a limited number of apps, a cumbersome fitting process, and a lofty launch price of $1,000 (cut to $600 just weeks later) all doomed the North device.

Last December, North discontinued Focals 1.0 and announced the development of Focals 2.0 to address the original device's shortcomings. However, the company recently announced it will no longer ship Focals 2.0, and its team will join Google to advance its "hardware efforts and ambient computing future."

Does this acquisition indicate Google is circling back to the consumer smart glasses market after the failure of Google Glass?

What are Google's plans for the augmented reality market?

Google launched Glass for developers in 2013 before selling it to mainstream consumers the following year. However, the closely watched smart glasses flopped for three reasons: they were prohibitively expensive at $1,500, they were socially awkward, and the camera sparked serious privacy concerns.

In early 2015, Google discontinued the original Google Glass. In 2017, it launched the Google Glass Enterprise Edition, which paired beefier hardware with software tools for specific industries. It launched a second version last year.

Google also launched an augmented reality (AR) development platform called Project Tango back in 2014. However, Tango didn't attract enough developers, mainly due to the high 3D-mapping hardware requirements, so Google killed it off in 2017 and replaced it with the mobile-friendly ARCore platform.

The enterprise market and "ambient computing"

Google's takeover of North is generating fresh buzz regarding a new consumer-facing version of Google Glass, but its decision to discontinue Focals indicates it will remain focused on the enterprise market. 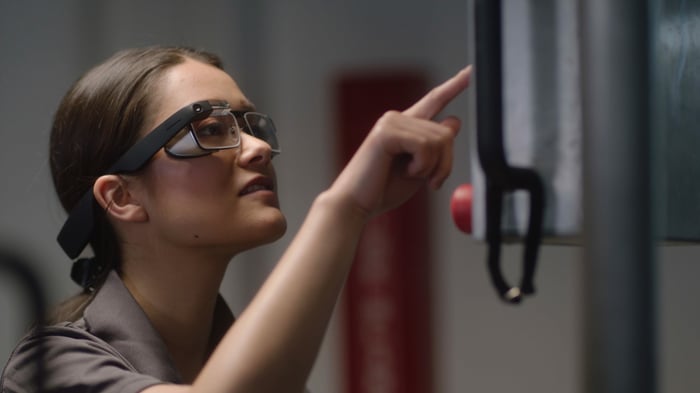 Last year, Google Glass chief Jay Kothari told Gizmodo the company remained focused on selling enterprise smart glasses instead of consumer ones. But during the "Made by Google" conference later that year, Google expressed interest in expanding its "ambient computing" market, where all devices -- including phones, smart home devices, wearables, and other Internet of Things gadgets -- seamlessly fade into the background.

Google's pending takeover of Fitbit could expand its reach into that market, which already includes its Home speakers, Chromecast devices, and Android Auto. And consumer-facing smart glasses could complement that expansion. Therefore, Google's takeover of North might help it grasp how to properly relaunch Glass for mainstream consumers.

North was also developing Myo, a gesture control armband that can read a user's movements through electrical signals and convert them to actions in AR and virtual reality (VR) environments. Facebook (NASDAQ:FB) also acquired similar technology via its acquisition of CTRL-labs last year.

Gearing up for the next big ecosystem battle

Facebook's takeover of CTRL-labs complemented its Oculus VR headsets, its Portal smart screens, and its upcoming AR headsets, all of which could expand a world of "ambient computing" beyond PCs and mobile devices.

Apple (NASDAQ:AAPL) is also expanding into the AR and VR markets with a growing list of acquisitions, and the tech giant could reportedly launch a pair of consumer-facing AR glasses within the next three years. Microsoft (NASDAQ:MSFT) also continues to promote its HoloLens AR headset to enterprise customers.

It would be foolish for Google to sit out of this growing market, but it would also be reckless to jump back in too quickly. The market is filled with overly ambitious companies like Intel (NASDAQ:INTC), which gave up on smart glasses in 2018; Bose, which recently shuttered its entire AR division; and Magic Leap, which pivoted toward the enterprise market after its widely hyped consumer-facing headset failed to gain steam.

Google's acquisition of North indicates it's still interested in the AR market, but it won't launch a new pair of consumer-facing smart glasses anytime soon. Instead, investors should simply view the acquisition (which will barely dent Google's $19.6 billion in cash and equivalents) as another brick in its "ambient computing" wall, which could strengthen its defenses against Facebook, Apple, Microsoft, and other tech giants.