Please ensure Javascript is enabled for purposes of website accessibility
Log In Help Join The Motley Fool
Free Article Join Over 1 Million Premium Members And Get More In-Depth Stock Guidance and Research
By Rich Duprey – Jul 4, 2020 at 11:35AM

The ailing retailers might learn something from the athleisure wear company's deep dive into home fitness.

lululemon athletica's (LULU -4.28%) acquisition of MIRROR is a really smart move, as it extends its brand in a natural way that helps it move far beyond just clothes it sells in stores.

Yet the purchase also shines a light on a path that similarly-situated retailers looking for a growth catalyst could follow. Both Gap (GPS -4.40%), which owns the popular athleisure brand Athleta, and Dick's Sporting Goods (DKS -1.94%), whose private label Calia brand has gained some traction, might want to take notice. 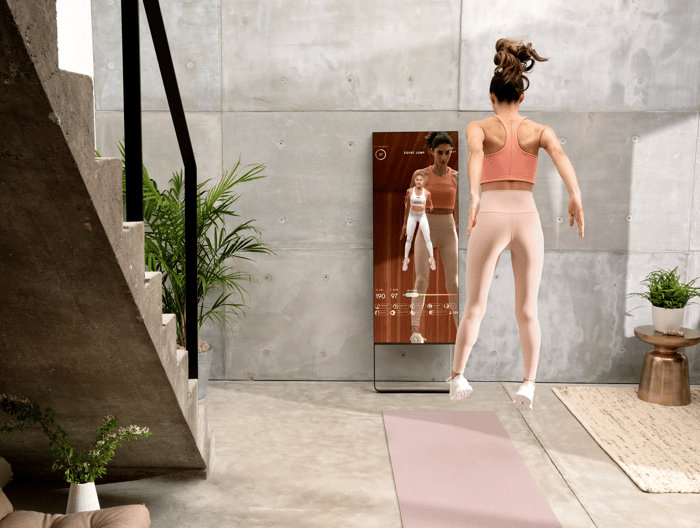 Lululemon has seen itself as more than just an athleisure wear clothing company for some time now, but especially since CEO Calvin MacDonald took over the company in 2018. He has expanded Lululemon's vision, sometimes in ways that seem only ancillary to its core mission, such as personal care products like creams, lotions, and balms; and in other ways that are more in line with it, like the store it opened in Chicago last year where customers can work out, meditate, or even eat at the on-premise restaurant.

The MIRROR acquisition is fully in that vein, as it stretches Lululemon's potential in an organic direction.

The tech-enabled fitness device maker lets Lululemon capitalize to an even greater degree on the burgeoning home fitness trend and what it likes to call the "physical sweat space." MIRROR's mirrors contain cameras and microphones that allow users to obtain a gym-like experience by participating in live fitness classes, but in the comfort of the home.

The coronavirus pandemic drove thousands of people out of gyms and into their living rooms. It has helped Peloton Interactive achieve massive success, even though the equipment that used to be required -- a connected treadmill or stationary bicycle -- might otherwise be seen as prohibitively expensive.

With standalone subscriptions to Peloton and now Nautilus (which is also offering connected fitness classes), consumers wanting to work out at home can do so easily. Peloton, in fact, just released its app on Roku so users can participate in classes using their streaming device.

While MIRROR classes still require a pricey connected mirror (they sell for just under $1,500), the acquisition provides an opportunity to generate more revenue from subscriptions -- $39 per month with a one-year commitment requirement, with personal training classes available for an additional $40 per month -- and co-branding potential through Lululemon's loyalty program. It's a nice fit between the customer base of the apparel company and the technology company, and it wouldn't be a surprise if there was an overlap.

Both Gap and Dick's Sporting Goods should consider the opportunity of expanding their own clothing brands into such a vertical to similarly expand their brands.

Athleta has been a standout brand since Gap acquired it in 2009. Last year, it was the only one of Gap's major brands to post positive comparable store sales, as revenue rose to nearly $1 billion.

Its bid to cross that threshold in 2020 was likely knocked back by the COVID-19 outbreak. In the first quarter, sales fell to $205 million from $223 million last year, but with stores reopening, it may be able to find its footing again.

Dick's has similarly gained traction with Calia, its women's athletic brand that has already become the second-largest women's brand sold in its stores, behind Nike. Its discount line, DSG, has become its largest private apparel label.

These retailers' athletic brands could be further boosted through partnerships with connected fitness companies, whether the retailers buy them outright or just invest in them as Lululemon first did with MIRROR. While Peloton or Nautilus might not want to align themselves with a retailer, plenty of start-ups in the space such as Tempo and Tonal might find such an arrangement advantageous.

The future of fitness

Lululemon as a first mover in this field will undoubtedly be a leader that contributes its own strengths to add to the existing capabilities of MIRROR.

Yet Gap and Dick's Sporting Goods equally have a chance to tap into this growing market. Collaborative efforts could even be seen as a requirement in a post-pandemic market where many beaten-down retailers will just be looking to survive.

Rich Duprey has no position in any of the stocks mentioned. The Motley Fool owns shares of and recommends Lululemon Athletica, Nike, Peloton Interactive, and Roku. The Motley Fool has a disclosure policy.