Imagine spending over $125,000 on a single item, more than twice your hypothetical $55,000 annual income. Spending that much suggests you'd want it too much to be willing to part with it just a few years later at what could potentially be a discounted price. And yet that's what Under Armour (NYSE:UAA)(NYSE:UA) is reportedly doing with MyFitnessPal.

The technology news site The Information is reporting this week that Under Armour wants to offload MyFitnessPal, an app it paid $475 million to acquire in 2015. For perspective, Under Armour's net income was $208 million in 2014.

Whatever Under Armour's reason is for making this transaction, it probably isn't good news for shareholders. 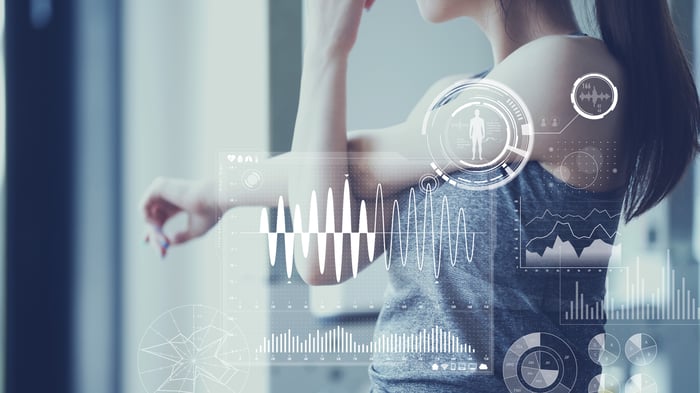 Look around the fitness world

In June, athletic apparel company lululemon athletica (NASDAQ:LULU) acquired Mirror for $500 million. Mirror sells a connected-fitness hardware product, enabling an ongoing subscription to home-workout content. It only launched in September of 2018, but it is already on pace for $100 million in 2020 revenue.

It's a clear demonstration of a profound consumer trend: connected fitness. These days it's not enough to secure the one-time sale of a physical product. Companies are looking to provide ongoing services with their merchandise.

Look around the fitness world, and you'll see Lululemon isn't alone. For example, Peloton breathed new life into stale ideas (exercise bikes and treadmills) by offering studio-quality workouts and a gamified experience. For this service, it charges a $39 monthly fee, more than the cost of some gyms.

The connected-fitness trend is undeniable, and MyFitnessPal was one way Under Armour could participate in it. 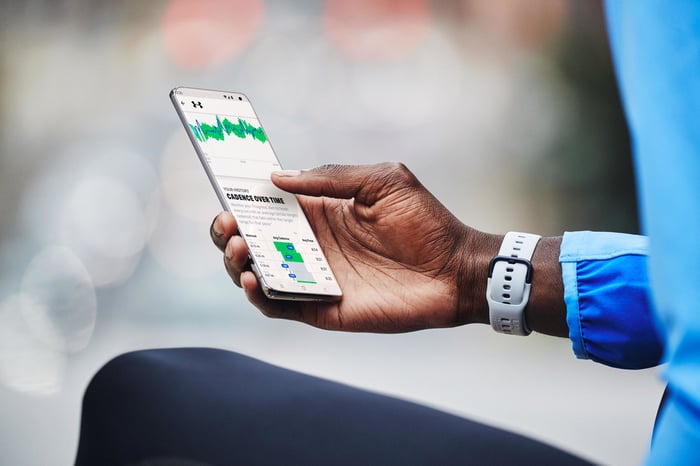 Under Armour's digital side

Under Armour was ahead of this trend. From late 2013 to early 2015, it spent a whopping $710 million acquiring just three apps: MapMyFitness, Endomondo, and MyFitnessPal. While this trio's price tag was questionable, it was an insightful early move in the correct direction.

Under Armour's digital business also played an important role in its turnaround plans. At its 2018 investor day, management said: "Another key channel for us is our connected fitness community, MyFitnessPal, MapMyFitness, [which] gives us access to millions of focused performers daily. It is our own walled garden."

This "walled garden" created a complementary system for Under Armour. Digital products promote the use of Under Armour's clothing, and clothing inspires consumers to work out via the apps. It's the kind of synergy Lululemon is hoping to create with Mirror. And it's what Under Armour shareholders expected.

To be clear, Under Armour's digital business is excelling during the COVID-19 pandemic. MapMyRun was a rare bright spot in the company's first quarter. In the Q1 earnings call, management noted a 275% increase in new users just since March. And its connected footwear business is benefiting, with year-over-year workouts up over 200% since mid-March.

So why sell MyFitnessPal?

The sale of MyFitnessPal is still an unconfirmed rumor, which doesn't shed light on Under Armour's motivation. But if true, it's hard to put a positive spin on it.

Perhaps MyFitnessPal is performing well, benefiting from current consumer trends. If sold, it's because it doesn't figure into the Under Armour's plans anymore; the company believes it can profit from it more now than over the long haul. But this might indicate a shift back to being just an apparel company, which isn't the direction the rest of the fitness world is headed in.

Or perhaps MyFitnessPal is failing. In that case, Under Armour won't likely get a good price for it, and surely nothing approaching what it spent. It would be disappointing to see the app performing poorly while so many other fitness apps are surging.

The most likely scenario is that MyFitnessPal is doing fine and Under Armour likes it, but the company needs the cash. As the chart below shows, since it acquired MyFitnessPal, revenue and net income have stalled and profitability has been more volatile and then the pandemic hit and everything took a significant drop. 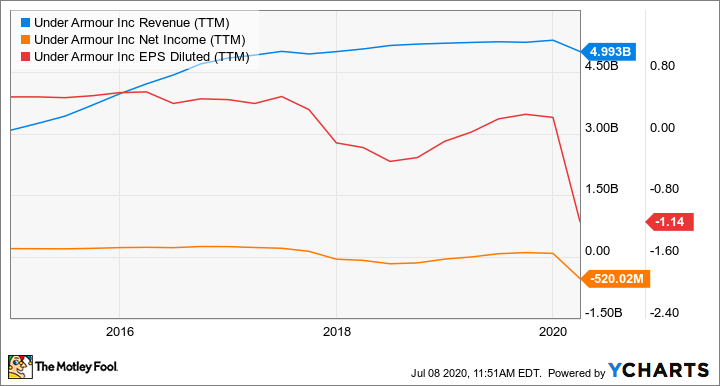 Right now, Under Armour is showing the signs of a distressed company. It's currently trying to reduce 2020 operating expenses by $325 million. And it's attempting to cancel its $280 million sponsorship of UCLA sports teams, which could be a sign of things to come.

Under Armour had been attempting a comeback, which wasn't a great place to be entering a pandemic. It already needed to improve its financial situation, but the widespread drop in spending for clothing retail could have placed the company in a cash crunch. That would explain the need to offload an asset like MyFitnessPal. The money will help in the short term, but it's hard to imagine it makes the company better in the long term.