Please ensure Javascript is enabled for purposes of website accessibility
Log In Help Join The Motley Fool
Free Article Join Over 1 Million Premium Members And Get More In-Depth Stock Guidance and Research
By Billy Duberstein – Jul 19, 2020 at 7:30AM

Don’t blink: You could miss how fast these companies are moving.

In today's low-interest-rate, technology-disruption-based economy, growth stocks have been the flavor of the decade. In fact, growth stocks are currently outperforming value stocks by some of the widest margins since the dot-com bubble, and they've been outperforming for an unprecedented amount of time.

However, unlike the dot-com bubble, these new tech darlings have legitimate revenue and profit growth, suggesting they're more the real deal than not. So, when looking for the next multibagger stock, it's a good idea to keep tabs on those companies growing the very fastest, as the fastest-growers have the best shot at justifying their lofty valuations. 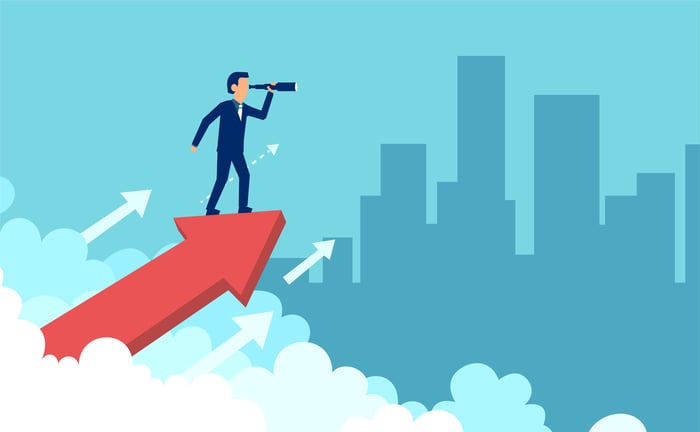 While I had been quite skeptical that Zoom Video Communications could ever justify the valuation investors had assigned it during the pandemic-fueled first quarter, to the company's credit, it posted some truly eye-popping results in early June.

Even though many people can use Zoom free of charge for 40 minutes, the ease and flexibility of Zoom's customer-friendly software and "freemium" business model was enough to spur torrid paid subscription growth as COVID-19 set in.

Zoom's recent quarter ended April 30, so it captured a good amount of the depths of the pandemic outbreak, during which "Zoom" became a verb closely associated with videoconferencing itself. That manifested itself in a massive 169% growth in revenue.

Profits and free cash flow also skyrocketed by many multiples -- adjusted operating income increased from $8.2 million to $54.6 million. Thanks to a lot of new subscriptions that are paid up front, free cash flow rose from $15.3 million to $251.7 million. Customers that pay over $100,000 in trailing 12-month revenue soared a bit less at 90%, but new customers with more than 10 employees grew a truly eye-opening 354%.

Investors should be aware that the stock is undeniably expensive at a 1,452 P/E ratio and a 92 price-to-sales ratio, even including the impact from the recent blockbuster quarter that is likely to be the best in the company's history. That being said, should Zoom execute and covert a lot of these new free or low-paying customers to becoming larger paying customers over time, the company could be in for continued marquee growth in the years ahead.

Lemonade: A spoonful of sugar in an otherwise bland industry

Never heard of Lemonade (LMND -2.19%)? That may be because this would-be insurance industry disruptor just had its initial public offering on July 2 -- and oh, what an IPO it was. Priced at $29, Lemonade's stock soared as much as 144% on its first day of trading, and it has continued climbing. Currently around $85.86 per share, Lemonade's market capitalization is $4.7 billion -- a whopping 36.2 times trailing sales.

The enthusiasm for Lemonade's new stock could be due to how fast its revenue is growing. In the quarter ended March 31, Lemonade's revenue was up a whopping 138% year-over-year, from $11 million to $26.2 million.

"What's so special about insurance?" you might ask, and you would be right to do so. The insurance industry is notoriously volatile, as insurers take in premiums that they attempt to line up with payout liabilities that can fluctuate year to year. Reflecting this ongoing risk, traditional insurance companies thus trade at low multiples.

So how is lemonade getting a software-like multiple? Well, Lemonade is attempting to do something a bit different, aiming its business model to more closely mirror that of a subscription-based software company. First, to tamp down the volatility associated with being an insurer, the company lays off much of its risk to reinsurers, which covers the downside. Interestingly, the company also seeks to limit its upside, promoting a unique "giveback" feature, in which it will donate "leftover money" (whatever that is) to causes that customers pick from a pre-vetted list of charities.

The result is that Lemonade is basically attempting to make its business more like a fee-earning, recurring revenue business with little change in its gross margin year to year. Thus, garnering loyal customers and volume growth will be pillars of its business. At the time of its IPO, Lemonade only provided renters and homeowners insurance, but it expanded into health insurance for cats and dogs last week, and the company is looking to offer more insurance products over time.

Lemonade thinks it can quickly become a leading insurance customer favorite, especially with younger adults. The prospectus points to its technology stack as being drawn from the ground up for the modern age, whereas incumbents may have older, more manual systems. Lemonade provides an easy-to-use, lightning-fast digital platform powered by artificial intelligence, with the company's custom claims processing bot, "AI Jim," paying claims in as little as three seconds.

The combination of an intuitive digital experience to streamline an unpleasant task of getting insurance, the unique "give-back" pledge, and other millennial-targeted features aims Lemonade squarely at a younger demographic who might be buying insurance for the first time in small policy amounts. Lemonade's idea is to incubate loyal customers who will stay with the company as they age and move on to larger apartments, houses, and condos, and buy more products over the coming decades.

There's still a lot of open questions with Lemonade, including how its underwriting tech will really perform over time, or if its business model can be easily replicated. The company is also losing lots of money, with a $36.5 million loss in the first quarter -- over 100% of its revenue. That being said, while losses have grown over the last few years, Lemonade's underwriting on a per policy basis has actually improved, with the company's gross loss ratios (gross losses divided by premiums) improving from 161% in 2017 to 79% in 2019.

While still very new and unproven, Lemonade's aim to reshape the $5 trillion global insurance business has excited investors, and there's admittedly a lot of potential there.

Finally, the "slowest" of the my three top high-growth stocks is IT monitoring software stock Datadog (DDOG -1.00%), with its revenue growth rate clocking in at "only" 87% last quarter. Customers who spent $100,000 or more on an annual revenue basis climbed from 508 to 960 over the past year, and total customers climbed above 11,500. Like Zoom, Datadog is also the rare high-growth software stock that is also turning profitable, with the company expecting $10 million in adjusted operating profits for the current quarter.

Like the preceding companies, Datadog is also newly public, having had its IPO in September of 2019, yet it's actually a 10-year-old company that has built a very powerful platform, with over 400 third-party integrations spanning infrastructure monitoring, cloud monitoring, application monitoring, and log management into a single, unified platform.

Acting as that "glue" between all different kinds of IT assets makes Datadog a preferred go-to for developers and operations personnel, helping companies quickly identify problems in their IT infrastructure and fix them quickly. In today's "always on" digital world in which employees and customers need quick and easy user experiences, Datadog's monitoring chops save organizations lots of time and money. It's therefore no surprise the company continues to rack up high-profile customer wins.

Datadog's stock is also highly priced at a whopping 62.5 times sales, and is up a ridiculous 224% since its IPO less than a year ago; however, with this kind of growth, and importantly, with expanding gross margin up 7 percentage points year-over-year, Datadog's astronomical rise might just be justified.