Please ensure Javascript is enabled for purposes of website accessibility
Log In Help Join The Motley Fool
Free Article Join Over 1 Million Premium Members And Get More In-Depth Stock Guidance and Research
By Nicholas Rossolillo – Jul 20, 2020 at 11:20AM

In just a few months' time, a lot has changed. Many operations that rely on in-person interaction have been rendered redundant, and with digital businesses picking up the slack, it looks increasingly likely the world will never be the same.

It's amid this backdrop that a class of new stocks are making their public debut. Three IPOs from mid July I think are worth watching closely are nCino (NASDAQ: NCNO), GoHealth (GOCO), and Digital Media Solutions (DMS).

Our first subject tripled in its first day of trading. nCino is a software platform that helps typically IT-deprived small- and medium-sized banks and credit unions digitize their operations and replace and/or automate legacy processes. This kind of digital transformation is sweeping the business world, and shelter-in-place orders are making the typical in-person relationship smaller banks used to thrive on especially difficult. It's no wonder then that nCino's IPO was greeted with such gusto.

Adding to the warm reception is that nCino has a similar business model to digital transformation technologist Veeva Systems, which has been getting life science organizations up to speed to great success. Like Veeva, nCino was built using salesforce.com's (CRM) tech platform. Salesforce Ventures -- the company's investment division -- is also one of the primary backers.

I don't think quite the same long-term potential is there for nCino as there has been for Veeva, but it's worth keeping an eye on. The company said its subscription services grew 66% year over year to $34.8 million during the three months ended April 30, 2020, and it reported an adjusted net loss of $4.8 million in that period. As of this writing, nCino has a market cap of $6.6 billion (excluding issuance of more stock in the coming months based on vesting periods and other awards). That means nCino trades for some 37 times revenue at the annualized first-quarter run rate.

It's a rich price tag, and given the stock surged as quickly as it did out the gate, I opted to adopt a wait-and-see strategy with this one. I'm in no rush as Salesforce is a core holding in my portfolio. And as nCino is based on and partially owned by Salesforce, I already have a little indirect exposure to the outfit's success. Nevertheless, I'll be keeping an eye on the fintech firm's progress going forward and may change my mind. 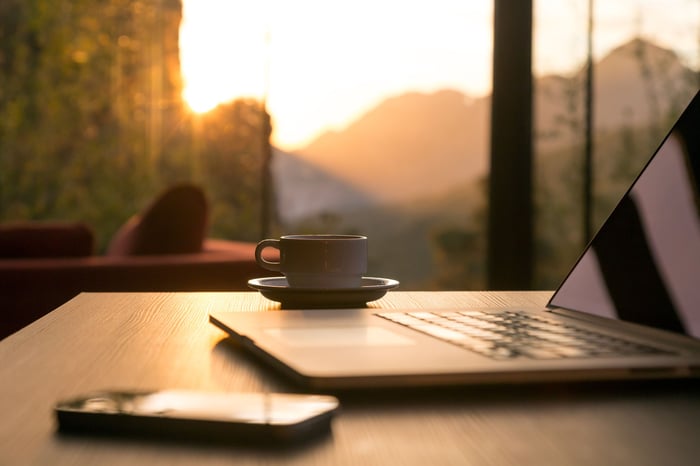 Digitizing the search for insurance

GoHealth is an insurance plan marketplace that helps match customers with the right health and Medicare supplement policy. The company plays in a crowded sandbox, but it's a big sandbox with more than 10,000 people turning 65 in the U.S. every day and the estimated value of Medicare supplement products alone at $28 billion a year.

GoHealth said its 2019 revenue grew 139% to $539.5 million, and that pace continued in the first quarter as the top line more than doubled to $141.0 million in first quarter. Adjusted EBITDA (earnings before interest, tax, depreciation, and amortization) was $35.2 million in the first quarter, making for a robust 25% adjusted EBITDA margin. The current share price values the insurance firm at roughly $6.7 billion, or 11 times trailing 12-month revenue. It may be surprising, then, that the stock is still trading roughly at its IPO price in the days since it made its debut.

That is likely due to a few factors. The company said it expects second quarter revenue to "only" grow 66% year over year at the midpoint of its guidance. That would indicate a sharp slowdown from the recent past. There's also a complex ownership structure that leaves private equity firm Centerbridge Partners with 13% of total voting power and 48% economic interest in GoHealth. Insurance is also a transactional business, and more predictable software-as-a-service revenue models (like nCino) are all the rage these days. All these factors are worth bearing in mind and following closely as GoHealth begins its journey as a publicly-traded stock.

Nevertheless, I think Medicare insurance plans will be a growth industry for quite some time, and GoHealth's technology has helped it garner significant share of the market. I took a very small position (less than 0.5% of my total portfolio, my typical starter entry point for IPO stocks) and will be keen on seeing how things play out for the rest of 2020 before deciding what to do next.

Advertising technology and performance marketing platform Digital Media Solutions just made its debut but via a merger with special purpose acquisition company Leo Holdings (a method employed by a number of other IPOs this year, Nikola Motors being one example).

Unlike some other well-known adtech outfits, DMS is vertically integrated. It builds long-term relationships directly with organizations and uses various technology platforms to advertise and drive customer conversion for its customers.

Believe it or not, digital marketing exceeded the traditional variety for the first time in 2019. That's changing in dramatic fashion amid the lockdown. I recently spoke with DMS founder and CEO Joe Marinucci, and he said his firm is busier than ever. Estimates put U.S. digital ad spend at some $100 billion in 2019, a number that may be ballooning to $150 billion in 2020. More details will emerge as second quarter earnings season gets underway, but one thing is for sure: Digital promotions just got a massive bump that's unlikely to disappear once the dust settles.

Specific financials haven't been revealed yet, but upon completion of the merger, DMS had an enterprise value of $757 million, worth 2.2 times 2020 expected revenue (implying expected revenue of about $340 million this year). Sales are expected to grow at a rate of about 18.6% annually through 2021 and EBITDA at a rate of 21.3% per year. That makes DMS the slowest growing firm on this list but also by far the cheapest. Flying under the radar while other tech names are commanding the spotlight, my interest was piqued so I took a similar position like the one outlined above with GoHealth.

The world is quickly changing, and lots of upstart technology-driven businesses are making the most of the opportunity. While uncertainty and economic turmoil reign, I've been adding small-cap stocks to my portfolio that I think have a good shot of turning into big winners over the next decade. These three recent IPOs may fit the bill and are worth a place on your watch list.