Peloton Interactive (NASDAQ:PTON) stock has had a winning 2020 so far as the company gained customers while a large segment of the populace was forced to stay home due to COVID-19. There had been a start of a re-opening this summer across the U.S., but now a resurgence of coronavirus outbreaks is creating the need for a second wave of closures as some states pause or reverse their reopening efforts. This development, in addition to Peloton's new business deal with streaming media provider Roku (NASDAQ:ROKU), have provided an additional boost for Peloton shares.

If you are considering buying some of this consumer discretionary stock for a company known for its pricey exercise bikes and treadmills, as well as its digital fitness programs, it would definitely help to know more about how Peloton management is operating in the time of COVID-19. 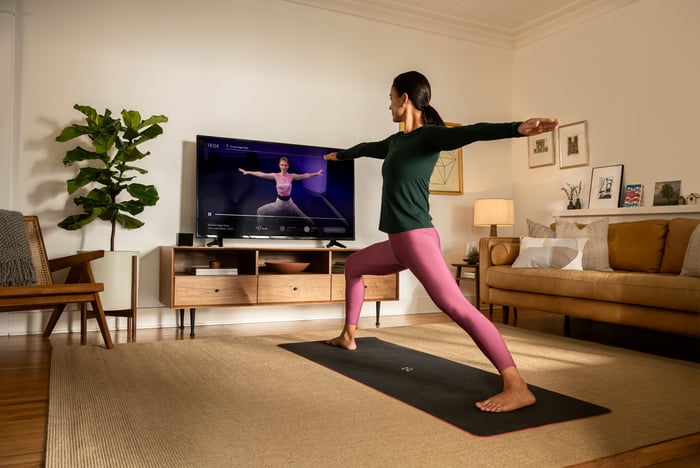 Re-openings have been bumpy, and some continue to avoid gyms

The fitness company's fiscal third quarter (ending March 31) growth was impressive, with a 94% increase in subscribers year over year. In the second half of the quarter, the closures and shelter-in-place orders were boosting growth as more people were forced to work out at home. CEO John Foley said that "the shelter-in-place and work from home realities have created a meaningful tailwind for Peloton and a broader ongoing consumer shift toward that home fitness experience." However, these tailwinds for Peloton appear likely to continue even as the U.S. reopens amid COVID-19.

While most states reopened following a widespread shutdown across the U.S., some are pausing certain aspects of their plans due to a possible rise in infections. While gyms were not necessarily ordered to close, many states put restrictions on restaurants or larger gatherings. These policy recommendations may make some people more cautious about returning to public gyms, possibly increasing demand for Peloton's home workout offerings.

In a July 13 poll by Morning Consult, only 20% of Americans said they were comfortable going to a gym. Some researchers believe that a segment of the population may be hesitant to return to public gyms for an extended time.

Furthermore, about 25% of Americans said they don't miss working out in a gym or studio, according to medical website Healthline's June survey. This could indicate a shift in some consumers' exercise habits and preferences, spurred by the COVID-related closures. This portion of gym-goers may shift some of their resources and time to home-based or other types of workouts (potentially benefitting Peloton).

Peloton's partnership with Roku will help with customer acquisition

On July 1, Roku announced that Peloton classes would be streamed on Roku devices. This gives Roku subscribers access to Peloton's instructor-led workouts, including cycling, running, yoga, cardio, boot camp, and meditation. Subscribers don't need to have Peloton equipment either -- they can work out with or without Peloton bikes or treadmills. New subscribers receive a free 30-day trial, then pay $12.99 per month for continued use.

While Peloton's 176,000 digital subscribers comprise a smaller number of its overall 2.6 million members as of the end of March, the Roku partnership will likely help to boost this figure in the future. Furthermore, this will put the workout company's fitness classes in front of millions of new customers. Roku has nearly 40 million monthly active users in the U.S., according to Statista.com. This introduction to Peloton may just help drive purchases for value-priced equipment that the company is planning to introduce.

Overall, Peloton's business appears to have room to expand, with several factors working in its favor. While it appeared that "stay-at-home" companies may have been losing steam with the reopening of the U.S. economy, Peloton's deal with Roku and a shift toward non-gym workouts will likely support its ongoing revenue and membership growth.