A second lockdown might be in the cards -- and the financial impact could be catastrophic.

Back in March, when COVID-19 first took hold in the U.S., the country reacted by largely shutting down, and while that did a number on the economy, it served the very important purpose of curbing the spread of the outbreak. Since then, much of the country has reopened -- and while that's helped the economy to some degree, it's also made the spread of COVID-19 much worse.

To date, there are already 4 million COVID-19 cases in the U.S., and the problem is getting so out of hand that health experts are urging leaders to shut down once again. But will there actually be a second lockdown that mimics the extreme nature of the one we saw months ago? 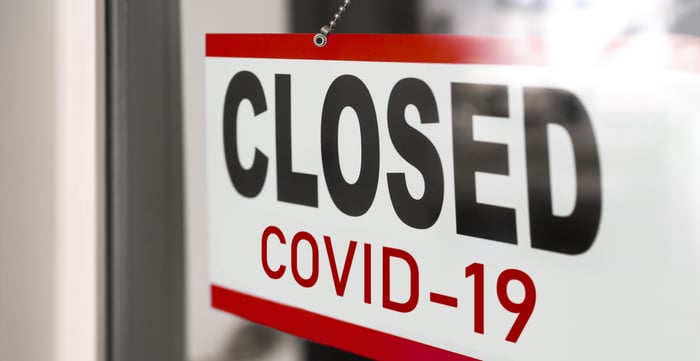 The case for a second lockdown

Though many states have reopened gradually over the past few months, it's clear that some did so too soon. And now local leaders are imposing smaller restrictions in an effort to play catch-up and contain the pandemic. But if those smaller steps prove fruitless, a massive lockdown might be the only course of action to avoid overwhelming hospital systems across the country -- a problem that was rampant in the Northeast back in March and April.

Another reason we might see a widespread lockdown? President Trump wants to see children back in school, but right now, daily case rates don't support doing that in much of the country. With a new term starting in August and September, now's the time to get the pandemic under control to safely reopen schools.

Finally, there's the mask debate. Though health experts changed their tune on masks from their initial "there's no need to wear one" stance, they've been convinced for a while that masks are an effective tool in curbing the spread of COVID-19. But unfortunately, a lot of Americans still won't wear them, so locking down might be the only choice.

The case against a second lockdown

The first lockdown drove tens of millions of Americans into unemployment, resulting in the highest jobless rate on record since the Great Depression. Thankfully, unemployment fell in both May and June, but if another lockdown is imposed, it could drive the jobless rate back up again, leaving many more millions of Americans in a dire financial predicament.

Let's also remember that unemployment doesn't just hurt the people who lose their jobs; it hurts the entire economy. If an overwhelming percentage of Americans become or remain unemployed due to a second lockdown, landlords won't get to collect rent, small businesses won't get to collect revenue, and hopes of quickly busting out of our current recession will get dashed overnight. Even if a generous relief package is put into place -- one that's comparable to the CARES Act that was passed back in late March -- it might not be enough to pull the economy out of the deeper hole it's apt to plunge into if another lockdown ensues.

Finally, a widespread lockdown could tank the stock market like it did back in March, sending portfolios and retirement plan values crumbling. And that alone is a scary thought.

We don't know if a second massive lockdown will come to be, but it's in everyone's best interest to gear up for that possibility. For those who are still working, that means making an effort to ramp up on emergency savings, boost retirement plan contributions (in case those need to be stopped later on), and diversify investment portfolios before stock values plummet. For those in a strong enough financial position, it could also mean hanging on to extra cash in case opportunities arise to buy quality stocks for relatively low prices.

A second lockdown could cause untold economic damage and make an already dire situation even worse. But if the spread of COVID-19 continues at its current rate, that might be the only choice -- and that's something the public needs to prepare for.