Just when the worst of the COVID-19 pandemic seemed to be behind us and things were looking up in June, a surge in cases across several key states has underscored the harsh reality that the pandemic is far from over. The second climb in cases has affected families across the United States who are concerned about schools reopening, wondering when life will get back to normal, and deciding whether it's safe enough to take a summer vacation.

As a result of rising cases, airlines have seen a plateau in demand, which is pressuring airlines to dig in and prepare for a long recovery. Although the industry is hurting, there are a few good reasons why you'd be smart to buy the industry leader, Southwest Airlines (NYSE:LUV), for the long term. 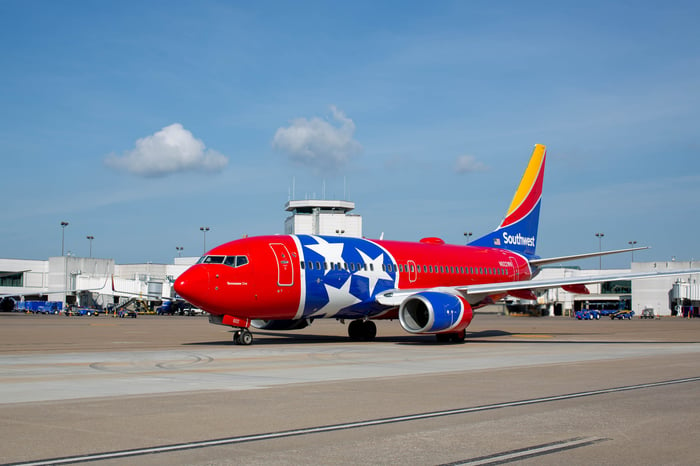 With airlines losing money, the primary focus for an industry recovery has been to reduce daily cash burn as much as possible. The numbers were bad in April, with American Airlines (NASDAQ: AAL) spending $100 million per day at one point and Delta Air Lines (NYSE:DAL) expecting $70 million in cash burn per day in the second quarter. Estimates have since come down, but cash burn remains a serious concern.

The key takeaway is that Southwest's cash burn has improved substantially from earlier in the year thanks to a rise in air traffic and $7 billion in reduced spending for the year. The company also demonstrated how quickly things can improve even with a slight increase in air traffic, as we saw in June.

It's hard to argue that Southwest has anything short of the best balance sheet in the industry. Southwest's CFO, Tammy Romo, noted during the company's second-quarter earnings call that Southwest is "the only domestic airline to be rated investment-grade by all three rating agencies even after debt raises." Although the company's debt load has increased, its debt-to-equity ratio remains the among its peers. 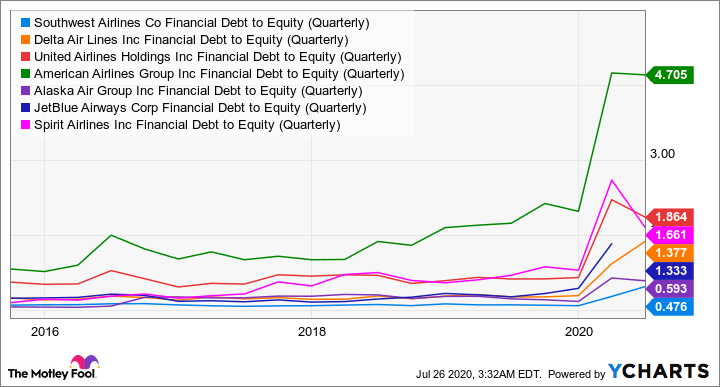 Debt to equity is a way to determine a company's financial leverage by dividing its total liabilities by its equity.

Excluding the help from the CARES Act and other special items, Southwest lost $1.5 billion in the second quarter. Losing money is never a good thing, but with a net cash position of $4 billion and total liquidity of $15.5 billion, Southwest has bought itself some time to wait for things to turn around.

Unlike other airlines, Southwest has promised to book flights to a maximum of two-thirds capacity at least through October in an effort to keep the middle seat vacant for social-distancing purposes. That move may cost Southwest some revenue in the short term, but it could go a long way for customers who are hesitant to travel.

Two of Southwest's competitors, American Airlines and United Airlines (NASDAQ:UAL), currently have no capacity caps in a desperate attempt to boost short-term revenue at the potential expense of passenger safety. Although that might work, it wouldn't be surprising if some passengers question this decision and decide to fly with a different airline. Whether that alternative airline is Southwest or not, I believe Southwest has chosen the high ground with its decision to limit capacity. For me personally, that goes a long way to show that Southwest is an airline built for the long term.

Southwest Airlines entered 2020 with the best balance sheet in the business. Its ability to reduce cash burn and maintain a healthy balance sheet without jeopardizing customer safety speaks volumes about its values.

The airline industry continues to be one of the most severely impacted industries, and that's likely to continue for a few more quarters. An investment in Southwest at this time has its risks and could take years to pay off, but considering the share price has come down substantially -- and Southwest remains one of the best in the business -- I think that picking up a few shares and parking them away for a while could be a smart move.