Please ensure Javascript is enabled for purposes of website accessibility
Log In Help Join The Motley Fool
Free Article Join Over 1 Million Premium Members And Get More In-Depth Stock Guidance and Research
By Daniel Foelber – Jul 9, 2020 at 7:34AM

Use this roadmap to invest in the airline sector right now.

Although the stock market is near an all-time high, there are still many sectors that remain below their pre-pandemic levels. One of those sectors is the airlines, which for months have been a fierce battleground between those who think the worst of the pandemic is behind us, and others who expect a prolonged slowdown in air traffic.

For everyone in between, airline stocks present a high risk/high reward opportunity in need of a roadmap. This article is meant to help you determine if buying or selling airlines is right for you, as well as what to look for when shopping for top airline stocks. 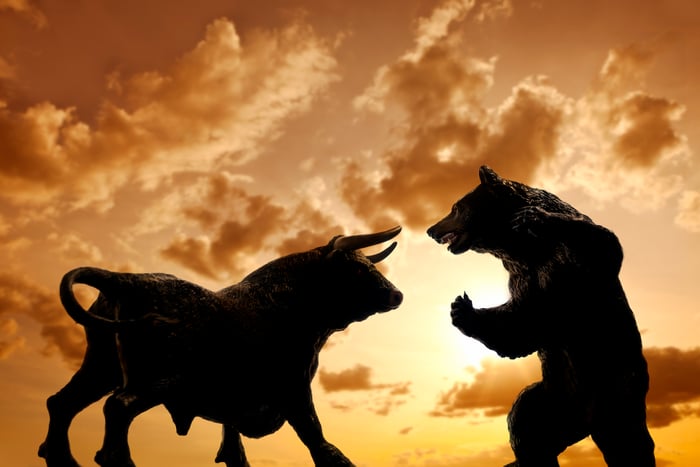 Since reaching their lows in early May, airlines have enjoyed a nice recovery, but are still down substantially for the year. 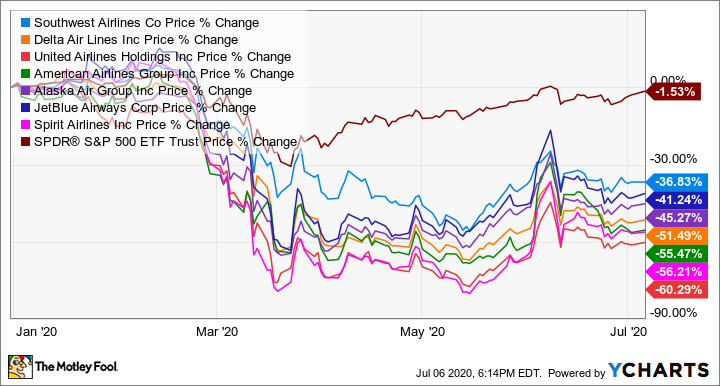 As you can see, airlines are not all performing the same. There's a big difference between the performance of Southwest Airlines (LUV 1.53%) and United Airlines (UAL 1.67%), and a lot of that has to do with varying degrees of financial strength.

The first main aspect to consider when you're thinking about buying or selling an airline stock in this market is the strength of its balance sheet. In a time when air traffic and revenues are substantially lower than normal, it matters how strong a company is financially, more so than even how efficient the company's operations are. Therefore, a company with a lot of cash and ample credit is preferred over even the most efficient airlines. This isn't to say that operational strength doesn't matter -- it does -- but it matters less in a crisis, especially one of this magnitude. 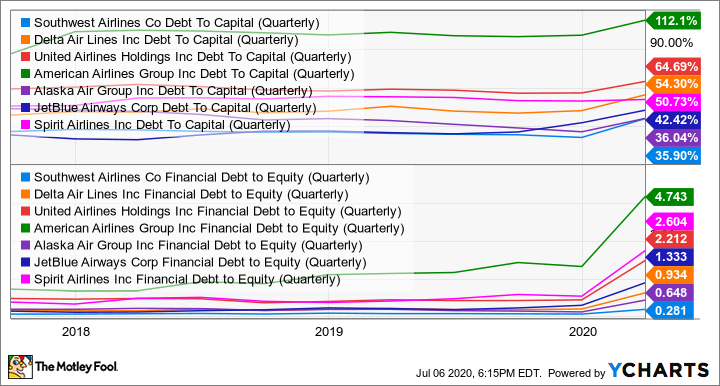 From a balance sheet perspective, Southwest Airlines is the best. This shouldn't come as a surprise to those who have been following the industry for a while. Yet even Southwest is concerned, citing cost and spending cuts, an earnings collapse, and the need for government support even with its "fortress balance sheet."

Another point to consider is the daily cash burn rate, which is the amount of cash an airline is losing every day. Many of the prior estimates from late April have been revised to reflect improvements to air traffic as states reopened their economies.

Some revisions have been staggering. For example, American Airlines (AAL 0.56%) was burning around $100 million per day in April. Although it has improved since then, the company's cash burn is still among the highest of all airlines, and higher than that of Delta Air Lines (DAL 1.77%) and Southwest, even though they are around three times American's size.

Even though nearly all of the major airlines have revised their April estimates to reflect less harmful daily cash burn, it's still cash burn. There's no sugarcoating that their businesses have gone from making money to losing money.

Another estimate that airlines are conveying to investors is how much cash they have on hand to handle an ongoing cash burn. Southwest forecasts that it has two years of cash on hand, based on its revised cash burn rate of $20 million per day.

It gets tricky once you realize how sensitive these estimates are. For example, Southwest's cash will only go half as far if its burn rate increases to around its original April estimates. That could happen if the rise in COVID-19 cases in Texas, Florida, Arizona, and other states brings a second wave of shutdowns.

Digging deeper into the cash burn numbers, it's clear that some airlines are not taking the pandemic as seriously. For example, Delta and JetBlue Airways (JBLU 0.63%) blocked middle seats on their domestic flights, and Southwest has ensured that it will not book a single flight at more than two-thirds capacity. On the other hand, American Airlines was keeping planes at 85% capacity, but starting July 1, it resumed booking to full capacity, if possible. United and Spirit Airlines (SAVE 0.09%) also aren't capping capacity. Therefore, although American has substantially decreased its cash burn estimates, that assumption is grounded in the fact that it isn't restricting capacity on its planes.

It's hard not to notice that the airlines with the loosest attitudes about capacity are also the ones that have the weakest balance sheets and whose stocks have been hit the hardest by the pandemic. Ignoring social distancing advice in an effort to maximize the revenue from a plane may help their short-term numbers, but it also could rub customers the wrong way or even dissuade passengers from traveling with these airlines altogether.

Pick what's best for you

Airlines aren't for everyone. If you have a long-term time horizon and believe that airline traffic bottomed in the second quarter, will gradually increase in the third and fourth quarters, and will return somewhat to normal next year, you should probably be a buyer of airlines. If you have a short-term time horizon, believe a vaccine could take a while to implement, and believe that there could be a second wave of COVID-19 cases that causes airline traffic to regress and stall at Q2 levels, you may want to sell airlines.

Even if you're somewhat undecided, my advice would be to only consider the best of the airline stocks, which would be mainly Southwest and Delta, and maybe the small but strong airlines like Alaska and JetBlue. These companies could provide a strong long-term investment. With this comes a good amount of risk, but you'd be doing yourself a favor by backing only the best in the sector.