These market-beaters could power your portfolio through the next decade and beyond.

While value stocks with low earnings multiples and high dividend yields have traditionally held up better during periods of economic volatility, growth stocks have been the best performers amid this year's unprecedented conditions. Second-quarter results are rolling in, and tech-focused growth companies are crushing expectations and proving they're positioned to thrive amid the fast-changing realities of the global economy.

A staggering 96% of tech companies that have reported second-quarter results have beaten the market's expectations, according to Refinitiv. Take a glance at performance for the growth-heavy Nasdaq-100 Technology Index compared to the Russell 1000 Value Index to get an idea of how the S&P 500 has been pushed back into positive territory on the year after March's coronavirus-driven sell-offs: 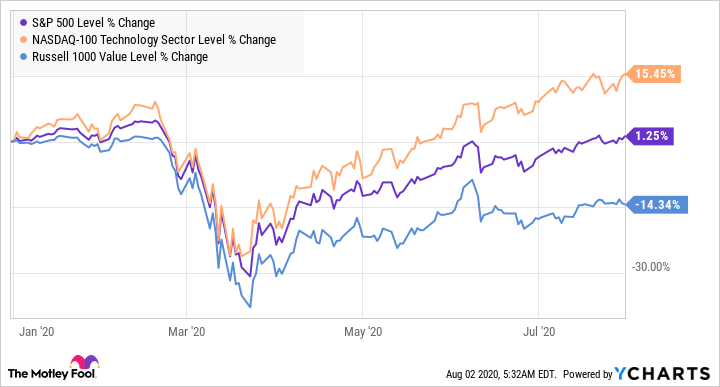 The rest of the year may bring additional twists and turns, but industry-shaping technology companies are showing they can add defensive fortitude to portfolios in addition to delivering huge gains. Here's why investors seeking sturdy companies that can also deliver market-crushing returns should consider buying Cloudflare (NET 7.25%), StoneCo (STNE -0.60%), and Glu Mobile (GLUU) this month. 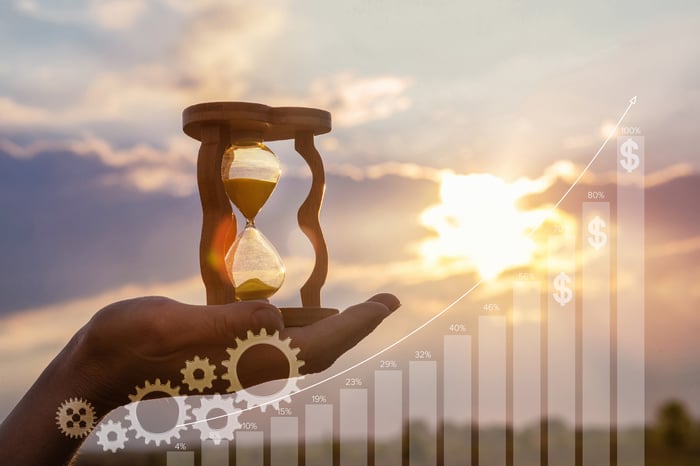 Cloudflare provides web security and infrastructure services and has managed to increase its revenue at a compound annual growth rate of 50% from 2016 through 2019. The company protects and facilitates operations for more than 27 million websites and applications worldwide, and its business is primed for huge growth as commerce increasingly moves to digital channels and the threat of cyber attacks increases.

Cloudflare has a market cap of roughly $12.5 billion and is priced at roughly 32 times this year's expected sales -- a valuation that reflects high expectations and still leaves room for stellar growth over the long term. Last quarter, the company increased its revenue by 48% year over year and posted a 78% non-GAAP (adjusted) gross profit margin. Growth will likely come in lower when Cloudflare reports second-quarter results on Aug. 6 (due to suspended billing offered to customers in response to COVID-19), but a strong gross margin and sales momentum suggest the business will eventually be very profitable.

The company's strong positions in web and security infrastructure could also create foundations for branching into new categories that bolster long-term growth. Cloudflare recently launched a new serverless computing service that allows customers to pay for cloud computing based on actual data usage for their applications instead of pre-purchased allotments. That kind of flexibility, combined with Cloudflare's security strengths, has the potential to be disruptive in the category and help attract business from the surge of new domains and applications hitting the web.

The cybersecurity company's core business looks very strong and should see tremendous growth over the next decade. If the company can leverage its leading position in web domain protections and continue innovating in areas that accelerate its growth engines, Cloudflare stock could be a world-beater.

Card and mobile-based payments have become the norm in the U.S., and the Federal Reserve estimates that just over a quarter of total transactions conducted in the country last year used cash. With roughly 94% of U.S. adults having a bank account, the use of convenient digital-based payments makes plenty of sense. However, cash is still king in many other parts of the world, and investors have opportunities to profit as digital payments gain ground internationally.

StoneCo is a Brazil-based payment processing and fintech services company that's helping spur adoption for digital payments in Latin America, and it has a huge runway for growth over the next decade and beyond. Research from CellPointDigital estimates that 85% of transactions in Latin America were conducted in cash last year, and just 39% of people in the region have an active bank account. Strong growth for payment-processing services appears inevitable.

With roughly 210 million people in Brazil alone, StoneCo has a huge addressable market to tap into -- and the business looks poised to benefit from a variety of favorable trends. E-commerce accounted for less than 5% of total Brazilian retail spending last year. Online retail is poised for rapid expansion in Latin America, and growth for the industry will create big tailwinds for payment-processing services.

Even with adverse impact from COVID-19 last quarter, StoneCo managed to grow its annual sales nearly 34% in the period. Total payment volume conducted across its platform rose 42%, and total active clients reached 531,300 -- up nearly 74% year over year.

StoneCo is already consistently profitable and trades at roughly 80 times this year's expected earnings. The company has a market cap of roughly $13 billion, and its valuation could soar as it brings more merchants on board its platform, takes a cut of rising payment volumes, and builds out its fintech services ecosystem.

If you invested in almost any video game company over the last five years, you would have likely enjoyed fantastic returns. The flip side of this is that the industry doesn't have many public companies in the small-to-mid-cap range anymore, so finding potentially explosive stocks in the space may be more challenging.

Glu Mobile is a game publisher with a market cap of roughly $1.6 billion, and its current valuation could wind up looking extremely cheap just a few years down the line. The company's core video game franchises, including Covet Fashion, Design Home, and Tap Sports Baseball, should continue putting up dependable sales in the near term, and successful new releases could kick the company's sales and earnings growth into overdrive.

Glu has a social media platform for interactive storytelling in the works, at least two new sports games in development, and a new game from CrowdStar (the studio behind Design Home and Covet Fashion) set for release in 2021. The company's stock could soar if just one of these projects turns out to be a hit. Tailwinds including an expanding global audience for video games and rising player spending are helping industry players post stellar returns, and a single highly successful title can drive huge earnings growth and lead to stellar returns.