Please ensure Javascript is enabled for purposes of website accessibility
Log In Help Join The Motley Fool
Free Article Join Over 1 Million Premium Members And Get More In-Depth Stock Guidance and Research
By Leo Sun - Aug 7, 2020 at 11:00AM

UA was once considered the “next Nike” -- but its high-growth days are arguably over.

Under Armour's (UA 1.60%) (UAA 0.92%) stock was cut in half this year, as the COVID-19 crisis exacerbated its ongoing declines in its main North American market. The athletic footwear and apparel maker had already been struggling with tough competition, tariffs, regulatory probes regarding its accounting practices, and abrupt management changes -- but the pandemic amplified all those problems. 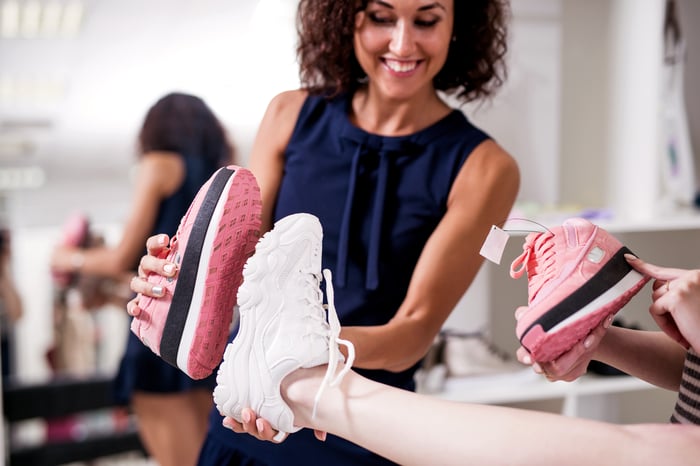 UA didn't offer any guidance for the second half of the year, but it expects to offload a "critical mass of sales to the off-price channel," which will reduce its inventories but crush its gross margins. For the full year, analysts expect its revenue to decline 26% and for its earnings to stay in the red.

In other words, UA's stock probably won't rebound any time soon. Therefore, investors should forget about UA and take a closer look at its bigger rival Adidas (ADDYY -0.92%) -- which could recover at a much faster rate over the next few quarters.

Adidas is beating Under Armour in North America

Under Armour's revenue from North America, which accounted for 69% of its top line, declined 2% in 2019. It's been struggling in this core market for years, due to poorly received designs, competition from Adidas and Nike (NKE 0.85%), and heavy promotions, which eroded its brand and margins.

UA also secured fewer endorsements from professional athletes than Nike, and former CEO Kevin Plank's controversial endorsement of President Trump in early 2017 alienated many of its customers and endorsers. It also refused to expand into the higher-growth athleisure market.

By comparison, Adidas' revenue in North America, which accounted for 22% of its top line, rose 13% in 2019. Instead of mainly focusing on U.S. athletes, Adidas secured partnerships with celebrities like Kanye West, who created its popular Yeezy brand; Beyoncé, who developed signature products for Adidas and internally relaunched her own Ivy Park brand; and Kylie Jenner, who promoted Adidas' Falcon sneakers.

Those celebrity-backed campaigns, along with the popularity of Adidas' foam-based "Boost Technology" soles for runners, complemented the expansion of its e-commerce and brick-and-mortar stores across North America.

UA and Adidas both posted steep sales declines in North America in the first half of 2020 as the pandemic shut down stores, but Adidas' underlying strength points to a much faster recovery.

Under Armour is barely keeping pace with Adidas in Asia

UA's growth rate is passable, but it's barely keeping pace with Adidas' much larger business. Unlike Adidas, which launched aggressive localization efforts with regional celebrities and country-specific collections, UA's expansion campaign in Asia closely mirrored its strategies in North America, with the addition of a few campaigns featuring regional athletes. UA's current focus on cutting costs will limit its ability to ramp up those efforts, and could cause it to fall behind Adidas in this competitive region.

Adidas has a clearer strategy than Under Armour

Much of Adidas' growth -- which lifted its stock roughly 250% over the past five years even as Under Armour's stock plunged nearly 80% -- was buoyed by a five-year turnaround plan it launched in mid-2015.

That plan called for the faster production and rotation of its products, the expansion of its direct-to-consumer channels (especially brick-and-mortar stores in urban centers), and deeper engagement campaigns with its customers, retailers, and partners. As a result, Adidas's annual revenue rose 40% between 2015 and 2019, and its expanding margins boosted its EPS by nearly 200%. 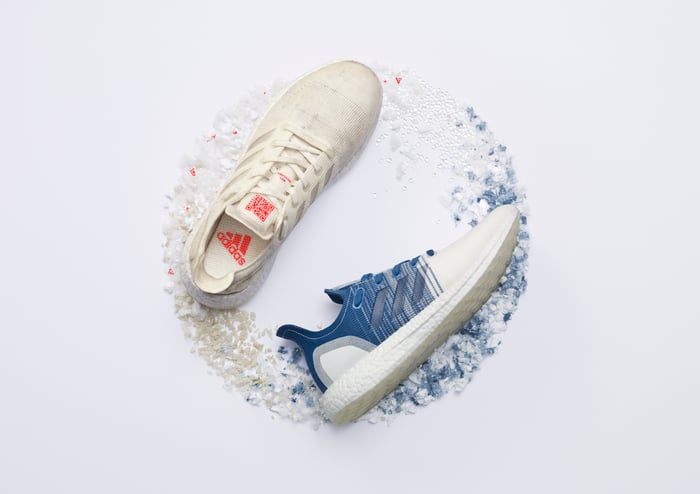 Meanwhile, Under Armour has struggled to keep its promises. In 2015, it boldly declared it would generate $7.5 billion in annual revenue by 2018 -- but it generated just $5.2 billion in sales that year. UA also tried to build a digital ecosystem with mobile apps, fitness trackers, and other connected devices, but it downsized that "connected fitness" business over the past three years to cut its losses. Last year, Kevin Plank resigned amid accusations that the company had dumped its inventories in off-price channels to boost its reported revenue.

Adidas CEO Kasper Rorsted also warned the COVID-19 crisis would make 2020 a "very painful year" during last quarter's conference call. However, Adidas isn't suffering from the management, execution, and accounting issues plaguing Under Armour -- so it will likely recover more quickly when the pandemic ends.

Under Armour was once hailed as the "next Nike". Unfortunately, it failed to capitalize on that early momentum and widen its moat against Adidas and Nike. So when Adidas and Nike struck back, UA was caught hopelessly off guard. Under Armour isn't doomed yet, but its high-growth days are arguably over. Investors looking for a better-run footwear maker should simply stick with Adidas instead.