Roku (ROKU 0.83%) reported earnings results that were better than Wall Street analysts expected, but investors still sold off shares of the growth stock after digesting its letter to shareholders. Although all of the core metrics at Roku -- revenue, accounts, hours streamed -- saw strong results, management reiterated its uncertainty regarding the overall TV ad market.

"We believe that total TV ad spend will not recover to pre-COVID-19 levels until well into 2021," management wrote in its release. "We remain confident in our ability to grow our ad business, albeit not as much as we would have expected prior to the pandemic."

Those comments have some investors worried. At the start of the year, management said it expected to grow revenue about 42% in 2020. Investors have lowered their expectations since then, but Roku still managed to grow its top line 42% year over year in the second quarter.

While revenue growth may continue to slow in the back half of the year and the early part of 2021, the underlying investment thesis for Roku remains intact: Consumer behavior is shifting toward more streaming, particularly ad-supported streaming, and Roku is best positioned to capitalize on that trend. 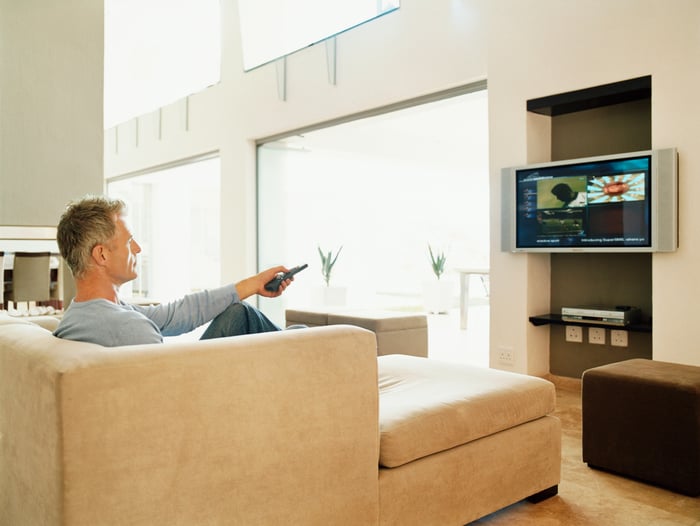 While TV ad spending is declining, Roku grows its ad revenue at a rapid pace. As a result, it's taking share of industry TV ad spending even as the overall pie shrinks. When the pie starts to grow again -- whether that's next quarter or next year -- Roku will see a significant boost as it leverages its share gains.

Not only is Roku taking share of the overall TV advertising market, it's working to beat back competitors like Amazon and The Trade Desk.

Roku revamped its Dataxu demand-side platform, relaunching OneView last quarter. "It really expands the book of business that we can do with an advertiser," the head of Roku's platform business, Scott Rosenberg, said on the company's second-quarter earnings call. He also says it's expanding the types of advertisers that can work with Roku now and giving them access to more publisher ad inventory on the Roku platform.

Meanwhile, Roku's inking new partnerships to make its advertising more effective and to produce more measurable returns on investment for marketers. For example, it partnered with Kroger last quarter, which gives it retail data that it can use to compete with Amazon's ad measurement capabilities.

Roku's long-term story remains very much intact, and management reiterated that in its letter to shareholders: "We believe that Roku's products and services are more relevant than ever." And then it posted the numbers to back it up with 43 million active accounts -- rivaled only by Amazon's Fire TV -- but Roku users seem to be far more engaged.

And while Roku just posted a record second quarter, management doesn't see the account growth as a pull-forward of new accounts. "The indicators that we look at seem to indicate that everything is not just a pull forward during the year, that the shift to streaming and the growth in active accounts has just accelerated," CEO Anthony Wood said during the earnings call. In other words, management and investors can expect account growth to remain strong through the rest of the year.

As long as these underlying metrics continue to improve and Roku keeps investing in its ad technology, the long-term story will prove out for the company. When the TV advertising market comes back, it will see strong revenue growth fueled by an expanding and increasingly engaged user base.